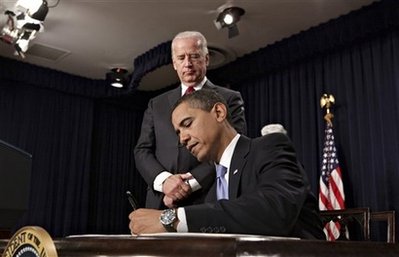 Several days ago, I read a post up at Ace of Spades on another Executive Order signed by Obama:

The Bush “era of secrecy” is over, the Obama “era of labyrinthine secrecy” begins (Hat Tip: The Anchoress)

I don’t know a lot about this EO. It is long and complicated, but what it looks like to me is a further gearing up to go back and prosecute US political leaders such as Bush and Cheney, our military and those in the intelligence communities for acts carried out up to 10 years previously. It also appears to give the President the ability to classify anything requested for under The Freedom of Information Act so that it cannot be accessed.

— There’s a 10 year “default” on declassifying classified info unless a longer time frame was specified and justified.

— Unclassified information may BECOME classified upon submission of a FOIA request for it…thus allowing for a public veneer of openness while reserving the right to clam up if said openness should prove inconvenient when someone actually learns of a document’s existence and has the nerve to request it.

(d) Information that has not previously been disclosed to the
public under proper authority may be classified or reclassified after an agency has received a request for it under the Freedom of Information Act (5 U.S.C. 552), the Presidential Records Act, 44 U.S.C. 2204(c)(1), the Privacy Act of 1974 (5 U.S.C. 552a) …

So much for transparency of government.

Lee also points out that this would actually make it unnecessary to give Interpol documents to hide information. This could very well prove true, but the Interpol EO is far more reaching than just that – see here and here…

From Bob McCarty Writes, news come of another EO signed into being:

Though the always-transparent (NOT!) White House web site contains no news of it, President Barack Obama has reportedly signed an executive order — yes, another one. This time, he’s tasked the United States Postal Service to help distribute countermeasures in the event of a biological weapons attack within the United States.

Why the Postal Service? Because, according to a New York Times report, of its ”capacity for rapid residential delivery.”

And when I read this MSNBC article, this caught my attention (Hat Tip: Friends of Mark Fuhrman):

Chew on that for a minute… I don’t think I even need to explain the implications of that one.

Obama is definitely circumventing our checks and balances by utilizing Executive Orders. He is nudging us more and more each day and grabbing more and more power while reducing our rights in the name of security and what is best for Americans. It would behoove us to remember some quotes: