From this morning’s Wall Street Journal:

“The Supreme Court has ruled that corporations may spend freely to support or oppose candidates for president and Congress, easing decades-old limits on their participation in federal campaigns.

“By a 5-4 vote, the court overturned a 20-year-old ruling that said corporations can be prohibited from using money from their general treasuries to pay for campaign ads. The decision, which almost certainly will also allow labor unions to participate more freely in campaigns, threatens similar limits imposed by 24 states.

“The justices also struck down part of the landmark McCain-Feingold campaign finance bill that barred union- and corporate-paid issue ads in the closing days of election campaigns.”

Here’s the most important part of what the Court said:

“Political speech is so ingrained in this country’s culture that speakers find ways around campaign finance laws. Rapid changes in technology—and the creative dynamic inherent in the concept of free expression—counsel against upholding a law that restricts political speech in certain media or by certain speakers. In addition, no serious reliance issues are at stake.

“Thus, due consideration leads to the conclusion that Austin should be overruled. The Court returns to the principle established in Buckley and Bellotti that the Government may not suppress political speech based on the speaker’s corporate identity. No sufficient governmental interest justifies limits on the political speech of nonprofit or for-profit corporations. Pp. 47–50.”

END_OF_DOCUMENT_TOKEN_TO_BE_REPLACED

“Nobody should be threatened by the White House for doing their jobs as stipulated by law.” – ALG President Bill Wilson

“Congressman Towns should be praised for investigating his own party’s Administration, who in this case threatened an inspector general because he wanted to warn Congress that his budget was too low as proposed for his office to complete its mission,” said Wilson.

Towns is the Chairman of the House Oversight Committee, who in a statement said, “If such statements were made they were entirely improper and pose a direct threat to the independence and integrity of the Inspectors General, and an affront to clear Congressional intent as expressed in statute.

Wilson agreed, saying, “Especially with the inspectors general whose purpose it is to monitor wasteful spending, OMB’s threats to any inspector ought to be investigated.”

Wilson continued, “Under law, any inspectors general who believe that they are being cut either maliciously or in error has a duty to inform Congress, and neither OMB nor any other arm of the Obama Administration should be targeting those inspectors as a result.”

“Nobody should be threatened by the White House for doing their jobs as stipulated by law,” Wilson added.

According to the NY Daily News, MacFarland “alleged that his office got a ‘not so veiled threat from OMB’ that it ‘will make life miserable’ if he informs legislators of his complaint.”

In his letter, McFarland wrote, “I am alerting to you about a very serious matter that represents an attempt to thwart an authority provided to us by the Inspector General Reform Act of 2008 and that creates a risk of compromising our operational independence.”

Wilson called on the Obama White House to cooperate with Towns’ investigation, and to reprimand the budget official responsible for making the threats.

“At this juncture, it would be very appropriate for the Obama Administration to follow protocol and if necessary fire the official who abused his position to keep an inspector general quiet about a policy issue,” Wilson said, concluding, “and to immediately inform Congress of whatever action it is taking to make sure this doesn’t happen again.”

UPDATE: Hurrah! They were stranded in the snow and a rescue helicopter found them. 01/23/10

This has been a wild weather week in California, with rain, snow, sleet, hail, thunder and lightening, etc. Usually, I enjoy this weather. Right now, I find it very worrisome, because close friends of mine are deeply, deeply worried that their nephew and his girlfriend may be trapped somewhere because of this extreme weather. Ryan and Viola left Saturday for a two night camping trip, and haven’t been heard from since. They are very responsible people, and their prolonged silence is ominous.

The family thinks they’re most likely in the Sierras but, really, they could be anywhere in California. Since my friends know I blog, they’ve asked me to put the word out in the blogosphere, just in case any of you in California (or Western Nevada) might have seen Ryan and Viola. Here’s the press release that’s going out today:

Ryan Barrett and his girlfriend, Viola Liu left on Saturday, January 16, at 2:00 p.m. to go camping with their three dogs (2 huskies & a lab) in his red 2005 Toyota Tacoma pick up truck (with shell.) They were scheduled to return home on Monday evening, January 18, 2010. We have not heard from them. We need your help. We filed the attached missing persons report on Wednesday, January, 20, 2010 in the early morning with the Fremont police. The problem is Ryan did not tell us where they were going. Ryan told his father, “We think we’ll go to the Sierra Nevada to play in the snow.” We fear they were caught in the storm.

The police need leads. Our families need leads. We need you to broadcast this to your audience as soon as possible in the hope that someone saw them and we can focus our search efforts. KCBS has already run the story, but I need to reach more people and so many people get their news on line.

Viola is a Chinese-American woman, slim, 31 years old female, 5′7″, brown eyes, brown hair with highlights and a quiet beauty. (The photo makes it look like her hair is blondish, it isn’t)

We have been looking for them since Monday.

Thank you for your help.

If you have any information about Ryan or Viola, please contact the Fremont Police Department, at 510.790.6800. This is the police report, with a picture of Ryan, Viola, and their three dogs: 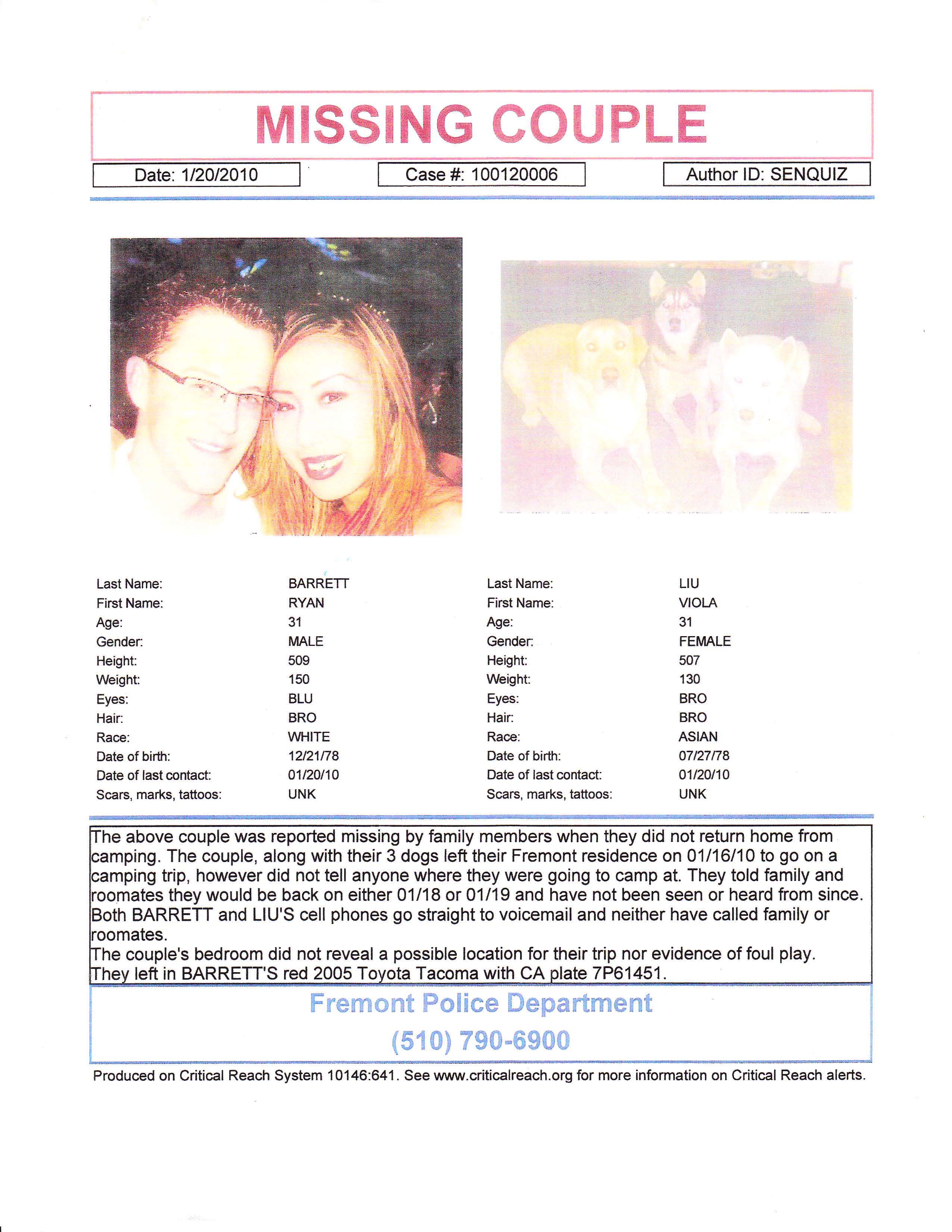 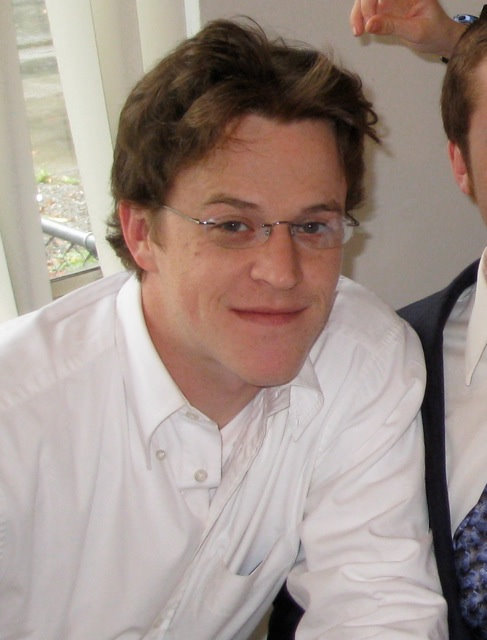 The New Editor – Biden Criticized for Appearing in Hennessy Ads

The New Editor – The Upper-Class Twit of the Year?

Mudville Gazette – The people are stupid

RealClearPolitics – Specter Tells Bachmann To Act Like A “Lady” (Hat Tip: Brian B.)

The Wall Street Journal – Obama Versus Bush on Spending (Hat Tip: Brian B.)

The New Editor – After Senate Special Election, MA in State of Flux

The Strata-Sphere – Stunning: NASA GISS Admits No Evidence of AGW In The US, Won’t Be For Decades!

The Radio Patriot – Obama a Security Risk? Court to decide.

Michelle Malkin – Arlen Specter should work for the Huffington Post

Is America a failed state? (Hat Tip: Brian B.)

Big Banks Have Already Figured Out The Loophole In Obama’s New Rules (Hat Tip: Brian B.)

Assessing Obama’s promises of jobs in a hub of manufacturing

FDIC Chief Got Bank of America Loans While Working On Its Rescue (Hat Tip: Brian B.)

Why Is Opposition to ObamaCare a Surprise?

Economic Freedom: The Key to Making Our Prosperity Enduring

Senate Dems Not Sure Enough Votes to Reconfirm Bernanke

Obama seen as anti-business by 77% of investors

The Global Debt Bomb: “If 2008 was the year of the subprime meltdown, 2010 will be the year entire nations start going broke.”

Why Americans should care about the debt crisis in Greece

Identifying Sure Signs of the Final Economic Plunge

One Million Americans Give Up on Job Searches

From: The Patriot Update