From Lloyd Marcus at the Tea Party Express

When I was talking to the rest of our team about this email I found out that most everyone else had been approached by someone asking them similar questions about a whole range of rumors, accusations, allegations, smears and mischaracterizations of what we at the Tea Party Express are supposedly about.

Seems our friends in the liberal blogs and media outlets (including MSNBC, Media Matters, Huffington Post, TPM Muckracker, Mother Jones, and others) have been doing all sorts of attack hit pieces criticizing the tea party movement as a whole and the Tea Party Express in particular.

And the odd part is, these attacks against the Tea Party Express have made me smile. You see, I realized that if the left wing bloggers and activists who like what Obama, Pelosi & Reid are doing weren’t worried about us in the tea party movement, they’d just ignore us. The fact that the attacks have been stepped up against this movement as a whole the past several weeks shows me the impact we are making.

Here’s what I wrote to my team members at Tea Party Express in response to the attacks:

“You know TPX has become a powerful force when people take shots at you. GREAT WORK! (smile) All the best, Lloyd”

So I tell you what I’m going to do. I’m going to send you an email in the next few days that will debunk all of the crazy attacks and smears being launched against us.

But first, instead of allowing our critics to define us, I thought I should start by showing you what we at the Tea Party Express are really all about. We have a record upon which our promises and pledges to you, our supporters, can be evaluated.

I hope you will also please – FORWARD THIS TO YOUR FRIENDS.

I believe actions our speak louder than words of our critics. Here are just a few of the actions that we at the Tea Party Express have undertaken thanks to your help and support. This is our record of who we are, and we’re proud of it, and I can tell you that I won’t let anyone even try to rewrite this history! Please share these videos with your friends, so they too can learn what the Tea Party Express is all about:

Note: This is was where our PAC Coordinator, Joe Wierzbicki, grew up, so he took on the assignment of organizing this rally. He wanted to send a shout out of appreciation to Arlene Callaghan and the Geist Family for their efforts to make that day in Brighton one our team will never forget!

*Note: We had scheduled the Memphis rally to start at 10:00 PM at night. Local supporters really wanted us to have an event in the Memphis area, but we got in so late for the night that this was the only time we could do it. They said OK! But then we ran about 1 1/2 hours LATE due to massive rallies earlier in the day. So you can see the people waiting around for us at the beginning of the video. Amazingly most of them stayed all that time to be a part of that historic night. It was a remarkable evening!

*Note: When you watch this video above you’ll see one of the many reasons why I am proud to call Ron & Kay Rivoli my friends. “Rivoli Revue” has been on Tea Party Express I and Tea Party Express II and have confirmed with us that they will be on the “Tea Party Express III: Just Vote Them Out” tour. You’re going to love meeting them and joining with them in this fight to take our country back!

*Note: What a fantastic event it was at the Alamo! The crowd was incredible, and I want you all to know how grateful we all are to those who showed up and helped put on this rally. It was a hot day folks. Those of us on stage were melting and drenched with sweat, yet many in the crowd had arrived hours earlier to be there in support and stood in that heat for hours on end. It showed us how passionate the love is for our country by our fellow patriots and how deep the determination is among you to change the course this nation is headed on.

*Note: Washington, can you hear us now? Haha! This is a fun video. The excitement in that room that night was electric! We apparently kept reaching the maximum allowed occupancy in this giant hall which was PACKED. So they kept making people go outside. Local organizers got audio for this secondary outflow rally of an additional 1,000 people, and we sent out members of the team to speak to the crowd and shake hands and discuss the future of this nation, and what we can all do to take a stand in the fight for freedom. An amazing evening. You’ll hear me say that over and over again about so many of these rallies, but it’s true. A sleeping giant has been awoken folks – and we’ve only just begun to fight!

*Note: What do 10,000 patriotic Americans look and sound like? Find out by watching the video clip above!

*Note: I’ve come to find that the tea party folks in Texas know how to put on a tea party! Love the sign, loved the crowd, and appreciate the work of a number of tea party, 9/12, Free Republic and other conservative activists who helped make this possible. Thank you!

*Note: Our team at the Tea Party Express wanted to pass along our special thanks to Lu Ann Busse, Lesley Hollywood, Kathleen Baker, Jeannie K, Amy Oliver and the rest of your Colorado tea party team for working so hard and fast on little notice (bad communication on our end folks, sorry!) and turning the rallies into such fantastic successes! We look forward to seeing you on Tea Party Express III: Just Vote Them Out tour!

*Note: Our rally was scheduled to take place at 10:00 AM on a Wednesday. We braced ourselves for a poor turnout, which we were fearing and quite frankly, expecting. Boy were we wrong!

*Note: Yep! That’s Congressman Joe Wilson, who gained considerable attention after he called out Obama on healthcare with his shout of “You Lie!” What was incredible was how many people turned out that day for this rally. You see, Tropical Storm Ida was just reaching the area with bands of rain and wind, with squall lines that hit the area at the beginning and end of our rally. But not even a tropical storm could stop these patriots from rallying together. Awesome!

*Note: This is one of the few cities where the Left was able to organize any sort of counter-demonstration. It was small, but one of their biggest efforts to protest us during our first two tours. I like how the woman who made this video noted the difference between true, authentic, grass roots signs made by our tea party supporters versus the manufactured signs of our opponents.

*Note: This was another rally where the crowd waited for hours for us to arrive. We left Connecticut earlier in the day in pouring rain. A storm was moving up the northeast coast, and tornado warnings had been out for south New Jersey earlier in the day. Local activists thought turnout would be severely depressed by the bad weather. Then we at the Tea Party Express hit a traffic jam on the way to Toms River, NJ and were delayed by over an hour. But when we arrived we were overwhelmed. The local media called it the largest political gathering there in anyone’s recollection!

*Note: Special thanks to Toby Marie, Michael, Carol, Becky & Greg, and the rest of the Waco Tea Party. There were also tea party groups from the surrounding areas who pitched in and helped make this event such a smashing success. 102 degree heat didn’t stop thousands of patriots from coming together. We honor you all with our thanks for making the effort to get involved and help fight back against the bailouts, out-of-control deficit spending, increased government regulation, reduced liberties, push for socialized medicine and government takeovers or oversight over whole new swaths of the U.S. economy. It was under leadership of both major political parties that these offenses were committed, and we will remember that as we put conservative and constitutional policies ahead of political party affiliation.

*Note: The trick here is to see that near the top of the video screen you can see the bleachers in the back. The seats in this stadium were packed and the people you see at ground level are the OVERFLOW crowd on hand to greet the Tea Party Express. It was an outstanding night of patriotism. We also collected over $1,000 in donations for the families of the Ft. Hood shooting from this great crowd!

*Note: Thank you to the people of Battle Creek who patiently waited for us, stayed into the night, and stayed in rain! What you can’t see is the huge crowd that the speakers are facing. Behind them (and the 2 rows of people behind the speakers) is a pond and lining this pond was a sidwalk packed with hundreds more tea party activists. We are thankful to you all!

*Note: Portland has a strong liberal community, and boy-oh-boy were they unhappy that so many people turned out for our Tea Party Express rally. Apparently the Left thought they had a monopoly on organizing and rallies. Not so anymore!

*Note: One of Obama’s local organizers came out to this event. She was furious with us. Said our buses were racist, our speakers were racist and this movement was racist. Why? Because Barack Obama is 1/2-black; and that the real reason we’re all so upset is because of that. And she was serious. Poor, misguided, woman.

*Note: These were some of the nicest people you will ever meet. They just loved their country and they want to do something to help save it.

*Note: I love this!!! In the San Francisco Bay Area we still found thousands of patriots who are committed to the fight for our country’s future!

And now, as we look to to the future I refer you to this story from Fox News showing what we’re taking on next. Calling it “The most ambitious of the tea party events planned” they had this to say about the Tea Party Express III: Just Vote Them Out tour: 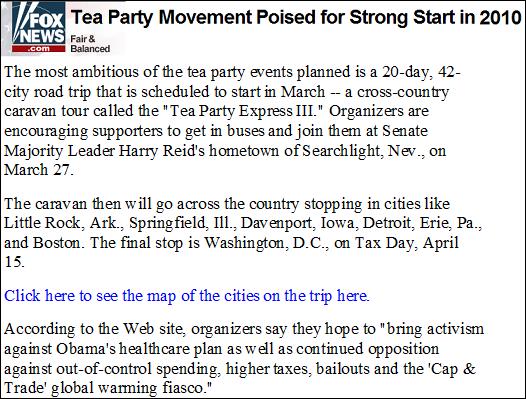 *Final note: Be sure to RSVP your attendance at one or more of our Tea Party Express III: Just Vote Them Out rallies on Facebook. You can also invite your friends on Facebook to come join us as well. Complete details – HERE.