Yesterday, we broke a story before Drudge on Obama bowing to the Mayor of Tampa. To me this looked racist… What is Obama going to do, bow to every person in America who is part Asian? How about fist-bumping anyone who is African American? I thought his bowing was reserved for totalitarian dictators and groveling before foreign leaders whatever their stature… 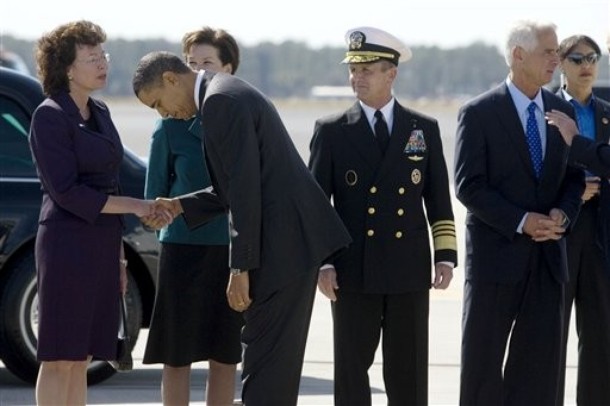 But it gets even better. Guess he also bows to those who honor CAIR. Lookie here: Tampa mayor, Pam Iorio, proclaimed Nov. 15th “CAIR Day”

What is going on, when CAIR, an organization that is an outgrowth of the Muslim Brotherhood/Hamas infrastructure, gets a day named in their honor in Tampa Florida?

Mayor Iorio is the second female mayor in Tampa and is married to Mark Woodard, assistant county administrator for Pinellas County. She also has pioneered the following:

The Mayor’s Youth Corps was initiated in 2003. A service-oriented leadership program for a select number of Tampa’s teens, the Youth Corps provides an opportunity for involvement in community service projects, leadership development activities and the production of an award-winning television show From the Corps.

Progressive much? Sounds like one of Obama’s Youth Corps. I’m sure there are some youth programs out there that are good. But honestly, when I hear words like ‘Youth Corps’ and ‘service-oriented’ and ‘community service’ in connection with an admitted progressive, it gives me the creeps.

So Obama bows to those who are:

A. Decidedly progressive and wish to foist Youth Corps on our children.
B. Those who honor CAIR; an organization that supports radical Islam and terrorism and has ties to Hamas and the Muslim Brotherhood.

Tampa will be recognized as a diverse, progressive city; celebrated as the most desirable place to live, learn, work, and play.

And while Mayor Iorio does speak at length on honesty and ethics, one has to wonder if she just didn’t know how evil CAIR is, that she didn’t care or that the ends just justify the means whatever they are via Saul Alinsky and Rules for Radicals. And that Obama would bow to a Mayor who just proclaimed Nov. 15th, CAIR day in Tampa, Florida really begs the question of just what agenda is he so in favor of and is religion part of his progressive agenda?

5. ABC News: “If church attendance is one measure of a man’s faith, then President Obama may appear to have lost some of his. The first family, once regular churchgoers, have publicly attended services in Washington just three times in the past year, by ABC News’ count, even bypassing the pews on Christmas Day.”

Have they checked the mosques?

5 thoughts on “Bowing to Islam and CAIR”