“No family could sustain itself in such a manner, nor can any nation which robs from future generations to purchase temporary, illusory prosperity. It is both immoral and profoundly foolish.” — ALG President Bill Wilson

ALG Condemns House for Raising National Debt by $1.9 Trillion, And for Forcing the American People to Pay for It

February 4th, 2010—Americans for Limited Government President Bill Wilson today condemned the U.S. House of Representatives for voting to increase the national debt ceiling by nearly $2 trillion, saying “the American people are under absolutely no obligation to borrow yet more money to pay for Congress’ unsustainable level of spending that threatens the nation with true default.”

“The obscenity of this vote is nearly limitless,” Wilson said, adding, “This is the equivalent of requesting a credit limit increase on a son or daughter’s MasterCard to help pay interest — not even pay down the principal — on the family Visa card that is maxed out.”

“No family could sustain itself in such a manner, nor can any nation which robs from future generations to purchase temporary, illusory prosperity,” Wilson explained. “It is both immoral and profoundly foolish.”

“The House has once again voted to kick the can down the road instead of bringing the nation’s finances into proper order,” Wilson said, adding, “The House has now voted to permanently shackle the American people to a mountain of debt that cannot be paid back, further pushing the nation along the road to financial Armageddon.”

Moody’s has warned that the United States’ Triple-A debt rating could be in jeopardy “if the current upward trend in government debt were to continue and become irreversible.”

Barack Obama’s proposed 10-year budget will add $10.6 trillion to the national debt, totaling in $25.77 trillion in total debt come 2020. That averages $1.06 trillion every year added to the nation’s debt.

As a result, the nation’s Triple-A debt rating “could come under downward pressure,” according to Steven A. Hess, senior credit officer at Moody’s.

This legislation, H.J. Res. 45, will increase the national debt ceiling by $1.9 trillion to $14.294 trillion when signed by Barack Obama. House Democrats have said that a failure to pass the debt increase would result in “default.”

“If this bill had failed, the U.S. would not have failed to pay interest on its debt obligations nor to make debt payments,” Wilson explained. “Therefore, the nation was not going to default, unless House Democrats are stipulating that the U.S. actually needs to borrow more money simply to make national debt payments.

“What would have happened if the vote failed is the U.S. would not have been able to borrow any more money for so-called ‘mandatory’ spending,” Wilson added.

Wilson said that the U.S. was at “considerable risk of default,” not from any failure to increase the debt ceiling, but from Congressional “refusal to restrain current exorbitant spending.”

“Default will only result because we have increased borrowing to unsustainable levels, which is what increasing the debt ceiling by nearly $2 trillion represents,” Wilson said, noting that in Barack Obama’s proposed 2011 budget, interest paid on the national debt is $251 billion, or 9.7 percent of total projected revenue.

“By 2020,” Wilson said, “interest owed on the national debt will more than triple to an unprecedented, unsustainable $840 billion annual cost, or 17.8 percent of total revenue.”

“After that, it gets even worse,” Wilson warned, predicting that eventually, “simply paying interest on the debt owed will overtake the national budget, to say nothing of ever being able to pay down the principal owed.”

The previous national debt limit was currently $12.394 trillion, and that limit was set to be reached by the end of February.

Wilson noted that the debt increase was tied to so-called “Pay-Go” rules, requiring either tax increases or spending cuts to pay for any increases in spending. “Since approximately 56.4 percent, or $2.165 trillion, of the 2011 proposed budget is so-called ‘mandatory spending,’ and ‘mandatory spending’ will increase by $1.219 trillion to $3.384 trillion in 2020 under Obama’s plan, House Democrats have precluded the possibility of ever cutting entitlement spending.”

Wilson explained, “Meaning, the House has just voted to increase taxes by at least $1.219 trillion over the next ten years to pay for the unsustainable increases in entitlement spending that will occur every year.”

Wilson earlier said there was an alternative: “The only solution to the nation’s financial Apocalypse, where Moody’s is preparing to downgrade our Triple-A debt rating, is to reduce spending, not to borrow more money.”

“Instead,” Wilson concluded, “the House chose to bankrupt the nation.”

This cartoon originated nearly 3 months ago in Scotland. It looks like most of the world is laughing at our nation’s “leadership”…and rightly so! 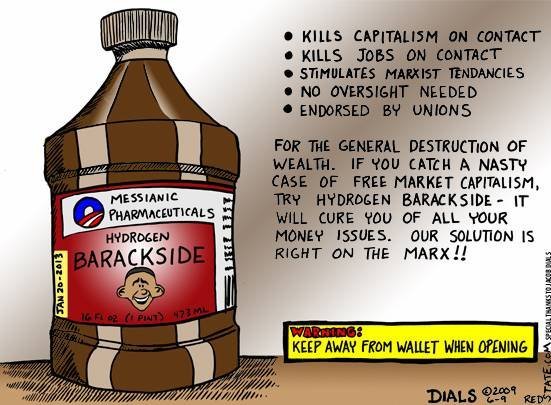 You cannot legislate the poor into prosperity by legislating the wealthy out of prosperity.

What one person receives without working for, another person must work for without receiving.

“You cannot multiply wealth by dividing it.” – Dr. Adrian Rogers 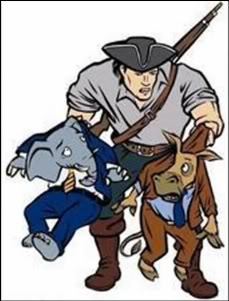 The loyalty to my party ends, when the allegiance to my country begins… – William R. Bauers

Portugal near political crisis over debt

Has Obamacare Already Won? Existing Government Programs to Take Over Health Care by 2012

CAP Clueless on Costs of Cap and Trade

The Public Option Threat Still Buried in the Senate Bill

Is US bullying TOYOTA on recall to help GOVERNMENT MOTORS?

US debt to hit ceiling by end February

Next in Line for Bailout: Social Security

*Harrisburg on the brink

Gov’t to Pay More Than Half of U.S. Health Costs

Dems Close to Vote on Jobs Bill Without Bill in Hand

U.S. Economy: Don’t Worry, Prosperity Is Just Around the Corner

Obama’s Budget Has One Small, Missing Piece…. For $6.3 Trillion Dollars

Unemployment Rises in Most Metro Areas

Roubini Sees “Very Dismal and Poor” US Growth Ahead

Bernanke Voices Economic Concerns as He is Sworn In

Deficit Brings US Closer to Brink of Bankruptcy

Colorado Springs Cuts Basic Services. More than 1/3 of streetlights to go dark on Monday, and that’s just the start.

No Help In Sight, More Homeowners Walk Away

The First Country to Leave the Euro? What About Germany?

US Deepening Debt Crisis, Be Afraid of Bernanke Reappointment

Half-way across the globe,
And we’re standing on new ground
Screaming ‘cross the waves
You can’t hear a sound
There’s no fair trials, no trade, no liberties
No tea!
We’ve colonized America. We won’t stand for tyranny!
O king:

We’ve paid your foolish tax, read the acts
And they just wont do.
We want to make it clear, we believe this much is true:
All men were created with certain
Unalienable rights!
Among these are life-liberty, and the pursuit
Of happiness!

Note: Music and video based on “Apologize” by One Republic, featuring Timbaland (2007)

Yeah baby! Solid gold… “You Talk Too Much!”

Today, the House passed yet another debt limit increase, without a single Republican vote.

As one considers the recent rhetoric of fiscal responsibility from the majority party, perhaps this single image best stands in contrast and serves as a reminder of the Democratic record of fiscal recklessness.

Get More Information At:

The Strata-Sphere – The Probability Of Attack On America Is Now Certain, Would It Have Been Without Miranda?

Doug Ross – Great News! 824,000 Jobs Will Disappear on Feb. 5th. The Obamaconomy rolls on, crushing everything in its path. (Hat Tip: Larwyn)

Atlas Shrugs – Holocaust Mufti Demanded Slaughter of 400,000 Jews ….and got it

We have made the big time. Congressman Barney Frank has linked to an American Daughter article as an example of “right wing media bias” from his official government website!

Family Security Matters – About those Unsustainable Benefits and Entitlements

The New Editor – “My Friend Sarah”

The New Editor – A Stroll Down Extremism’s Memory Lane

ThirdWaveDave – WITH OBAMA THROWIN’ THE DICE FOR AMERICA, IT’S ALWAYS “SEVEN OUT… LINE AWAY” (Hat Tip: The Radio Patriot)

Bookworm Room – What do you get when you cross a Bratz doll with a Smurf? *UPDATED*

The Anchoress – Civil Obama and the Civilizing Press – UPDATE

Bob McCarty Writes – Though Much Has Changed, Obama Has Not

The Washington Times – Pentagon: NKorea to have nuclear tipped missile in next decade

That’s a question that everyone on the Internet better start asking and fast… Two articles today:

Both of these raise serious privacy concerns for individuals on the Internet. And, I for one, believe that this is an effort to control the Internet just as the Diversity Czar, Mark Lloyd and the Regulatory Czar, Cass Sunstein have intended to do all along…

So Google wants to team up with the NSA to protect their investment from the Chinese? Well, considering that we just lowered the threat level on Chinese spying, thanks to Obama, who can blame them? But, I smell a privacy rat here… A violation of our Constitutional rights.

Ask yourself, who do ya trust baby? Do you really trust the NSA not to violate your rights as an American citizen? Do you really think that someone won’t abuse this power in the government? Dream on… The same goes for the police having open access to email and Internet accounts. Most of the time, it would probably be for the general good. But what if someone in the government decides to target an individual or company? Never happen? Just refer back to Obama’s enemies list and the National Security report on extremists in the USA. Remember the one where gun owners, church goers, ex-military and tea party protesters were labeled as threats to the homeland? Well, giddy up, because this could add a whole new dimension to that scenario. And it won’t be warm and fuzzy… It will involve a knock on your door or the door being kicked in.

This seriously gives me the creeps and it will not end well if it comes to fruition. Virtually everyone now is on the Internet in one way or the other. This would be the ultimate tracking tool and could be used however was deemed fit against anyone. It would give the US government, the NSA and law enforcement power to the nth degree… We might do well to remember the words of Benjamin Franklin:

“Those who would give up Essential Liberty to purchase a little Temporary Safety, deserve neither Liberty nor Safety.”

Shocking 2001 video showing a Peruvian aircraft firing at the plane of American missionaries in its crosshairs reignites fury over a possible CIA cover-up.