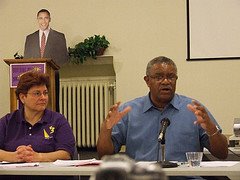 The Tea Party movement should be given an award for the stance they are taking on restoring our Constitution and founding values. And all the hard work they have done and are doing is having a profound impact on the left. They are literally crapping in their undies with fear. Yep – fear…

New Zeal has a post up today on Jarvis Tyner, Vice Chairman of the Communist Party USA. An acolyte of Obama and nothing less than a bigot, he literally invokes violence and hate against the Tea Party movement in his latest hatefest, er, column from People’s World (jeez – a Communist name for a Communist blog – genius! ) : The tea party movement’s backward march.

And Mr. Social Justice spells it out:

Whether they succeed depends on the level of activity of the broad democratic, multiracial, labor and people’s coalition that defeated Bush and his right-wing Congress. If they are activated on the issues of jobs, health care and peace the right will suffer another setback.

Without street heat, without real grassroots organizing, we could loss the fight for change and be pushed back to the Bush era or worse. We dare not let that happen.

Consider the Nashville tea party meeting and the elections in New Jersy, Virginia and Massachusetts a wakeup call.

Like Obama did in his State of the Union speech and his confrontation with the Republicans at their caucus, it’s time for the anti-racist majority, for the majority that wants health reform, a clean environment, massive job creation, peace, and economic and social justice, to take the offensive.

When you read New Zeal’s post, you’ll see that this guy really HATES Sarah Palin. His utter contempt for her may be just the ticket to getting her elected in 2012 – thanks Jarvis! His slurs are juvenile at best and simply moronic. I am sooo tired of the race card being played and the attacks on the right and the family and morals and the Constitution ad nauseam… They have no firm ground to stand on, just the same tired old lies and propaganda that Americans have learned to loathe.

Looks like the Communist Party USA is scrapping for a fight with American patriots… Let’s give it to em’ folks. Keep up the political heat, the Tea Parties and the fight to take our country back from Socialists, Marxists, Communists, Progressives, Radicals and our government. We are poised to push the majority of them out of office and then the real adults can make the really tough decisions needed to bring us back from the Progressive abyss.

One thought on “Communists vs. the Tea Party”