“Nevadans are now rejecting the Obama-Reid attempt to base our nation’s economy around government. Their experiment with a government-run economy means Washington gets to pick winners and losers; under their plan, Washington decides which bridge gets built, which bank gets saved and which industry gets a bailout and a new CEO. In their world view, Washington dictates your wages, your health care and your benefits. Their agenda is so invasive, that under their energy tax proposal, you get taxed for turning on the wrong light.

“If I’m elected to represent Nevada in the U.S. Senate, I will go to Washington to win back freedom and opportunity for Nevadans – not to implement any political party’s agenda. I will go to Washington to get our economy moving again by slashing taxes and removing onerous regulations. I will work to persuade this administration that Nevadans don’t want handouts and government doles – Nevadans just want their freedom and opportunity returned to them. They know what to do with it.”

Tarkanian also had a slightly different take on the President’s recent remarks where he said; “When times are tough, you tighten your belts. You don’t go buying a boat when you can barely pay your mortgage. You don’t blow a bunch of cash on Vegas when you’re trying to save for college.”

TARKANIAN: “I think the President would have been more on point if he had said: ‘When times are tough for Americans, the government should tighten its belt. You don’t go bailing out banks when Americans can barely pay their mortgages. You don’t go blowing a bunch of cash on socialist experiments when you’re trying to save the free market.”

There are so many different fronts that we in the tea party movement must fight to take our country back.

Frequently, we at the Tea Party Express have focused on the “big picture” if you will: raising money for political campaigns – to support the “good guys” or defeat the “bad guys,” TV and radio ad campaigns on key issues of the day, organizing mass rallies, spearheading petition campaigns and email/letter/phone call/fax campaigns to key Members of Congress, news conferences, press releases to the media, etc…

But there is much more that needs to be done. Thankfully there are some great patriots who are helping to organize a national effort to provide tea party supporters such as yourself a fantastic opportunity to really change the way politics work – and ensure that constitutional conservatives are involved in the decision making process of the major political parties.

If you live in California, both of the following two action items require your attention.

If you live anywhere else in the nation, pay attention just to Action Item #1.

** ACTION ITEM #1 ** (Nationwide): The National Precinct Alliance has been steadily building a network to give tea party supporters and conservative constitutionalists the chance to help take back the major political parties. It involves a grass roots effort at the ground level – to ensure that good people such as yourself can help us take back the political parties by getting involved specifically at the precinct level.

As the National Precinct Alliance explains:

The candidates, democrat and republican, who win public office will almost always be the candidate endorsed by the local PARTY LEADERS. One of those two candidates, either the republican or the democrat, will be elected in November, and go to Congress to make the laws, and determine much of our country’s future. This is very obvious to most Americans. What is not obvious is what is happening at the grassroots level. Every two years there is an election most Americans are not aware of… the election of our Precinct Executives. The Precinct Executives elect the Party Leaders and the Party Leaders endorse the candidates for office. Hence, the only way Americans can fire the current local county Party Leaders is through the Precinct System by electing like-minded Precinct Executives.

So how do you, or someone you know, become a Precinct Executive and help advance this effort? The National Precinct Alliance has all the answers and you can get involved here: http://www.nationalprecinctalliance.org/main/getting_started

** ACTION ITEM #1 ** (California Only): In California an important deadline is coming up – tomorrow, Tuesday, February 16th. The deadline is for applications to the first-ever Citizens Redistricting Committee.

Because of a voter-approved initiative, private citizens such as yourself can apply to serve on the state’s redistricting commission, where the lines are drawn for legislative districts throughout the state.

We are all now well aware of the famous – infamous – examples of district lines being drawn for a congressional or legistlative seat that are ridiculously shaped. They are designed solely to get blocs of voters into one district, to help ensure that the incumbent politicians – in this case now dominated by liberals – can keep their seats and hold on to power.

Full details on how to get involved are here: http://www.wedrawthelines.ca.gov/

GATA – Seeking to crack the Fed’s secrecy around the bank bailout (Hat Tip: Brian B.)

GetLiberty.org – Editorial: States Should Get No More Bailouts

Conservative Review – Secession in the Air

The Radio Patriot – Idiot in Chief

Under – Is This Constitutional? URGENT: Government tells Toyota to fork over documents to probe timeliness of massive recalls

Fox News – Death and Espionage in the Digital World

Newsweek – Can the FBI Secretly Track Your Cell Phone? (Hat Tip: Brian B.)

Greece a Canary in the Deficit Mine

Simon Johnson: Goldman Is About To Be Blacklisted And Possibly Banned In Europe (Hat Tip: Jean Stoner)

A Blizzard of Spending

In Their Own Words: Environmentalists Out to Dismantle Capitalism

Who is Going to Pay for FEMA?

BAYH-BAYH: Congress has not created one job in last six months

China: the world’s next great economic crash; Like Dubai at the beginning of last year, China is now reaching the peak of a bubble.

Forget Greece, The US Almost Had a Failed Treasury Auction

Economic Warnings from an Elderly Third Grader (The Mogambo Guru)

Use of Temps May No Longer Signal Permanent Hiring

For more information about the upcoming documentary film based on TEAM RUBICON, contact DeeDee Slewka of Fifth Man Films at [email protected] 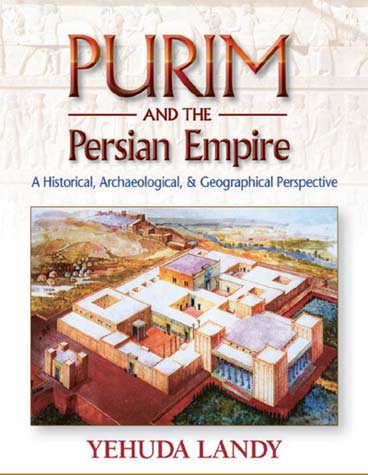 As Jews, we are blessed to enjoy the observance of many holidays; all of which are steeped in rich meaning, symbolism and profound lessons for life. We are taught that the one holiday that will endure forever, even after the coming of Moshiach and the final redemption will be that of Purim. As we immerse ourselves in the joy and gladness of Purim, we are also cognizant of the fact that the timeless and eternal story of Purim, as told in Megillas Esther, is one that genuinely embodies the resilience of the Jewish soul as manifested in total faith and hope in Hashem and the determination to survive against all odds.

In this recently published book, “Purim and the Persian Empire – A Historical, Archaeological & Geographical Perspective” (Feldheim Publishers), Rabbi Yehuda Landy, a noted Torah scholar, lecturer, author and archaeology expert examines the enigmatic qualities of Purim and answers the litany of questions that we have all pondered as he takes us on a trenchant sojourn into the fascinating world of the Persian Empire. Megillas Esther virtually comes to life as we gain a cogent understanding and new insights as we study excerpts of the text that are laden with Talmudic, historical and archaeological scholarship as evidenced in the presentation of ancient artifacts, maps and magnificent photographs.

This book is the culmination of a four-year research project which spanned three continents, as the author explains that his inspiration for this endeavor began on a visit to a special exhibition at the British Museum in London named “Forgotten Empire”, that dealt exclusively with the material culture from the same Persian Empire with which we are familiar from the Book of Esther. While this book is not “meant to resolve any halachic issues”, says the author, “it is meant as a tool for understanding and visualizing the events of the Megillah.” Beginning with a historical backdrop of the Persian Empire in Jewish history, the author informs us that after the conquest of the Babylonian empire by the kings of Persia and Media, life improved dramatically for the Jews as their new Persian rulers permitted them to return to their land and to “rebuild the Beis HaMikdash and the wall around Jerusalem.” While the darkness of the Babylonian exile had ended and Jews lived in relative freedom from oppression, it became clear that their new Persian rulers were not immune to strains of virulent anti-Semitic proclivities as manifested in the city of Shushan prior to the story of Purim.

The narrative is greatly enhanced by the stunning photos of original artifacts from that era which included clothing, cosmetics and furniture as well as the gold and silver tableware and drinking vessels from Achashverosh’s palace. We transform into time travelers as we embark of a guided tour of the cities of Shushan and Jerusalem in all their resplendent glory and are treated to spectacular visuals of the king’s gate, the courtyard of the women’s residence, the king’s treasuries, the inner courtyard and the king’s gardens among many other ancient sites of the empire.

The author delves into the chronology of the Persian empire according to Chazal and provides us with a historical backdrop of the reign of such Persian kings as Daryavesh (Darius the Mede), Coresh, Cambyses and Xerxes, who is also believed to have been the real Achashverosh. “Although his name was pronounced by the Greeks as Xerxes, the Persian pronunciation was Chashiarsh. Chashiarsh, when pronounced in Hebrew, turns into Achasverosh” says Rabbi Landy. A most intriguing and informative chapter on the archaeological evidence of such ancient cultures as Assyria, Babylonia and the Persian cities of Pasargadae, Shushan, Persepolis and Hamadan sheds light on the decadence of the era and the societal influences that held sway amongst the respective populations. “The earliest documented identification of Shushan appears in the diary of Benjamin of Tudela (1165). He also makes mention of the tomb of Daniel wihch is located there”, the author concludes.

Historical and archaeological material are the predicate for our study of Megillas Esther in the second part of the book. Citing numerous sources from mesechta Megillah in the Gemara as well as historical proof, we get a rare glimpse into the inner machinations of the mind of Achashverosh, the faith-based motivations of Queen Esther and Mordechai and the hatching of Haman’s diabolical scheme of annihilation of the Jewish people. Following the miracle of Purim, the author clues us in to what became of Esther and Mordechai. “The Jews of Persia had a tradition that Mordechai and Esther are buried in the city of Hamadan, which was the original capital of Media. The custom to visit their graves before Purim continues until this very day.”

This detailed account of the holiday of Purim will surely be a captivating treat for history buffs and a must read for anyone who wishes to slake their desire for Talmudic and historical knowledge of this juncture in the annals of Jewish history. We are left incredibly inspired; even breathless, as we witness Hashem’s miracles as they unfold before our very eyes and as we forge a personal connection to those who summoned up the kind of faith that has sustained our people since time immemorial.