The DC – Obama paves the way for reconciliation in video address (Hat Tip: Brian B.)

The Radio Patriot – Canadian Granholm implies she can run for President: “I’ve got dual citizenship.”

Gateway Pundit – Mitch McConnell: Not Sure if GOP Can Block Dem’s Attempt to Ram Through Obamacare (Video)

United States of Earth – Is This A Game Or Is It Reality? (Hat Tip: Brian B.)

Times Online – Robots and bees to beat the Taliban’s IEDs

Citigroup Warns Customers It May Refuse To Allow Withdrawals (Hat Tip: Brian B.)

The image of banks locking their doors to keep customers from making withdrawals during a bank run is what immediately came to mind when we heard that Citigroup was telling customers it has the right to prevent any withdrawals from checking accounts for seven days.

“Effective April 1, 2010, we reserve the right to require (7) days advance notice before permitting a withdrawal from all checking accounts. While we do not currently exercise this right and have not exercised it in the past, we are required by law to notify you of this change,” Citigroup said on statements received by customers all over the country.

What’s going on? It seems that this is something of an error. The seven day notice policy only applies to customers in Texas, Ira Stoll reports at The Future of Capitalism. It was accidentally included on customer statements nationwide.

“Whatever the explanation, it doesn’t exactly inspire confidence in Citi,” Stoll writes. “But it’s hard to believe a bank would be sending out a notice like that on its statements.”

Getting Back Lost Jobs Could Take 5-Plus Years

Federal deficit at $430.69 billion through January

What to expect from the commercial real estate crisis

Four more US banks are closed.

“Crisis of Confidence”: Risks of US Defaults are Very Real 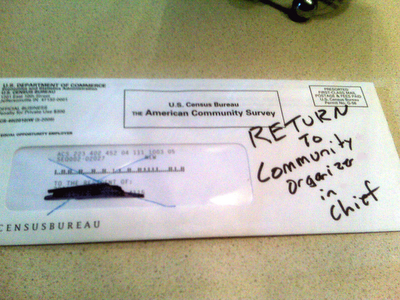 Today I was ordered to participate in the American Community Survey (ACS). Never heard of it? Neither did I, until the edict arrived in the mail from the Community Organizer in Chief, via one of his many bootlicking lackeys, Robert M. Groves, director of the United States Department of Commerce.

I’ll receive the survey in a few days, the edict tells me. The 28-page questoinaire [download a pdf here] is separate from the Census. My response to both (emphasis theirs) documents is “required by U.S. Law.”

That’s an interesting statement, considering that I have been on this earth for nearly 43 years and this is the first time I’ve ever been ordered to complete even the Census.

The survey goes far beyond the 10 basic (but unnerving) questions the Census will posit, which will inquire about such information as who lives under my roof, their names, dates of birth, and race, questions I would be uncomfortable answering for a marketing company let alone our leviathan federal government — the nation’s top employer and most oppressive engine.

No, the getting to know you phase of the questionnaire, the edict tells me, that will “show not only the number of people who live here [in America], but how (again, emphasis theirs) we live as a Nation” goes much, much deeper. Some of the ice-breaker questions, lifted for convenience from Big Government’s Bob Hamer, include everything from the intrusive to the downright inane (any emphasis from here on out is mine):

I’d like to know what the federal government intends to do with such information. You can imagine my skepticism about giving up such private information, when a clearly defeated pResident still plans to use his Congresscriminal henchweasels to shove health care deform down our throats through reconciliation, presumably, because “he hasn’t explained it well enough” to us woeful simpletons.

You can also imagine that I’d want to know why the government needs to ask me how much money I make … when I’ll already be answering that question for the IRS come April 15. They certainly don’t need to know my flushing habits, unless it’s their edicts that I’m flushing. They don’t really need to know “the most important thing I do at work.” After all, I don’t work for the federal government. That’s information to be kept between my employer and I … because I don’t even work for any of the industries the pResident has nationalized.

I think I’ll pass on this order, thank you very much.

Naturally, that decision will not sit well with the federal government:

The American Community Survey is conducted under the authority of Title 13, United States Code, Sections 141 and 193, and response is mandatory. According to Section 221, persons who do not respond shall be fined not more than $100. Title 18 U.S.C. Section 3571 and Section 3559, in effect amends Title 13 U.S.C. Section 221 by changing the fine for anyone over 18 years old who refuses or willfully neglects to complete the questionnaire or answer questions posed by census takers from a fine of not more than $100 to not more than $5,000.

First I’ll be sending the notification letter back marked, as you saw in the image above, “Return to Community Organizer in Chief.” Next, I’ll send the ACS back, and finally the Census, marked the same way. I want to see just how far the federal government is willing to go with this mandate.

I’m their huckleberry — although I don’t think they’ll appreciate climbing my front steps to find me sitting on a bench, holding a loaded AK-47 across my knees, and my subsequent demand that they leave my proprety by their own means … or mine.

I’m pushing back not because I’m not willing to follow the Framers intent for the Census — I’m not looking to deliberately scuttle the attempt to apportion the number of seats in the House of Representatives. I’m standing up because this survey is a direct intrusion into my private life, and it’s none of the federal government’s goddamned business how long my drive is to work or whether I have working plumbing or whether or not I can dress myself.

You should follow the same path. Don’t be intimidated by their false threats, by their corny marketing language about wanting to know “how we live as a nation.” It’s all bullshit; they want to know who is a productive member of their socialist utopia … and who they can leave behind to rot as useless detritus, unworthy for inclusion in the People’s Worker Collective.

Send a message: This pResident needs to learn that he works for you, not the other way around. Tell him he can keep his asinine “community” survey.

Oh, and one more thing: Tell him he can kiss your radical rightwing teabagging mobster racist evil-monger flyover country ass.