Bob McCarty Writes – Can You Live Without Mail Delivery on Saturday?

The Daily Mail – Neglected by ‘lazy’ nurses, man, 22, dying of thirst rang the police to beg for water (Hat Tip: Brian B.)

Gateway Pundit – A Patriotic Call to Arms- Protest Obama in Missouri – 9:45 AM Wednesday in St. Charles

Gateway Pundit – Steven Colbert: Michelle Malkin Is Made From 100% Snakeskin

The Radio Patriot – The Hollywood Blacklist

The Radio Patriot – Did you know that?

The Radio Patriot – Mr. President, We the People…

Back in December, when we were over at Word Press for a while, I came up with the expression “We need more boob belt!” in the parlance of Christopher Walken’s great cowbell skit on Saturday Night Live, and Harold Stickeehands gave the world his famous artwork about Michelle Obama (reposted below).

Yesterday, Fistful of Donuts inspired me to spew this interesting little take on French First Lady Carla Bruni showing up in public without a bra.

Today, Michelle Obama’s Mirror may have just topped us all with the debut of Boob Belt Fever: The Movie. (A little tip: Give it a few seconds to load.)

After seeing the nausea inspiring dress Michelle Obama wore to the Nobel reception for her “baby’s daddy,” I am forced to admit something disturbing. 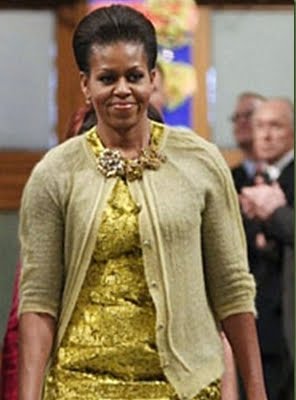 As the great Christopher Walkin would say, I got a fever and the only prescription is more boob belt! 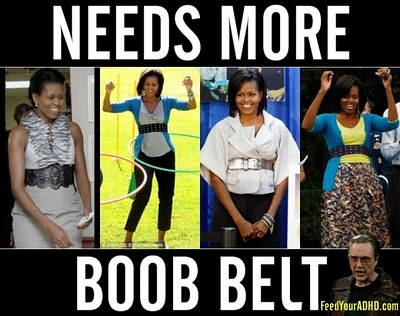 H/T to the brilliant Snarky Basterd aka Dr.D. for giving birth to the Needs More Boob Belt meme with this comment “I can hear Christopher Walken now: We Need More Boob Belt!

Right to Education Coverage of the March 4th protests…

Obama policies projected to add $9.7 trillion to debt by 2020

Is the FDIC Preemtively Cracking Down on Potentially Problematic Loans and Could It Lead to Massive Bank Failures in the Near Term?

Rogoff: U.S. Has Defaulted Before, May Do So Again

‘Buy some gold every month’ as protection against falling currencies, says Marc Faber

Is Moving Out of the US A Way to Escape the Coming Economic Collapse?

Gold and Silver Supply: Get Some While You Can (The Mogambo Guru)

We told you about the segment on Tuesday where MSNBC’s Dylan Ratigan experienced a meltdown. In his attempts to smear the tea party movement, he instead besmirched himself. As one commenter wrote on Michelle Malkin’s website:

This is the first time I have seen or heard of Dylan Ratigan, but he is the reason the saying: “It is better for a man to keep his mouth shut and have people think he’s a fool, than to open it and remove all doubt.” rings true.

And boy, did that video clip go viral. In fact it earned 13 YouTube Honors from around the globe, including the #1 Most Viewed News/Politics video of the day. And it even became the 26th most popular clip on YouTube as a whole! 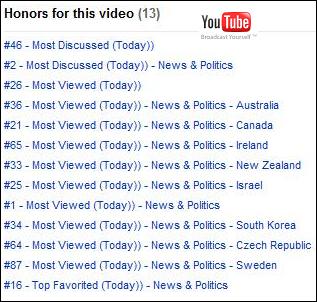 Now the folks at Fox News are having some fun with this at MSNBC’s expense. And we’re very pleased to see that. The more exposure this gets, the better we are able to define the types of unseemly tactics that are being used to try and smear – and by virtue stop – the tea party movement.

You can also view it direct from FoxNews.com – HERE.

Keep doing what you’re doing fellow supporters of the tea party movement. Given the tactics being employed against us, it is clear this movement is making an impact and terrifying those (like MSNBC’s Dylan Ratigan) who oppose our limited-government, less-taxation, greater liberty message!