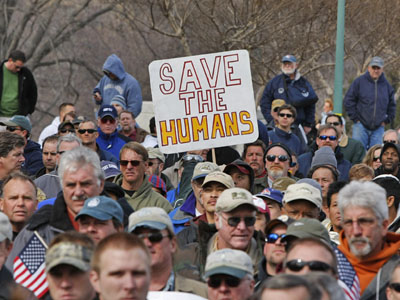 AP/Luis M. Alvarez – One sign at the United We Fish rally at the Capital summed up the feelings of recreational and commercial fishermen.

I simply cannot believe my eyes today. The EPA with the stalwart support of the Obama administration wants to, wait for it, ban all sport fishing in the US. You heard me right – how to thoroughly piss off about 60,000,000 fishermen and women. And here’s a newsflash – many of them are gun owners…

From the American Sportfishing Association:

A sweeping oceans and Great Lakes management policy document proposed by the Obama Administration will have a significant impact on the sportfishing industry, America’s saltwater anglers and the nation’s coastal communities. The draft policy, the Interim Report of the Interagency Ocean Policy Task Force, issued on September 17, will govern federal Pacific and Atlantic Ocean waters and Great Lakes resource conservation and management and will coordinate these efforts among federal, state and local agencies. This past June, President Obama created the Interagency Ocean Policy Task Force, led by the Chair of the Council on Environmental Quality (CEQ), to develop a draft national policy and implementation strategy for conserving and managing the United States ocean territory and the Great Lakes.

The Obama administration will accept no more public input for a federal strategy that could prohibit U.S. citizens from fishing the nation’s oceans, coastal areas, Great Lakes, and even inland waters…

“When the World Wildlife Fund (WWF) and International Fund for Animal Welfare (IFAW) completed their successful campaign to convince the Ontario government to end one of the best scientifically managed big game hunts in North America (spring bear), the results of their agenda had severe economic impacts on small family businesses and the tourism economy of communities across northern and central Ontario,” said Phil Morlock, director of environmental affairs for Shimano.

“Now we see NOAA (National Oceanic and Atmospheric Administration) and the administration planning the future of recreational fishing access in America based on a similar agenda of these same groups and other Big Green anti-use organizations, through an Executive Order by the President. The current U.S. direction with fishing is a direct parallel to what happened in Canada with hunting: The negative economic impacts on hard working American families and small businesses are being ignored.

“In spite of what we hear daily in the press about the President’s concern for jobs and the economy and contrary to what he stated in the June order creating this process, we have seen no evidence from NOAA or the task force that recreational fishing and related jobs are receiving any priority.”

Consequently, unless anglers speak up and convince their Congressional representatives to stop this bureaucratic freight train, it appears that the task force will issue a final report for “marine spatial planning” by late March, with President Barack Obama then issuing an Executive Order to implement its recommendations — whatever they may be.

Led by NOAA’s Jane Lubchenco, the task force has shown no overt dislike of recreational angling, but its indifference to the economic, social and biological value of the sport has been deafening.

Additionally, Lubchenco and others in the administration have close ties to environmental groups who would like nothing better than to ban recreational angling. And evidence suggests that these organizations have been the engine behind the task force since before Obama issued a memo creating it last June.

My Dad was an avid fisherman. Most of my friends fish and I enjoy fishing. I don’t think they will stand for this – not at all…

Do you know how many jobs this will cost us? Fishermen and hunters provide a lot of revenue and most or all of that will be lost too. This is just plain stupid. I’m sure Obama is saying something to the effect of: “It’s for the good of the fish and the land don’t ya know. And by the way, if a few million of you Americans would just drop dead, we wouldn’t have to do this.” Mark my words, this will bring on a revolt if carried through.

My theory is that he is trying to goad America into violence. Just keep poking at and revoking our rights until we snap and there is violence. Then blame martial law on the American people because he was forced into it. Evilly predictable if nothing else…

IRVINE, Calif. USA – October 5, 2009 – A recently published administration document outlines a structure that could result in closures of sport fishing in salt and freshwater areas across America. The White House created an Interagency Oceans Policy Task Force in June and gave them only 90 days to develop a comprehensive federal policy for all U.S. coastal, ocean and Great Lakes waters. Under the guise of ‘protecting’ these areas, the current second phase of the Task Force direction is to develop zoning which may permanently close vast areas of fishing waters nationwide. This is to be completed by December 9, 2009.

Dave Pfeiffer, President of Shimano American Corporation explained, “In spite of extensive submissions from the recreational fishing community to the Task Force in person and in writing, they failed to include any mention of the over one million jobs or the 6o million anglers which may be affected by the new policies coast to coast. Input from the environmental groups who want to put us off the water was adopted into the report verbatim – the key points we submitted as an industry were ignored.”

Recreational fishing generates a $125 billion annual economy in the United States and supports jobs in every state according to government figures. Through the Sport Fish Restoration program, anglers have provided more than $5 billion through excise taxes on fishing tackle to fishery conservation and education for decades.

In addition to the economic aspects, anglers lead the nation in volunteer conservation efforts on behalf of improving fish habitat, water quality and related environmental areas. “There was no mention of the fishery conservation efforts which anglers have led for over 50 years in every state – an environmental success story that has no equal in the world”, said Phil Morlock, Director, Environmental Affairs for Shimano. “The Task Force did not make any distinction between the dramatic differences between harmful commercial fishing harvest methods and recreational fishing, even though we spelled it out for them in detail,” added Morlock.

Claiming to be the result of a public consultation process the report states, “Having considered a broad range of public comments, this report reflects the requests and concerns of all interested parties.”

The original White House memo and not surprisingly the Task Force report contains multiple references to developing a national policy where Great Lakes and coastal regions are managed, “consistent with international law, including customary international law as reflected in the 1982 United Nations Convention on the Law of the Sea” – a 300-page treaty the U.S. has never ratified.

“We question what implications there will be for state authority and jurisdiction in the Great Lakes and coastal regions if the U.S. adopts the U.N. Treaty,” said Pfeiffer.

The report makes it clear that future authority for implementing the policy for coastal and inland waters will fall under White House jurisdiction with a new National Ocean Council comprised of over 20 federal agencies at Cabinet Secretary or Deputy Secretary level. No reference to Congressional jurisdiction is indicated.

“This significant change in U.S. policy direction is the result of a 90-day fire drill process as ordered by the President that, not surprisingly, lacks balance, clarity and quality in the end product,” said Morlock. “People who simply want to take their kids fishing on public waters deserve better from their government,” he added.

Shimano is joining with other members of the recreational fishing industry to urge anglers to contact their members of Congress and the administration to request this process be required to adopt the economic, conservation and social contributions of recreational fishing as key elements of the policy. It is critical that we ensure Congressional oversight and state jurisdiction and management continues.

If the White House was looking for an issue almost as big as the early 1990s gun bans to gin-up opposition in the fall, they’ve certainly found one.

So as Obama’s disastrous economic policies have resulted in millions of Americans losing their jobs, the unemployed won’t even be able to fish to feed their families.

Personally I can tell you this – when we want to go fishing we will and we’ll take our chances. We live in an area with hundreds of lakes and people live a lot on fish up here. Obama can stuff a trout where the sun don’t shine… This is unconstitutional to say the least and it is yet another collectivist grab of the Marxist/Communist kind – the kind that Americans will fight to their last breath.

8 thoughts on “No Fishing Allowed”