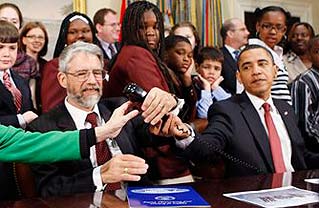 New Zeal has an explosive piece up that is absolutely mind-blowing: Obama File 99 Security Risk? Obama “Science Czar” John Holdren and the Federation of American Scientists

Last time we looked at Holdren, we covered his Soviet ties, his relationship with the Bulletin of Atomic Scientists and his contacts that were Communists, Socialists, radicals and spies. I know it sounds like a Hollywood thriller, but unfortunately it’s not – it’s based on facts and evil just as the rest of Holdren’s story is.

Holdren still sits on the Sponsor’s Board for the Federation of American Scientists. From New Zeal:

Like the Bulletin of Atomic Scientists, the F.A.S. was founded immediately after WW2, by left-leaning scientists, many of whom had worked in the Manhattan Project to create the U.S. atomic bomb.

After the defeat of the Axis Powers, these scientist feared that the U.S. would use their creation against their beloved Soviet Union.

Therefore some of them worked to ensure that the Soviet Union was given every chance to develop better nuclear weapons, while American efforts were countered at every opportunity.

Both the Bulletin and the F.A.S seemed to have followed this agenda.

A number of the founders/sponsors for the F.A.S. have interesting histories involving Communism, Socialism and active spying for the Soviets. If you can judge a person by the company they keep, it would seem that Holdren sought out the company of Communists, Socialists, radicals and spies and didn’t give a crap who knew or figured no one would care. History is a bitch John – especially when someone like Trevor at New Zeal starts digging around in your past and shedding the light of day on your past and present black deeds.

In October 1950, Senator Joseph McCarthy placed a statement in the Congressional Record charging that the Federation of American Scientists was “heavily infiltrated with communist fellow travelers.”

In the 1970’s F.A.S. described itself as the “voice of science on Capitol Hill”.

By the 1980s the F.A.S. was working to oppose president Reagan’s proposed space based missile defense system.

For the record, “Star Wars” scared the crap out of the Soviets which I deem as a very heartwarming development and a survival tactic that worked to keep America safe. No wonder most Americans miss Reagan so much…

Not only is F.A.S.’s history full of Communist ties, they still have ties in the Communist arena today. Read New Zeal’s post – he goes into detail on the history of the organization and the players that were involved then and now. Then ponder this:

John Holdren held high office in two organizations shot through with socialists, Soviet sympathizers and “security risks”. Both organizations have worked with Soviet officials for policies arguably beneficial to the former Soviet Union and detrimental to the U.S.

Holdren personally collaborated with a key figure in the Soviet/Russian scientific/political apparatus and traveled to the Soviet Union at the height of the “Cold War”.

Now John Holdren holds the most important scientific post in the Western World and has the ear of the President of the United States of America.

Should a man with this background riddled with Communist associates, Soviet informants and in general ‘bad guys’ be ensconced in the White House? He should be vetted and removed from our government due to his dealings past and present with known individuals who share an ideology that wants to take down our country and transform it into a Communist haven ruled by elitists. He is not fit to serve. It’s time to remove radicals such as Holdren from positions of power and relegate them to the dust bin of history where they are impotent and are no longer a serious threat to our freedom. Holdren is a national security risk and should be treated as such.