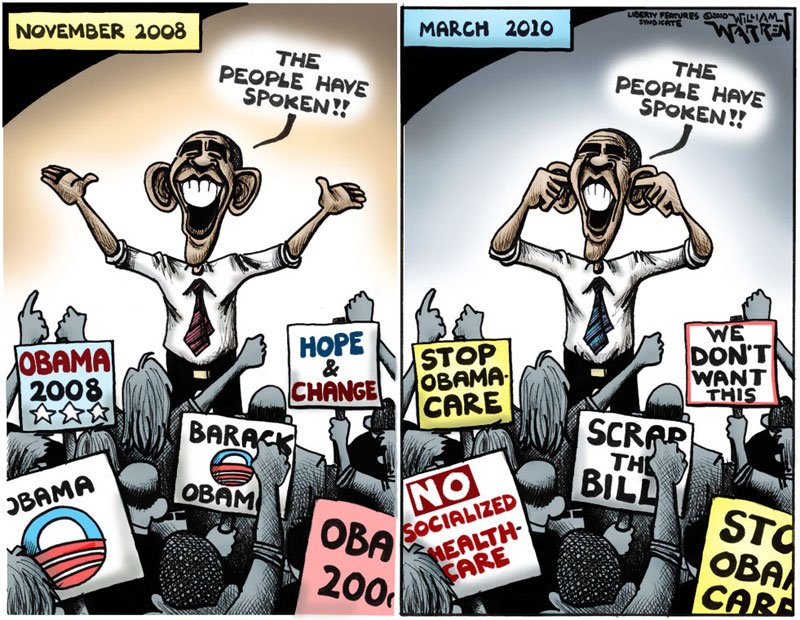 From: Chris Muir and Day by Day Cartoon

You must defend the process. This is not on par with reconciliation, which at least still requires a voting body to vote. This is on a level all its own. The implementation of any ‘Slaughter Solution’ is the circumventing of the Constitution and the legislating of tyranny. Open debate and demonstrated majority consent are no longer necessary.

NRO – ‘The Rules Committee Can Do Just About Anything’ (Hat Tip: Kim Priestap)

Brutally Honest – “there is tyranny afoot and it must be confronted”

Dr. Melissa Clouthier – Louise Slaughter: Slaughtering The Will Of The People

The Washington Examiner – House Democrats looking at ‘Slaughter Solution’ to pass Obamacare without a vote on Senate bill UPDATED!

UPDATE: Kim Priestap at Wizbang – Get Ready. The Democrats are Going to Slaughter Democracy Next Week

War has just been declared on the Constitution if healthcare goes through without a vote. Will you stand? Will you fight?

If anyone wants to attend, Obama will be in Ohio Monday – near Cleveland. (Hat Tip: Jean Stoner)

the 912 site with more info is here

Our country is on fire. Our country is an inferno. We don’t have time to talk about “tickle fights”. Man, how do people sleep at night?

Tonight we’re taking a look at a full fledged attempt at taking over control of our government. The Federal government owns almost 30% of land area of United States. Overwhelmingly in the West: Nevada almost 90% — Alaska almost 3/4 federally owned. Texas is only 2% federally owned, and do you know why? Because (making sound of gun cocking) “get off my land”.

What would happened if we tapped these areas for our natural resources? Who are we saving this for? Our children? Grandchildren? We could be closer to paying off our national debt. This is Fort Knox! Why aren’t we drilling there?

We are going to go down in world history as a suicidal nation. When we lose everything — when our country goes under, you don’t think the Russians aren’t going to climb over the North Pole to claim what they already say is theirs? This is a suicide mission we’re on.

A memo that was leaked by someone in the Obama administration that it is pursuing 13 million acres in Midwest, all in the name of national monuments. National monuments? How many more do we need? They’re not telling anybody about it — its by executive order.

A new report reveals there is a move to appease enviro groups, again by Executive Order, to prohibit US citizens from fishing in our oceans, lakes, inland waters. Really? Apparently enviros want to protect the fish. What about humans?

The president can’t achieve what he wants thru the proper channels – or bribery — so he’ll go thru the back door without Congress… all he needs is his pen. Through executive powers, without consulting the American people.

They’re not going to give up their power willingly — not without a fight. We’re going to have to take their power away from them.

Today, a listener sent this:

The following “Executive Orders”, now recorded in the Federal Register, and therefore accepted by Congress as the law of the land, can be put into effect at any time an emergency is declared:

10995–All communications media seized by the Federal Government.

10997–Seizure of all electrical power, fuels, including gasoline and minerals.

10998–Seizure of all food resources, farms and farm equipment.

10999–Seizure of all kinds of transportation, including your personal car, control of all highways & seaports.

11000–Seizure of all civilians for work under Federal supervision.

11001–Federal takeover of all health, education and welfare.

11002–Postmaster General empowered to register every man, woman and child in the U.S.A.

11003–Seizure of all aircraft and airports by the Federal Government.

11004–Housing and Finance authority may shift population from one locality to another. Complete integration.

11051–The Director of the Office of Emergency Planning authorized to put Executive Orders into effect in “times of increased international tension or financial crisis”. He is also to perform such additional functions as the President may direct.

These executive orders grossly and flagrantly violate Article 4 Section 4 of the Constitution of the United States.

The United States shall guarantee to every state in the union a republican form of government, and shall protect each of them against invasion; and on application of the legislature or of the executive (when the legislature cannot be convened) against domestic violence.

When Government gets out of hand and can no longer be controlled by the people, short of violent overthrow as in 1776, there are two sources of power which are used by the dictatorial government to keep the people in line: the Police Power and the Power of the Purse (through which the necessities of life can be withheld).

E. O. 11490 is a compilation of some 23 previous Executive Orders, signed by Nixon on Oct. 28, 1969, and outlining emergency functions which are to be performed by some 28 Executive Departments and Agencies whenever the President of the United States declares a national emergency (as in defiance of an impeachment edict, for example). Under the terms of E. O. 11490, the President can declare that a national emergency exists and the Executive Branch can:

All of these and many more items are listed in 32 pages incorporating nearly 200,000 words, providing and absolute bureaucratic dictatorship whenever the President gives the word.

Executive Order 11647 provides the regional and local mechanisms and manpower for carrying out the provisions of E. O. 11490. Signed by Richard Nixon on Feb. 10, 1972, this Order sets up Ten Federal Regional Councils to govern Ten Federal Regions made up of the fifty still existing States of the Union.

Supplementing these Ten Regions, each of the States is, or is to be, divided into subregions, so that Federal Executive control is provided over every community. Then, controlling the budgeting and the programming at every level is that politico-economic system known as PPBS.

The President need not wait for some emergency such as an impeachment ouster. He can declare a National Emergency at any time, and freeze everything, just as he has already frozen wages and prices. And the Congress, and the States, are powerless to prevent such an Executive Dictatorship, unless Congress moves to revoke these extraordinary powers before the Chief Executive moves to invoke them.
These executive orders grossly and flagrantly violate the intent and purpose of Article 4 Section 3. There is NO provision in this section for forming a regional state our of a group of states. Further, these executive orders grossly and flagrantly violate the 9th and 10th amendments to the Constitution.

By Proclaiming and Putting Into Effect Executive Order No. 11490, the President would put the United States under TOTAL MARTIAL LAW AND MILITARY DICTATORSHIP!
And the Guns Of The American People Would Be Forcibly Taken.

Fox News – I Was Am-Bushed On MSNBC Over Iraq

CNS News – Clinton: USA to Start Reporting Criticism Of Its Own Human Rights Record — to UN

Google – Chavez thanks Penn for slamming his critics

The Washington Post – Dem Pollsters : If Dems ignore polls, midterms will be costly

Andrea Shea King – So much for freedom of the Internet

Fox News – First Round to Conservatives

Fox News – Teacher Mauled to Death by Wolves in Alaska

The Radio Patriot – The SEIU Swings at Beck

The New Editor – Democratic candidates distance themselves from healthcare reform

Michelle Malkin – A wrench in Dems’ Wreckonciliation plans, but…

Gateway Pundit – Stunner. Al-Qaeda Killer Who Shot His Way Out of Hospital Is Former Dem Operative

The Strata-Sphere – The End Of Intrusive, Partisan, BigGov

Brutally Honest – “My colon is not my friend”

Bookworm Room – I am still laughing, and may not stop for a while (Heh… )

A handful of taxpayers in a small community north of Wickenburg, Arizona are being targeted by the local school district in a lawsuit that asks a judge to declare they have no right to request public records, sue the district, or complain to outside agencies.

The Congress Elementary School District claims that past efforts by these residents to obtain documents such as minutes of board meetings and spending reports amount to harassment that should not have to be tolerated.

Dodd to offer own version of bank regulation bill

Morning Bell: Obamacare at Any Cost

The Constitution: Another Victim of Obamacare

Obama Admin on Welfare: “Who’s to Say What is Enough?”

The Real Debt Washington Doesn’t Want You to Know About

SARKOZY SCOLDS USA: ‘NOT THE RIGHT WAY TO BEHAVE’

Central banker says USA should not blame others

Is The Federal Reserve Insolvent?

Are Unemployment Benefits No Longer Temporary?

Jobs Outlook May Be Too Optimistic

Peak Oil Demand Is Coming, But Here’s Why It’s Not Good News

Commercial Real Estate Owners Beginning To Walk Away From Properties

Job Openings Up Sharply in January to 2.7 Million

Failed Banks May Get Pension-Fund Backing as FDIC Seeks Cash

Karl Denninger: All You Need to Know About Bank Balance-Sheet Fraud

You must defend the process. This is not on par with reconciliation, which at least still requires a voting body to vote. This is on a level all its own. The implementation of any ‘Slaughter Solution’ is the circumventing of the Constitution and the legislating of tyranny. Open debate and demonstrated majority consent are no longer necessary.

NRO – ‘The Rules Committee Can Do Just About Anything’ (Hat Tip: Kim Priestap)

Brutally Honest – “there is tyranny afoot and it must be confronted”

Dr. Melissa Clouthier – Louise Slaughter: Slaughtering The Will Of The People

The Washington Examiner – House Democrats looking at ‘Slaughter Solution’ to pass Obamacare without a vote on Senate bill UPDATED!

UPDATE: Kim Priestap at Wizbang – Get Ready. The Democrats are Going to Slaughter Democracy Next Week

War has just been declared on the Constitution if healthcare goes through without a vote. Will you stand? Will you fight?