Pierre Legrand’s Pink Flamingo Bar – American Ingenuity And American Grit Is Not Dead…Read The Proof, Then Pick Up Your Sorry Self and Fight Back Against The Socialists!

The Anchoress – Lenten Retreat Day 6 AM

The Washington Times – EDITORIAL: No Obamacare for Obama (Hat Tip: Brian B.)

The Daily Mail – Three pence in every £1 spent in NHS ‘is wasted, costing us billions’ (Hat Tip: Bookworm Room)

The Radio Patriot – More to come…

Breitbart – Census: 16 percent of US filled out surveys so far

Telegraph – Gen. McChrystal: Afghans can use Sharia law for ‘timely and fair justice’

Gateway Pundit – Thanks Barack, Thanks Eric Holder… Another Gitmo Detainee Returns to the Fold

Gateway Pundit – Rep. McCotter: “So This is What Change Looks Like?… Obama’s Hope & Change Has Degenerated Into Tax & Hate” (Video)

Gateway Pundit – Thanks Barack… Most Americans Believe The Economy Could Collapse

Let me remind you this has been going on for years. We are bringing it to a halt. The harsh fact of the matter is when you’re going to pass legislation that will cover 300 American people in different ways it takes a long time to do the necessary administrative steps that have to be taken to put the legislation together to control the people.

Costs of this debacle will be high

Paul Krugman Correction of the Day

Sales of New Homes Drop to Lowest on Record

Portugal Downgraded to AA- by FITCH on Concern Over Mounting Debt

Greece Will Default ‘at Some Point’

Bloomberg Projects Worst NYC Job Cuts In Decades; As Many As 19,000 Could Face Ax

Japan Joins China in Reducing Holdings of US Treasury Debt

Posted in full from The Radio Patriot… 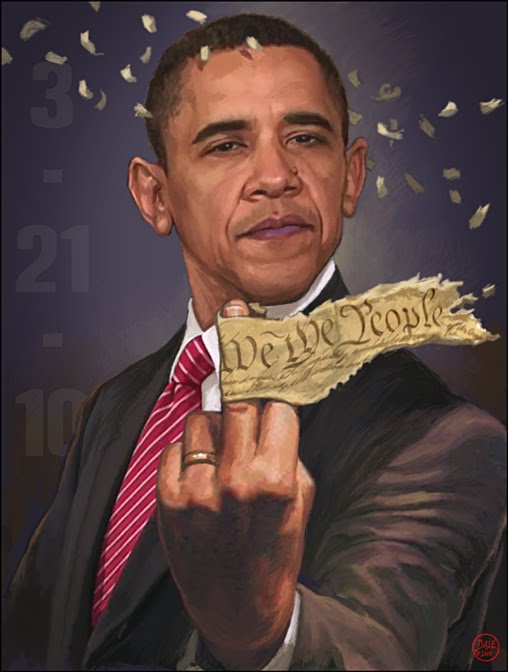 Image Of The Century

THIS IS the image of the century to go along with the ‘change’ that everyone supposedly voted for. I am assuming that this image sums up how most Americans feel right about now when it comes to the disrespect the dictator-in-chief and his motley crew in Congress have shown us and our Constitution.

I do believe this particular image should go viral as it will be THE REMINDER come the mid-term elections and beyond.

It should shine from sea to sea.

Thomas Sowell warns we are approaching the point of no return:

The ruthless and corrupt way this bill was forced through Congress on a party-line vote, and in defiance of public opinion, provides a roadmap for how other “historic” changes can be imposed by Obama, Pelosi, and Reid. What will it matter if Obama’s current approval rating is below 50 percent among the current voting public, if he can ram through new legislation to create millions of new voters by granting citizenship to illegal immigrants? That could be enough to make him a two-term president, in which case he could appoint enough Supreme Court justices to rubber-stamp further extensions of his power.

When all these newly minted citizens are rounded up on election night by ethnic-organization activists and labor-union supporters of the administration, that may be enough to salvage the Democrats’ control of Congress as well.

The last opportunity that current American citizens may have to determine who will control Congress may well be the election in November of this year. Off-year elections don’t usually bring out as many voters as presidential election years. But the 2010 election may be the last chance to halt the dismantling of America. It can be the point of no return.

From the brilliant mind of Kim Priestap… 🙂

One More Favor for Me to Ask Of You…

As I wrote to you previously, I am responsible for our online outreach and social networking. These mediums have proven to be a very successful tool for the tea party movement as a whole, and we here at the Tea Party Express in particular.

Let me be blunt, please, and I hope I don’t come across as too pushy or harsh. But there are some realities we all have to face.

In just 3 days we kick off the “Tea Party Express III: Just Vote Them Out” tour with what will be the historic – and massive – “Showdown in Searchlight” tea party rally in Harry Reid’s hometown of Searchlight, NV.

This will be the first major national tea party event since Congress thwarted the will of the people and rammed through their government-run health care monstrosity. So we have to make this a huge success. We have to show the determination and resolve of “We The People.”

Success is our only option, and I know that our resolve to take our country back is now stronger-than-ever. If the politicians and media thought we were going to go away, boy were they mistaken. We just got betrayed once more, and we’re more determined than ever to boot every Member of Congress who has been a vote in support of this continued ‘slide towards Socialism.’

This movement began, as you will recall, with the earliest pre-Rick Santelli tea parties hosted by Ron Paul supporters and Libertarians who were mad that the Republicans in Washington had sold out their principles. By the time of the bailouts and the “throwing Free Market principles out the window” comments were made by some leading Republicans, that coalition had grown to include many conservative Republicans and Independents. We’re all a diverse bunch, and we don’t always agree at every step of the way. But in the areas where we do agree, our united efforts can be powerful!

We fought for policy changes to restore Constitutional principles to Washington.

We battled against Cap&Trade. We protested the continuing bailouts. We decried the government-takeover of sectors of our economy. And we organized one of the most extensive grass roots pushbacks against legislation in American history.

With a Democrat in the White House and Democrats controlling the House & Senate they were unable to pass through this legislation time-and-time again for nearly one-year, because of the pressure and heat from the tea party movement.

It was only this week that the last few sellouts relented to the pressures of the liberal establishment over the will of the people, and yes as a result, we lost a major battle on a vitally important issue.

So now we must work to defeat these politicians, who have betrayed or failed us, one-by-one. That’s what this Tea Party Express III: Just Vote Them Out tour is all about. It’s funny and a bit ironic for me to look back on our history in this movement. When the Tea Party Express effort first launched last year, the biggest criticism we got from some people was that we were “too political” and wanting to get involved in elections, instead of involved in the policy debates on Capitol Hill. We felt both fronts were important, and brushed off the criticism.

Well now everyone seems to agree that we have more than enough evidence, and track records and voting records of those in Congress to know who to hand a pink slip to. Having further dialogue with these majorities that are passing bailouts, the stimulus, record deficit spending bills, supporting government takeover of the economy, etc… is futile. They’ve heard our protests, read our letters and emails, and thrown away our FAXes. Because they’ve decided that their agenda is more important than our views, in spite of their roles as public servants.

They have thus failed in their duties in this profession that we, the voters, serve as employer and supervisor. And now we’re going to fire these failed politicians.

So with all that said – here is my request to each of you. Please help me. Help me do my job to make sure that in these final 3 days we get the word out about “Tea Party Express III” – and the 42 tea party rallies across the country accompanied by the launching of campaigns to defeat the worst offenders such as Harry Reid and Bart Stupak.

And help me ensure that this “Showdown in Searchlight” is so big, and so powerful of a statement, that it propels even further success for us and our local organizers and supporting partners at each leg of the tour as it crosses the country.

1. The first event is obviously the “Showdown in Searchlight” (and the carpool from Laughlin to Searchlight before the event, and from Searchlight to Henderson after the event). So we need to get the word out in these FINAL 3 DAYS. Please make sure you’ve RSVP’d to the Searchlight, NV rally page on Facebook if you don’t mind: http://www.facebook.com/event.php?eid=306762704480

And then after you’ve RSVP’d please go to the upper-right hand portion of the event page. Under the Tea Party Express page is a link that says “Invite People to Come.” Please invite all your friends on Facebook who support the tea party movement to come to this event. The more people we spread the word to, the bigger the turnout will be. If everyone pitches in, then your friends will likely help spread the word to their own network of friends, etc… all across this country. We could have a huge impact on the crowd size for that day.

Thus my second request is rather obvious. Would you please do the same drill above for the Searchlight event, to anyone you can for the national “Tea Party Express III” tour? That event page to link to, to RSVP to, and to Invite Others to Come, is: http://www.facebook.com/event.php?eid=230814665785

Thank you all for reading my plea for help. And thank you for caring enough to be involved in trying to make a difference. That what makes a movement like this so successful. The passions of the people in this movement are authentic. Nancy Pelosi, the liberal news media and others initially tried to dismiss the tea party movement by suggesting it was manufactured.

They tried to make the culprit Rush Limbaugh. Or the GOP. Or Glenn Beck. And on, and on… they called us “Astroturf.”

Well, we’re still here, in larger numbers than ever before, and we’re going to vote you out of office to convince you once and for all how authentic, and large in size and popular support, this tea party movement really is! 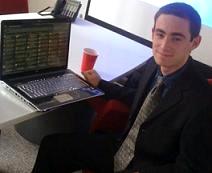 P.S. As of today you can still get on a charter bus heading to Searchlight because more groups are still finding buses available at the last minute, and our team is working to match up requests for a bus seat (from people like you) with local organizers who still have room on a bus. To get a seat on one of the buses heading to Searchlight, send your name, city & state in an email: [email protected]