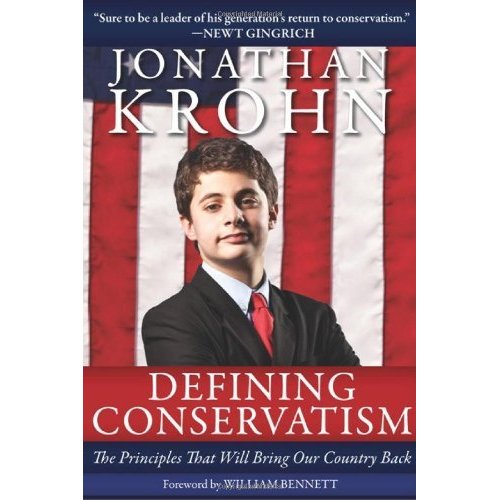 The Principles That Will Bring Our Country Back

If anyone was under the erroneous impression that the only segments of the US population that comprise the ranks of the Tea Party activists and the Conservative movement are upscale baby boomers, middle-aged Glenn Beck aficionados or white haired Republicans from affluent suburbs in the Midwest, then we must think again. In his meticulously researched thesis-like exegesis on the rise of Marxist style government expansionism and it’s egregious consequences for the future of freedom in America, 14 year-old Jonathan Krohn steps up to the plate and sounds a clarion call to yet a new generation of American Conservatives.

“Defining Conservatism” (Vanguard Press – 2010) is Mr. Krohn’s first book and may very well serve as the gold standard in textbook primers for those wishing to learn about the genesis of our constitutional freedoms, the deleterious ramifications to our liberty that judicial activism represents and how our collective “moral compass” must be preserved at all costs. Mr. Krohn deftly conveys his hypothesis from the perspective of a seasoned logician; promulgating an empirical, highly reasoned and profoundly rational approach to the reality of Conservatism. Unlike other books of this genre, this child prodigy steers clear of psychological manipulation, emotional appeals and ad hominem attacks against those he disagrees with. Rather, he engages in positive didactics, offering a cut and dry examination of natural law, individual rights, state sovereignty, rule of law, personal responsibility, morality, the purpose and value of life, judicial philosophy and activism and limited government as defined from the perch of a strict constructionist.

Citing a plethora of sources including the writings of Aristotle and Plato and more modern political theorists as Thomas Jefferson, John Locke, C.S. Lewis Karl Marx and Friedrich Engels, Mr. Krohn makes persuasive arguments for prudent constitutional interpretations as he spotlights the stark contrasts between individualism and victimization, the role of the public and private sectors in creating wealth, and the nefarious agenda of universalist government expansionism. Citing several major US Supreme Court cases including the 1973 Roe v Wade decision, Mr. Krohn illustrates the intrusion of the federal government into the sacred domain of the principles of federalism and states rights. Calling Roe v Wade, “very shoddy jurisprudence” and informing us of “serious constitutional flaws in the Supreme Court’s argument,” Mr. Krohn concludes that “the reasoning used to prove the sacred and inherent nature of life must be applied to the debate within the states, and the constitutional argument for natural rights must apply legally in the states just as much as it is applied to the whole of society.”

He also takes on social theory and the victim mentality when he points to such Supreme Court cases as Boy Scouts of America v. Dale, when James Dale, a homosexual advocate for “gay rights” challenged the legality of the Boy Scouts’ decision to remove him from his position as an assistant scoutmaster. The Court upheld a lower court ruling defending the decision of the Boy Scouts, Says Mr. Krohn: “The victim mentality’s use of the due-process clause as a means to embrace a left-wing agenda is a misuse of it” adding that, “the victim does not come for justice, however, but for vengeance against the unaccommodating, the inconvenient, and anyone who stands in his or her own way.”

A staunch defender of capitalism and the inherent rights of the individual as the creator of wealth, Mr. Krohn believes that a harmonious relationship between the public and private sectors must be established, but also points out that the concept of free trade which distinctly defines capitalism must also be free of dictation by the public sector. He stands in fierce opposition to government “bail-outs” and takeovers of the banking and automotive industries in the fear it will lead to state economic collectivism; based on “the Marxist theory of economics, a stated theory that because government must expand for the “good” of the changing society, so must the economy,” he says.

Mr. Krohn’s book could not have been released at a more propitious time. Concerning his views on the polarizing universal health care reform bill, which many consider to be the most irresponsible piece of domestic legislation in the history of the United States, Mr. Krohn intones, “instead of admitting that universal health care is government’s theft of the private sector’s health care industry, the romanticist brands it as free health care for the uninsured” adding that “the expansionist government appears to be a charity instead of a greedy power grabber in the eyes of the citizenry.” He also probes the commerce clause of the Constitution and while not specifically stating as such, one can readily conclude that the basis of the new health care reform bill is in direct violation of this constitutional protection.

It is not clear whether Mr. Krohn will pursue a career as a constitutional expert or a conservative political theorist and/or pundit, but it is clear that this exceptionally intelligent young man will be a force to be reckoned with as he navigates the multi-faceted trajectories of the universe of American Conservatism. His love for his country serves as his impetus as he states, “I believe that America is truly great. It is the American enshrinement of freedom as a right that has made nations abroad draw themselves into the loving arms of republican government.”