Via Instapundit, Jim Hoft at Gateway Pundit alerts us to the latest machinations by the Leftstream media.

Another GOP office in Ohio was attacked two nights ago. A note was tied to the brick that was thrown through the window that said, “Stop the Right Wing.” A democratic donor was arrested for threatening to kill GOP House Whip Eric Cantor and his family earlier in the week. A brick was hurled through a GOP office in Michigan last weekend. Harry Reid supporters attacked the Tea Party Express Bus and threatened Andrew Breitbart last Saturday. And, a democratic leader compared conservatives to the KKK in a radio interview this week.

Also, far left Rep. Emanuel Cleaver backed down from his original statement that he was spit on by tea party protesters during a protest on Capitol Hill. And, it is clear now that the Black Caucus members and state-run media completely fabricated their story that the members of Congress were called the n-word by the tea party protesters. No one was able to collect the $100,000 reward for proof because there was no proof. It was a set up.

So, with all of this evidence what is the state-run media to do? …Compare the tea party protesters to the left-wing Weathermen terrorists, of course. 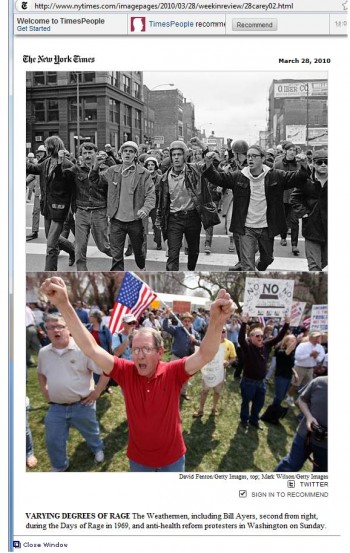 These leftists in the democratic-media complex will not stop bashing the tea party movement no matter what the truth is.

American Power has more on the hit piece that goes with the protest photos.

Maybe the Vatican was right. Maybe the Old Gray Lady is possessed.