More news and updates on the Tea Party front:

And now on to The Radio Patriot:

Pics from this morning’s rally in Evansville Indiana. We’re on the road now, heading to our 2nd of three rallies today — this next one is at Frontier Park in St. Charles Missouri at 4pm CT. The last one today will be at the Illinois Fairgrounds in Springfield at 6 pm CT. 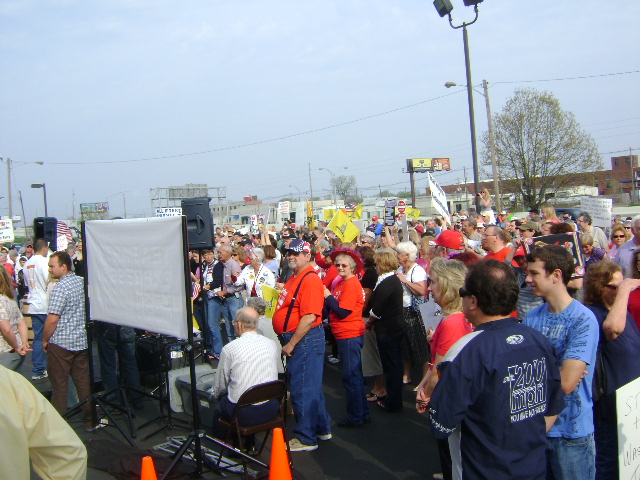 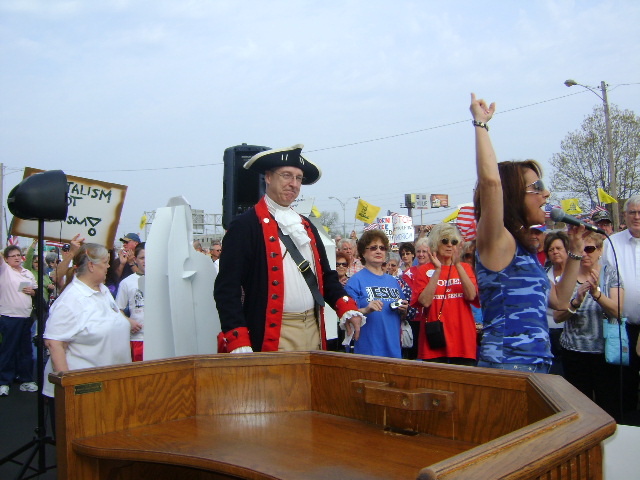 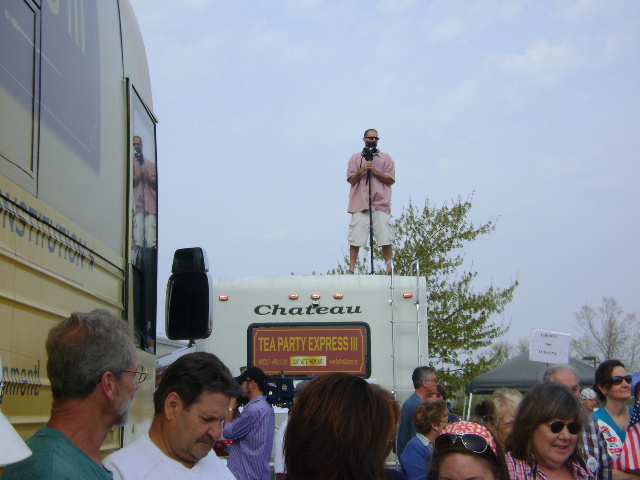 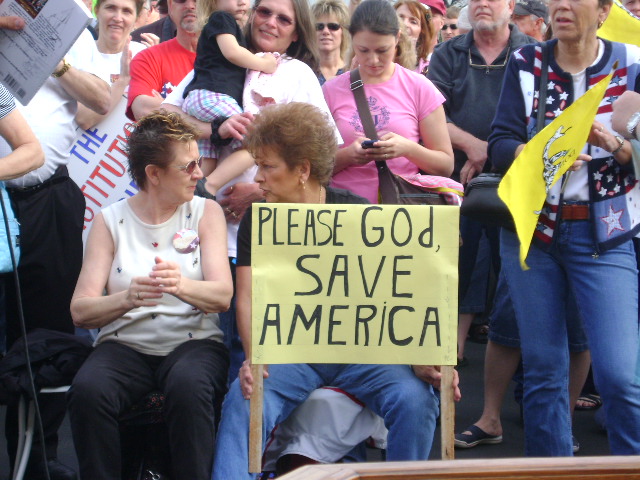 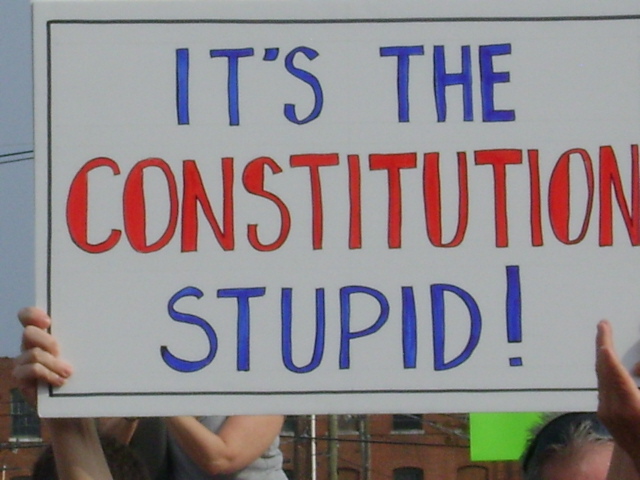 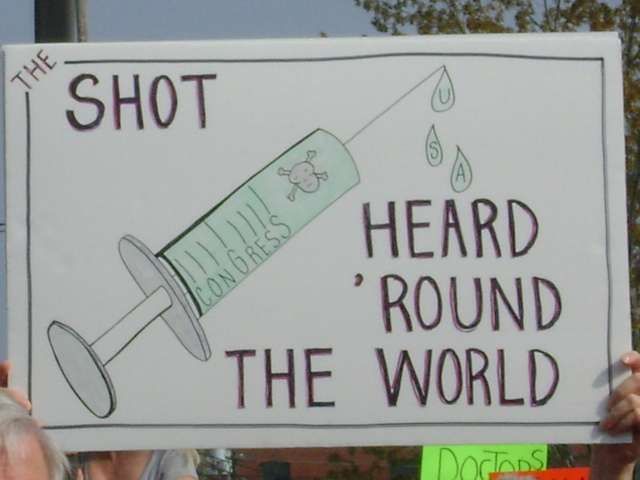 The Tea Party Express (website: www.TeaPartyExpress.org) has announced that it is expanding its plans to ensure the Defeat of Congressman Bart Stupak in Michigan Congressional District 1.

As the Tea Party Express traverses through the Upper & Lower Peninsula of Michigan, it will stop for 5 Tea Party Express rallies. This is far and above more rallies than have been held in any other congressional district in America since the inception of the tea party movement.

Rallies will be held in the following cities in Stupak’s district:

The rallies are just the tip of the iceberg. A “Defeat Bart Stupak” TV and radio ad campaign will be launched during the swing through Stupak’s congressional district.

More and more details will be posted online at: http://www.TeaPartyExpress.org

This will be a historic chapter in the tea party movement and it will take place in Michigan – a state where failed leadership by tax-and-spend politicians has played a major role in crippling the state’s economy.

The Tea Party Express took a lot of sarcastic flak from Senate Majority Harry Reid when it organized the “Showdown in Searchlight” on March 27th.

Today, media outlets are reporting that Reid’s bus tour that launched from Searchlight attracted only dozens, perhaps 100 or so at tops, for his kickoff rally.

Next, we will show the power of this movement in mobilizing supporters to turn out to call for the defeat of Congressman Bart Stupak (D-Michigan) who sold out his constituents and delivered a bloc of votes for passage of the Obama-Pelosi-Reid health care disaster.

Tea Party Express III: Just Vote Them Out national tour kicked off this past weekend in Searchlight, NV where one of the largest political gatherings in Nevada history took place. The Tea Party Express will hold 45 tea party rallies across the nation, featuring conservative speakers, singers, and entertainers. The caravan’s final stop is in Washington, D.C. for the Tax Day Tea Party on April 15th.

Moonbattery – Signs of the Times

Flopping Aces – President Obama Taking the Christ Out of Easter?

NewsMax – Limbaugh Hits Back at Obama for Criticism

Bookworm Room – The attack on the church continues apace; or, so that’s why he became a priest! *UPDATED*

The Hill – Survey: Four in 10 Tea Party members are Democrats or independents (Hat Tip: Brian B.)

11Alive – Who’s Behind the Anti-Obama Billboards? (Hat Tip: Brian B.)

The Radio Patriot – What ThirdWaveDave says…

Gateway Pundit – Michael Steele: Harsh Criticism Is Based on Race

Gateway Pundit – WaPo’s Easter Greeting to Catholics: Your Church Is a “Rotten Edifice”

END_OF_DOCUMENT_TOKEN_TO_BE_REPLACED

Toyota hit with $16M fine over recalls in US (Hat Tip: Nancy Jacques)

How Does U.S. Defense Spending Compare with Other Countries?

Of Myths, Opinions, Taxes, and Guacamole

Deflation on the prowl as Bernanke shuts down his printing press (Hat Tip: Jean Stoner)

The Genesis Of The Gold-Tungsten: The Rest Of The Story (Hat Tip: Jean Stoner)

Marc Faber and Mish Shedlock on Inflation, Deflation, Doom and the End of Civilization.

Water bills go up in down economy as usage drops.

Speeding “Cushion” May Dwindle Due to Recession

We are keeping tabs on the Tea Party Express III tour here and our friends Andrea Shea King (who is on the tour) and Dave Logan (producer extraordinaire) are keeping us in the loop. Below you will see Dave’s latest posting and read the latest news. We are watching and partaking in history here and it is the fight of our lifetime. We must keep fighting to win back our freedoms and wrest our country’s future back from those who seek to control our lives, our fortunes and our very existence.

Others posting on the tour:

Bookworm Room – Did you know that the Tea Party Express is rolling?

Right Wing News – Did you know that the Tea Party Express is rolling?

*** A special thanks to Jean Stoner and Nancy Jacques who have been spreading the word. They are true angels and patriots…

I would also like to thank Glenn Reynolds at Instapundit. He is truly the godfather of blogging and a leader among patriots.

If you are posting on the Tea Party Express III tour, send us your link and we will post it: [email protected]

The majority of Americans want us to go back to the original meaning of the Constitution and the vision our founding fathers had for our great country. We want smaller government, fewer taxes and to have our voices be heard and heeded. Stand with us – fight with us. We need each and every one of you and whatever you can do – even if it is just talking to your family or your neighbor. Don’t let the America dream of freedom fade into the Progressive night. Don’t let our candle of freedom sputter out in the winds of tyranny. Here’s Dave’s post and as a sidenote, Dave Logan is truly one of my heroes and has worked endlessly to help the cause:

*ANDREA SHEA KING — The Radio Patriot — files this report from DAY 9’s Huntsville, Alabama TPX III rally. Huntsville is not only a huge military town, but a NASA town as well. And the Huntsville rally included a personal aspect for Andrea as well. Wonderful photos and commentary.

*Day 9’s second rally was Nashville, Tennesee, and what a rally it was. Andrea has a full round up with another great batch of photos.

*Below, as The Blue Bus travels from Huntsville to the Nashville rally, Andrea captures this scene from the front seat of the bus as it cruises down the highway. As you can see, they’re staying abreast of what’s being reported on the internet — INSTAPUNDIT.COM! It will be a grueling day for the crew, so do your best to support them by attending a rally. If you can’t be there, attend a rally via your computer at Tea Party Express TV. Call or email your family and friends and tell them about the upcoming rallies too.

Remember, the enemy never sleeps, and we can’t afford to take a day off either. CONTRIBUTIONS to TPX III can be made and are most appreciated.

SUPPORT ON THE INTERNET is growing, and as a new week begins we expect it to get even bigger, better and more influential. Taking control of the narrative is our goal. This week we will do just that, especially as we make our way to the north central states and beyond. Stupak country!

MANY THANKS to some of the bloggers entering the battlefield with us, pushing out the message TPX III is presenting to all freedom-loving Americans across this country:

Bookworm Room lays it out on a personal level; Terresa Monroe Hamilton at Noisyroom is pouring it on; John Ruberry at Marathon Pundit has his foot on the gas pedal, and he has a must see Lloyd Marcus Show video — “I was blessed with a dad” — tissue alert! Also, Marathon Pundit will be attending the Rockford, Illinois rally on Day 11.

INSTAPUNDIT’S coverage is making it possible for all of us to truly become AN ARMY OF DAVIDS. Turning spectators into participants — we ARE making history here!

Corny? Maybe, but I found myself humming it as we rolled into Nashville, Tennessee’s Centennial Park late Easter Sunday afternoon for our second and final rally of the day. We had a full line up — the Rivoli Revue’s Kay and Ron rejoined us after a three-day gig elsewhere. Saturday Night Live comedienne Victoria Jackson and her friend Jim Labriola, stand up comedian who played Benny Baroni on the Home Improvement TV series, were added as special guests, as was JB Williams, political writer for Canada Free Press. I later grabbed JB for a fascinating interview on our radio show. While the Rally went on outside under the setting sun, we sought the quieter confines of the Reagan Blue Bus where we spoke for a solid 20 minutes or more about the upcoming election, Obama’s indiscriminate use of executive orders, Obama’s constitutional eligibility, impeachment, and the illegal legislative process Obama is willing to use to push thru the health care bill, amnesty, cap & trade, and just about anything else he wants. Here are a few photos of the well-attended Nashville event. Tom Kovach, author and political activist came by to say hi! as did Ken Marrero, the Blue Collar Muse blogger (below in — what else? a blue collared shirt). Posing with us from left to right are Susan Lynn, candidate for Congress, Andrea, Ken, and his wife (whose name I have — regrettably — forgotten. Will update with her name in due time). On Monday, Day 10, three rallies! We’ll be up and at it bright and early with a 9 a.m. central time rally in Evansville, Indiana. Later in the day we’ll roll in to St. Louis, Missouri for a 2 p.m. CT rally at Frontier Park, and cap off the day with a third and final rally at 6 pm at the Springfield Fair Grounds in Springfield, Illinois.

A big thank you to Terresa at Noisy Room, Bookie at Bookworm Room and Right Wing News, John Ruberry at Marathon Pundit, and Glenn Reynolds at Instapundit for helping us get out the very important message about what the Tea Party Express is accomplishing on the road! If you’re blogging about the Tea Party Express III “Just Vote Them Out!” national tour, send me an email and we’ll include your link here.

Remember, each Tea Party rally can be viewed via your computer, so tell friends, family, neighbors or strangers in the street about TEA PARTY EXPRESS TV–brought to you by tour embeds, Wm and Selena Owens. Btw, they also produce that …

Ramblings By olbroad
I wandered around quite a bit, and got as many pictures as I could. Some of the best ones I missed by being someplace else. Hey…I can only move so fast, y’know. So, in as best order as I can get them…..the Tea Party Express – Tupelo! …

Disgusting: NYT compares Tea Party to Weathermen « Sister Toldjah
Looking at the demographics of who we Tea Party people are (ordinary working Americans), it really scares the White House, Democrats and their similar-minded friends across the aisle that such a grassroots movement has expanded so.

TaxingTennessee: Tea Party News Headlines for Sunday April 4 By Ben Cunningham
Thanks to Glenn for the Insta-launch. I am searching and posting Tea Party Headlines most every day. I don’t think most people understand how pervasive the movement has become. You can subscribe to the RSS feed HERE. … TaxingTennessee –

Tea Party 2004 « Don Surber
“…and he exterminated a lot of people that he didn’t like, didn’t trust or whatever and Bush is doing the same damn thing…” “…stop calling him President Bush. There was a coup d’etat in 2000…” …