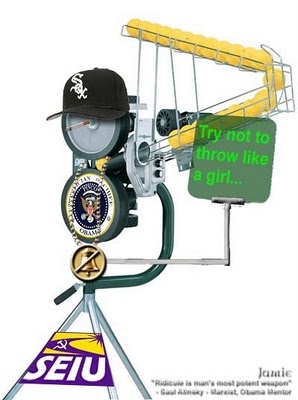 With props to commenter Judie Collins for saying the pResident had no “throwing prompter.”

The PitchingPrompter will be put to the test this Saturday in Chicago, where it will throw out the first pitch at US Cellular Field, the ballpark formerly known, to Obama, as Comminsky Park. It will be used in place of the traditional presidential first pitch, started in 1910 by William Howard Taft, during all such outings in the future, including limo rides with Larry Sinclair.

The Regime chose the machine after seriously debating an alternative plan, having Obama better explain how a first pitch will help the American people understand the game of baseball, during 17-minute, 2,500-word speeches from the mound.

Described by the always sagacious Washington Post as throwing a ball that “floated, slowly and with great loft, in the general direction of home plate, but — metaphor alert! — wild and far to the left,” Obama threw a pitch on Monday that actually looked like it had the trajectory of a ballistic missile, and maybe not by coincidence.

“Some have speculated that the pResident may have thrown that way on purpose, to make fun of girls,” White House Spokesman, Robert “Ahhh” Gibbs, said during a press conference introducing the PitchingPrompter. “The truth is the pResident used the occasion to practice our new national defense initiative, Project Eephus Pitch, which, we don’t mind announcing to our enemies, we’ll institute in response to any chemical or biological weapon attack, as opposed to launching tactical nukes.”

But when CBS’s Jake Tapper countered Gibbs, asking, “Why then, did the pResident tell announcer Rob Dibble up in the booth during the game that he couldn’t understand why the pitch was so terrible, saying, ‘Everything I threw in practice was over the plate, every time’” — Gibbs just cackled and turned away and pointed at the machine.

Still dangling from the device, swaying like a teabag, a small label contained the following product description: “Like a teleprompter, the ACME PitchingPrompter is designed to make you look far more adequate than you actually are. Guaranteed to turn eephus pitches into 100-mph fastballs, to soften jeers into cheers, and, when asked, to even name your favorite White Sox player for you.”

Speaking of favorite players, after long deliberation — not the three months it took him to decide to send troops to Afghanistan, but, still, long enough — Obama released a statement today that finally answers Dibble’s question, “who was one of your favorite white sox players growing up?”

Meanwhile, sources tell Feed Your ADHD that Obama is privately blaming the entire affair on his predecessor.

“If that damned George W. Bush didn’t look so manly when he threw out the first pitch during the 2001 World Series, the American people wouldn’t know any better. Maybe our next move should be to nationalize Major League Baseball and order all the teams to play soccer, you know, the game of my ‘home country, in Kenya,’” the pResident has allegedly told insiders.