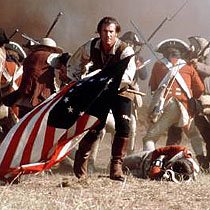 Today, in her Tea Party Express update, Andrea Shea King quoted Lloyd Marcus in his expression of the mood of American patriots they’ve encountered on their tour.

Two words jumped out at me: worry and anxiety.

These are emotions we all experience from time to time, and they are universally recognized as a Bad Thing™. The world of Big Medicine likes to refer to them as “stress.” They have medications for it. Hey, chill, dude, take a pill.

We all know that when these emotions become chronic, the effect on people is unhealthy in any of several ways. Common reactions to anxiety include increased smoking, drinking, sleeping, self medicating, and fixated TV viewing in the hope better news will arrive.

People, after sustained exposure to anxiety, become exhausted. This exhaustion leads to grief (sadness), hopelessness, and apathy. (People fond of the “conventional wisdom” of Big Medicine call this “depression.”) And therein lies the true danger.

Sad, hopeless, and apathetic (or “depressed”) people are ineffective in any kind of struggle for survival, and that has great strategic value for someone trying to subjugate a population. If you are the Borg, you continually make it clear that resistance is futile. Once you can get that to stick, the rest of the conquest is pretty straightforward. With little or no resistance from the conquered, you can now overwhelm them, and impressing your dogma schtick upon them (at gunpoint, if needed) is easy enough (Big Medicine has a name for that, too, but I’m not into psychobabble).

This is the true objective of terrorism.

Terrorism only “terrorizes” for a short period. Beyond that, people are no longer “terrified,” simply because that level of intense fear is unsustainable, and they revert to a lower intensity of fear: anxiety. You can still function (mostly) while anxious, but everything is harder, painful things hurt more, and everything is “uphill both ways.” Eventually anyone, no matter how tough, will become exhausted by anxiety. Some terrorist flies a plane into a skyscraper. Everyone is scared silly for a few minutes, a few hours, but after that they begin to worry: “Is it over? What’s next? Is it going to happen again? Will my family be safe? If it happens again, can we survive?” People become hyper-alert, watchful, wary, jumpy. Are they still terrified? No. What they are is anxious.

Is a violent, super scary event the only way to achieve the objective of terrorism? No, not at all. Ever sat in a dentist’s chair for five straight hours? Worrying about the next application of drills or sharp, pointy instruments? Having some guy spelunking around your molars looking for treasure? Yes? And what was it like when he was all done? Exhausting? Draining? Of course, there are those who will allege that dentists are violent and super scary. Yeah, but at least they smile.

Dentist not impressing you? How about someone even scarier? How about IRS Agent Thumbscrew? There are very few people indeed who don’t have some sensitivity to the threat of having their livelihood and future clamped in the vise of Big Government. How would a government go about terrorizing its population?

Well, shucks, that’s easy. Just threaten them with ever increasing intervention and meddling and taxes and ever decreasing liberty and freedom. Promote the total invincibility of government with the resistance is futile mantra. Moreover, impose crushing penalties for resisting the meddling and taxation. Criminalize dissent. “Don’t worry, be happy: it’s not just a good idea, it’s the LAW!” It won’t be long before anyone who’s paying attention and who knows his history is overtaken by anxiety and worry.

Great. Just fabulous. Out-freakin’-standing! I am reminded of Michael Jackson’s scarecrow character in The Wiz: “You can’t win, you can’t break even, you can’t get out of the game.” Apathy. The precursor to death.

Well, before we examine that, can we agree that a steady diet of anxiety will ruin your life? I mean, is it worth identifying a remedy? Well, yes. Without a remedy, things will get worse.

Frankly, something’s gotta change. Really change. And the kind of change we need is improvement, not the crap-n-pap we’re being fed.

So, is there a place for hope? The expectation that things really can get better, that we can get some relief, instead of the wishin’ for fairies and unicorns? Yes there is.

Here are some secrets you should keep close to you: anger is closer to survival than apathy; it is healthier to be antagonistic (confrontational) than to be afraid; and the path up from the darker emotions of apathy, grief, terror, despair, fear, and anger passes through pain — yes, it’s also an emotion — before you can climb through the thickets of hostility and antagonism to find the emotions where success and survival really live: interest, cheerfulness, enthusiasm.

So, when the people who simply want you to be quiet (you know, graveyards are quiet), sit down, shut up, and go back to your TV, tell you that “anger is bad” and you mustn’t be “hostile” or “confrontational” because, hey, that means you’re a nut job and a hater, feel free to ignore them.

Realize that the people who would keep you in chains want you to be anxious, afraid, sad, exhausted, and hopeless, so they can take care of you. When you know that your emotions are the weapon being used against you, then you can regain control, shake it off, endure the emotional stings and jolts as you rise from the depths to take back your life.

Who is your terrorist? Who is your Borg? Who keeps telling you resistance is futile? Who wants you to shut up and be quiet? Okay, so do you still want to be afraid of that Borg? Or would you prefer a more energetic response? Notice any anger bubbling up?

It’s okay to get mad. In fact, it’s necessary.

Fight on through. You’ll run into — literally — random chaff and confusion. That’s okay. Pick a target, an objective, lock on, and go after it. And, as you do, you’ll find your morale is higher than it’s been in ages. Grab your friends, help them shake it off, and point them at an objective.

There’s only one way out, and that’s through the obstacles being placed in your path. Kick ’em over. Push them aside. Claim your goal. When you’re not afraid, the terrorists — whoever they are — lose.

Yes, if we do nothing, we’re pretty much doomed. But “doing nothing” is what your Borg want you to do. They want you worried. Refuse to stew in that mess. Remember: they cannot enslave you without your help.

Grab your bootstraps. Haul yourself up. Kick some ass.

And come stand in the sunshine with me.

6 thoughts on “Exhaustion From Anxiety: The True Terrorism”