Hat Tip: Brian B.
From: The Right Scoop

The Washington Post – What Glenn Beck meant about social justice

Andrea Shea King – As expected Bill O’Reilly & Megyn Kelly sellout their country and make FOOLS of themselves…Threw LTC. Lakin Under the Bus! Got ANY Journalists!?

examiner.com – Obama: Tea Parties should be thanking me

END_OF_DOCUMENT_TOKEN_TO_BE_REPLACED

Bill Murphy, Chairman of the Gold Anti-Trust Action Committee delivers his testimony about a whistle-blower in the gold price suppression scheme to the Commodity Futures Trading Commission on 3/25/10.

For more than a year now we’ve stood in the rain and the cold and the heat and in hostile circumstances and on street corners and at rural crossroads and outside local and state and federal buildings, protesting a sorry excuse for a president and his merry band of Congresscriminals.

First HE had us labeled as domestic terrorists, then he didn’t know we existed, then HE called us teabaggers, then HE acknowledged his destiny to be a one-term president — and now HE is “amused” by us.

HE is amused by us? We are the reason Arlen Sphincter turned tail and joined his natural-born party when the backlash over his support of Zero’s $787 billion turtle tunnel bill threatened his re-election as a Republican, and we are now the reason Sphincter won’t even come close to winning his seat back against upstart Pat Toomey. We are the reason Scott Brown now sits in a seat formerly occupied for nearly half a century by a fat cretinous murdering drunkard whoring Democrat thief, the reason dirty Creigh Deeds was done in dirt cheap (a saying admittedly stolen from Pat Dollard), the reason New Jersey now has Gov. Chris Christie to rightfully gut it’s bloated government and eventually return power to the taxpayer, the reason sitting RINO Florida Gov. Charlie Crist will have to run as a Democrat-lite (an independent) to even have a chance at winning his battle to become a U.S. senator.

HE is amused by us? We’re the reason it took so long for HIM to get his precious signature – and likely final – achievement accomplished: Obamacare. We are the reason Obama needed to make the Louisiana Purchase and the Cornhusker Kickback and the fake executive order preventing federal abortion funding just to squeak that monstrosity of freedom-grabbing piece of crap through by a Congresscriminal’s nose.

HE is amused by us? We’re the reason (so far) that 17 clownish Zombiecrat Congresscriminals and 5 Zombiecrat Senators are retiring. We’re the reason the battle for the Senate on April 15, 2010, looked amazingly red and the current map of the potential November makeup of the House of Representatives that, only 18 months ago was bluer that Babe the Blue Ox’s balls, now looks like Iran nuked the entire friggin’ nation, not that The One would do anything about nuclear attacks, either.

HE is amused by us? We are the reason Senate Majority Leader Harry Reid (Dickhead, Nevada) will lose in November, even with a third-party candidate running for his seat, why only a few supporters showed up to hear him recently speak in his hometown of Searchlight, where conversely thousands were drawn to hear Sarah Palin speak and where leftists threatened Andrew Breitbart.

HE is amused by us? We are the reason that, one by one, the names on the list in the following image will be sent into retirement, crossed-off to their bearers’ humiliation, eradicated from the American political landscape, forever. 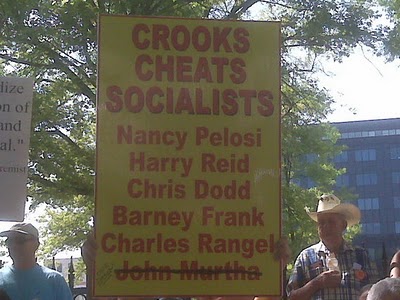 HE is amused by us? We are the only thing that can prevent his vision of America’s future, a remade and broken-down shell that is mediocre and timid and lagging behind developing third-world countries in technology and capital and world prestige, our future grandchildren saying these first words: 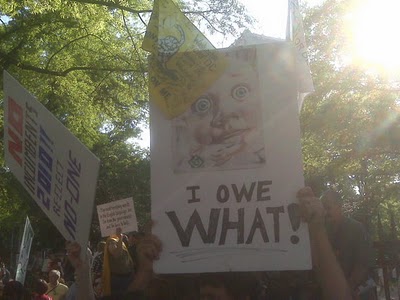 HE is amused by us? We are this nation’s future, the purveyors of our government’s original core values of fiscal responsibility and limited government and free-market enterprise, the defenders of the intent of our Founding Fathers and their achievement – the creation of the greatest nation this earth has ever known … and will ever know. HE is the reason the Founders are turning over in their graves right now, screaming: 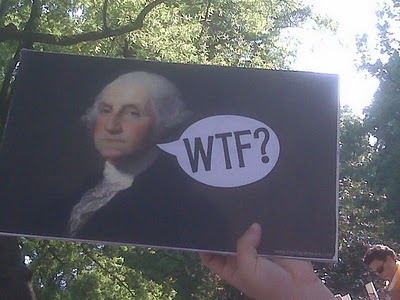 So let HIM be amused by us.

Below is a moonbat who showed up yesterday at the Atlanta TEA Party (I’ll give him credit for having stones but not for having brains), before we surrounded him, chanting “He’s not one of us,” following as the Georgia Capitol Police escorted him away from our rally, politely telling him “b-bye! Thanks for coming!” 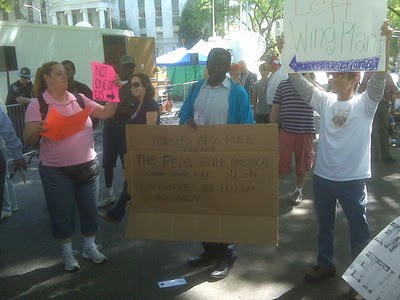 We’ll be doing the same to pResident Barack Obama in November 2012. I doubt he’ll be amused by us then.

NOTE: All photos by Snarky Basterd’s crappy CrackBerry, taken 4/15/2010, on the grounds of the Georgia state capitol in Atlanta.