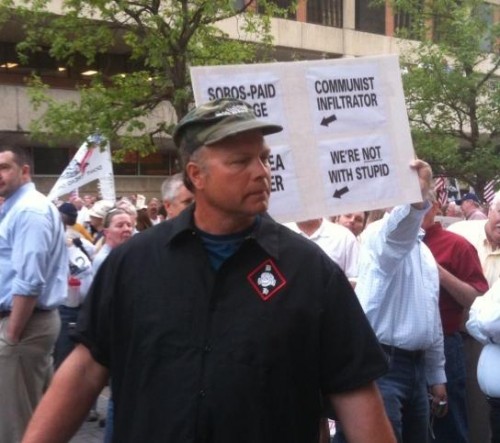 Zombie has a new post up at Pajamas Media and it’s a doozy:

Last week, a web site was uncovered that called for infiltrating Tea Party events. It was a blatant call for violence and disruption, but as far as I know the only disruption was of the infiltrators themselves.

Infiltrators in St. Louis were smacked down and stopped. Hell, they were even interviewed. Infiltrator thugs in Sacramento were physically stopped in their tracks trying to disrupt the Tea Party event. And in a completely unrelated matter, our Commie bud, Danny Glover was given brand new wrist bracelets at an SEIU rally. They go with his eyes…

Zombie covers the infiltrators at the San Francisco Tea Party rally masterfully. That must have been one unique party. Take a walk down infiltrator way and view the excellent photography taken at the SF Tea Party event by Zombie. She time-lines the event – Marxists vs. the patriots. Guess who won? 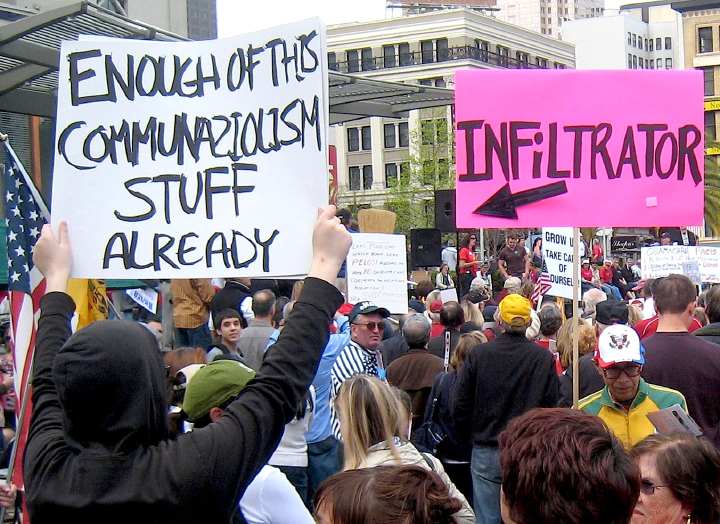 And the LaRouche dingbats were right on time… 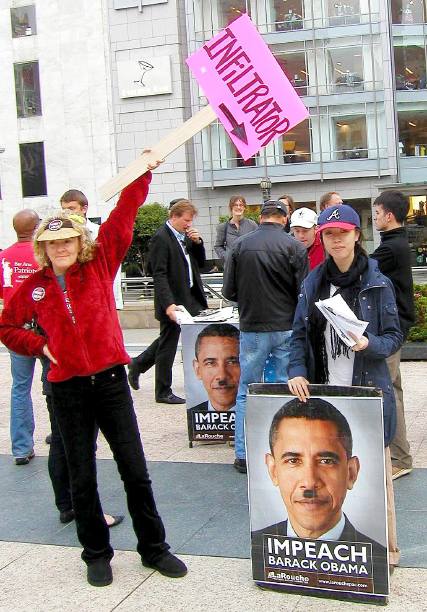 There were plenty of anarchists, communists, Marxists and other assorted whack jobs to go around. Didn’t seem to get violent though… Make sure you read Zombie’s post: Crashing the Crashers: Tea Party Infiltrators Outmaneuvered in S.F.

For a whole bunch of videos and coverage of the Tea Party Express III trip, make sure you go to The Radio Patriot. Andrea was a hit and each and every one of the people who were on that bus and who covered the trip is a patriot. Our founding fathers would be proud. Look for the Tea Party Express IV trip soon…

For some excellent writing and coverage in St. Louis and across the nation, make sure you go to Bob McCarty Writes and Gateway Pundit. These guys rock and are great reporters.

No matter how much the left and the elitists want to push the Tea Partiers into violent actions, they have failed over and over again. The violence comes from the left every time and in the end the left will manufacture an incident to blame on the Tea Party activists – just so they don’t ‘waste’ a crisis and so they can use it to implement their agenda. Nuts to the left and Nuts to the government – bring it on… This country will not go down without a fight. They may start it, but we will finish it. And you better believe we are coming for you in November to vote you out. 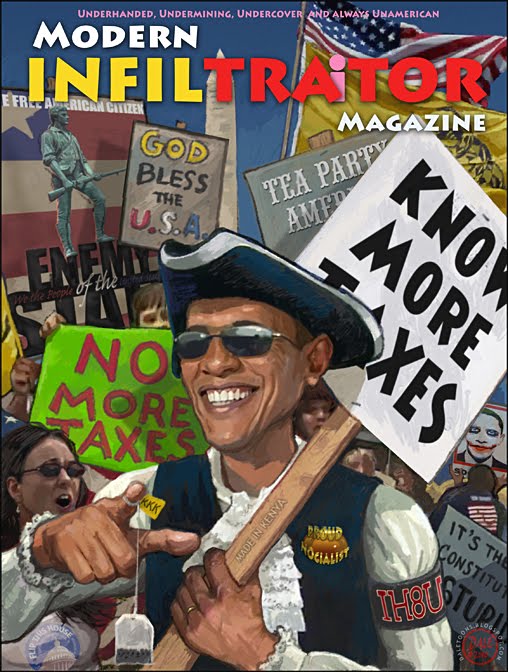 Others covering the festivities:

Michelle Malkin’s – The Crashers: They came, they saw, they failed

The Silent Majority No More

The Anchoress – “On behalf of the Obama Adminstration…”

The Anchoress – Giftedness and Othersight

NewsMax – Gaffney: Iran Could Have Nuke ‘Any Day’ Now

END_OF_DOCUMENT_TOKEN_TO_BE_REPLACED

With the conclusion of the “Tea Party Express III: Just Vote Them Out” tour, it’s time to turn our attention to winning the campaigns necessary to take back our country.

As you know, the top priority for the Tea Party Express is the defeat of Senate Majority Leader, Harry Reid, who is up for re-election in this November’s election.

And yesterday we made a big announcement – we here at the Tea Party Express are endorsing the proven conservative in the race, who has never strayed from her constituionalist conservative stands on the issues: Sharron Angle.

Today the Wall Street Journal is calling Sharron Angle the “Sarah Palin of Nevada” and Sharron was on Fox News Channel this morning and will be on Mark Levin’s radio show today. Here’s an excerpt from the WSJ report:

Sarah Palin isn’t on the ballot this year, but the Tea Party Express’s candidate for Nevada sounds a lot like her.

Sharron Angle, a former state assemblywoman, was introduced by the Tea Party Express this morning as one of five Senate challengers it’s endorsing in Republican primaries. And she certainly played well with the 200 activists at the National Press Club, with a 15-minute speech packed with quirky metaphors, folksy syntax and hot conservative buzzwords.

“Good morning American patriots! You have brought a tsunami of conservatism across this country!” she opened. “We know what we want, and that is conservative values, those things our founding fathers fought for, but also that we have children fighting for to this day, and it incumbent upon us, on us, to fight for them right here in Washington, D.C.”

The problem we face is this: the GOP primary for the Nevada Senate race is just 54 days away and we have to immediately begin our TV and radio advertising to help Angle win this race and defeat some of her establishment and RINO Republicans she is facing.

So we need your help – and fast. We need to raise $100,000 in the next week to begin our TV and radio ad campaign in support of Angle’s candidacy.

You can contribute as little as $5 up to the maximum allowed $5,000 contribution. Contribute whatever you can afford. We’re looking to kickstart this effort with 500 people contributing $100 or more. To contribute – JUST CLICK HERE.

Coming To A Theater Near You: The $4 Trillion Rip-Off (Hat Tip: Brian B.)

The ‘Repeal It’ Rhetoric Gap In The Capitol (Hat Tip: Jean Stoner)

Letter Re: Has The U.S. Already Sold Most of Its Gold Reserves?

Bernanke: US Unemployment Likely to Remain High During “Recovery”

Going For Broke In L.A.?

Impact of Volcanic Ash Surfacing for US Businesses

Now that “Climate Change” has been discredited in the “First World”, its Marxist promoters are turning to the “oppressed” masses of the “Third World” to promote their cause.

The World People’s Conference on Climate Change and the Rights of Mother Earth is about to be convened in Cochabamba, Bolivia, April 19 to 22, 2010.

Bolivia’s Marxist president Evo Morales, is to use this huge gathering of “indigenous” peoples, revolutionaries and anarchists to promote his idea for an international referendum on “Climate Change”.

Morales wants at least 2 billion people to vote in his proposed referendum;

At the Copenhagen conference, President Evo Morales proposed that, given the lack of an accord among governments, the people should be consulted in a referendum of global scale. He put forth the following five questions for that referendum:

1) Do you agree with reestablishing harmony with nature while recognizing the rights of the Mother Earth? YES or NO

2) Do you agree with changing this model of over-consumption and waste that represents capitalist system? YES or NO

3) Do you agree that developing countries reduce and reabsorb their domestic greenhouse gas emissions for temperature not to rise more than 1 degree Celsius? YES or NO

4) Do you agree with transferring all that is spent in wars and for allocating a budget bigger than used for defense to climate change? YES or NO

5) Do you agree with a Climate Justice Tribunal to judge those who destroy Mother Earth? YES or NO

The working group will discuss the pertinence of this proposal, the questions it will ask, and the concrete aspects of organizing a referendum at the global level with the participation of different peoples and progressive governments.

Don’t laugh. It is highly likely that the United Nations, or other international organizations will pick up this idea and run with it.

“Climate Change” is not dead yet. the movement has changed its target audience from the educated and industrialized West, to the impoverished and less literate peoples of the planet.

“Climate Change” will become less and less about pseudo science and more and more about “justice”.