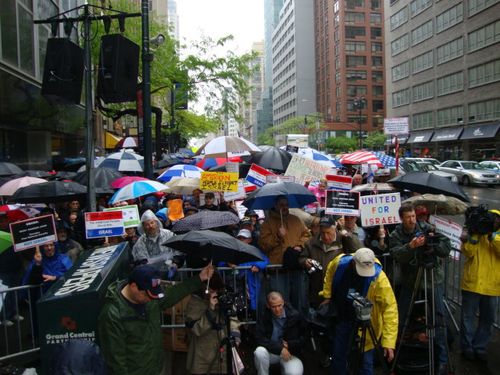 “Obama – Stop Pressuring Israel” was the rallying cry of the day, as over 2000 supporters of Israel gathered in front of the Israeli Consulate in New York City on Sunday afternoon, April 25th to express their views on the current strain in relations between the United States and Israel. Organizers of the rally had expected thousands more to attend but the inclement weather kept many away.

The rally was sponsored and organized by the Jewish Action Alliance, a pro-Israel activist organization that is renowned for championing issues of Jewish security. Beth Gilinsky, the spokesperson and chief strategist of the Jewish Action Alliance said, “We are outraged that President Obama is scapegoating Israel and wants to expel Jews from their homes in Jerusalem. President Obama and Secretary of State Hillary Clinton display more anger about a Jewish family building a home in Jerusalem than Iran building a nuclear bomb.” Expressing the sentiments of those in attendance at the rally, she said, “Vast segments of the Jewish community will not tolerate the President’s continuing attacks on Israel. Grassroots Jewry will not be silent.”

Noticeably absent from the lengthy roster of organizations endorsing this rally were the major American establishment Jewish organizations such as the World Jewish Congress, the ADL of B’nai Brith, the American Jewish Congress and the United Jewish Appeal. It has been suggested that these liberal Jewish organizations are supportive of President Obama’s agenda in the Middle East and don’t want to damage their relations with the current administration. Amongst the plethora of organizations endorsing and participating in the rally were, Stand With Us, a college campus activist organization that spotlights hate speech against Israel, Christians and Jews United for Israel, Children of Jewish Holocaust Survivors, Artists 4 Israel, Z Street, The Jerusalem Reclamation Project, The Center For Defense of Democracies, the AISH Center, AMCHA; Coalition for Jewish Concerns, The Jewish Political Education Foundation and the Endowment for Middle East Truth.

Radio talk show host Steve Malzberg and columnist Rabbi Aryeh Spero served as the masters of ceremony as they introduced a litany of speakers representing a broad spectrum of both Jewish and non-Jewish support for Israel. Rabbi Yaakov Spivak of Monsey, NY, a longtime Jewish activist, radio talk show host and a Daily News columnist intoned, “President Obama, we’re here today to tell you something. In Warsaw, they told Jews where we could build, in Lodz they told Jews where we could build, in Paris they told Jews where we could build. You will never tell us where to build in Jerusalem. We are home and Israel is our country. You are not our landlord and we are neither a vassal state nor a banana republic. Our mandate to be here today is none other than our holy Tanach, our bible which says, ‘For the sake of Zion I will not be silent and for the sake of Jerusalem I will not be quiet.'”

Holding aloft signs saying, “Jerusalem: Israel’s United and Eternal Capitol,” “Hillary Clinton: Pressure Iran, Not Israel,” “Obama: Stand Up for America, Stop Bowing to Saudi Kings!” and “Obama: Jews Will Not Be Silent,” the rally participants passionately expressed their anger at the shift in US foreign policy as it pertains to Israel. Jackie Donney, 55, a Christian supporter of Israel who traveled from Newton, Pennsylvania to attend the rally said, “Look, we all know the background of Barack Obama. He is a disciple of Rev. Jeremiah Wright, one of the greatest haters of Israel and America. I think it is downright sinful that Obama has placed such tremendous pressure on Israel to make major territorial concessions in the name of a false peace. The Palestinian government is an Iranian proxy and as such is bent on the destruction of Israel and the Western world. Just look what happened when Israel forcibly evicted Jews from Gush Katif. It didn’t bring peace and now the US is demanding that Israel relinquish parts of Jerusalem and all of Judea and Samaria. I say, ‘Never, Never, Never.'”

Another rally attendee, Rabbi Joseph Rosenbluh of the Young Israel of Vandeveer Park in Brooklyn said, “In our Tehillim (the Book of Psalms), we learn that our ultimate salvation lies with our Almighty G-d. It is up to all Jews to ferociously cleave to Hashem (G-d), to walk in His ways and to follow His commandments. In every generation we find that there is no shortage of Jew haters and other miscreants who seek our destruction. There is a new Pharoah in town (Obama) who does not know Joseph (the Jewish people) and we comprehend from our history that G-d will deal with our enemies if only we acknowledge His majesty and glory.”

A formidable contingent of Hindu and Sikh supporters of Israel was also present at the rally. “We understand all too well that a policy of appeasement towards Islamic radicalism will never bring peace to Israel or the civilized world, declared Satya Dosapati of the Hindu Human Rights Watch. “As Hindus, we have been massacred by Muslims for thousands of years. If President Obama really believes that isolating and demonizing Israel and publicly humiliating Israel’s Prime Minister is not emboldening our Islamic enemies, then something is really wrong. Israel is a peace seeking nation and we unequivocally support their right to their homeland. The world must realize that if Israel falls then the entire world will come under the domination of a blood thirsty Islamic caliphate,” he continued.

Meir Rosenblatt, of Passaic, New Jersey said, “At the most recent AIPAC convention, Secretary Clinton said that Israel must relinquish Judea and Samaria in order to maintain both a democratic and Jewish state. It is clear that Israel is sitting on a demographic time bomb that is all too real. 20 years ago there were only two Arab members of Knesset and now there are 10. The Arab birthrate is skyrocketing while the Jewish birthrate is not. There is no educated Jew that can honestly say we weren’t warned that this would happen. Rabbi Meir Kahane, of blessed memory spoke of this back in the late 1970s and everyone called him a racist and a fascist because they didn’t want to hear the painful truth. Now we have boxed ourselves in a corner because we didn’t listen to his prescient message.”

Helen Freedman of the Americans for a Safe Israel said, “There is no way to establish peace with those who call for your destruction on a daily basis. That is exactly what the Palestinian propaganda campaign is all about. Lies, half-truths and distortions. AFSI is promoting the idea of “Shalom” (peace) through the concept of “Shalem” (a whole Israel). There can only be peace through strength and security. When the Arabs realized that they could not prevail against Israel militarily, they embarked on a course of diplomatic destruction and we are here to speak truth to the canards that they espouse.”

More on the march: