TOMORROW WHEN THE WAR BEGAN follows the journey of eight high school friends in a remote country town whose lives are suddenly and violently upended by a war that no-one saw coming. Cut off from their families and their friends, these eight extraordinary teenagers must somehow learn to escape, survive and fight back.

The Radio Patriot – Is it possible?

Gateway Pundit – Change… Only 4% of Pakistanis Speak Well of America

Gateway Pundit – Newsweek: We Are All Broke Now

Gateway Pundit – Arizona Governor Jan Brewer to Barack Obama: “No One In Arizona Is Laughing” (Video)

Gateway Pundit – Andrew Breitbart: “The Left Is, in Essence, The Media”

END_OF_DOCUMENT_TOKEN_TO_BE_REPLACED

This commie ba$tard can kiss my capitalist a$$.

Goldman Sachs & Islamic Banking – the Next Security FraudDisaster, with a Terror Finance Twist

Pentagon to Congress: Stop spending so much money on troops

A great Fox News interview with Ron Paul about the Greece-soon-to-be-USA problems.

The latest Friday Follies: Bank closures in Minnesota and Florida.

Cheaper Gasoline May be Just Down the Road

Make sure you read the entire post. This took guts and is exactly what all of us should be doing. Know thy enemy… 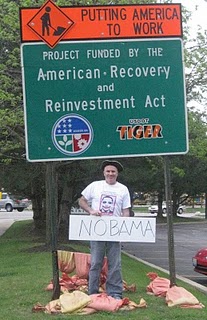 The guerrilla must move amongst the people as a fish swims in the sea.” Mao Zedong.

Three weeks ago I received an e-mail from Barack Obama’s political arm, Organizing for America, inviting me to a Camp OFA training session in Evanston, Illinois, just a few miles from my home. I signed up, under my real name. I have an OFA online account.

A few days later I received a Monday phone bank call (more on that later) from an enthusiastic volunteer from the Democratic Party of Evanston (DPOE) confirming my interest, and asking me if instead of attending the May 5 session I signed up for, would I be interested in attending a second meeting, one week later? It seems that response was so overwhelming, that this training session would have to be moved to larger quarters, in this case the Firehouse Grill on Chicago Avenue. Originally, the meeting was to be held at DPOE headquarters.

I opted for my initial choice.

Evanston, which is the home of Northwestern University, is heavily Democratic. In the 2008 presidential election, the Obama/Biden ticket squeaked by with 87 percent of the vote.

“We’ve got it locked down, DPOE Secretary Brian Miller told us during the training, “we only elect Democrats.” True, very true.

It’s essentially a tea party-free zone, but there was room for one “teabagger” that night. More on that later too.

read all of it…