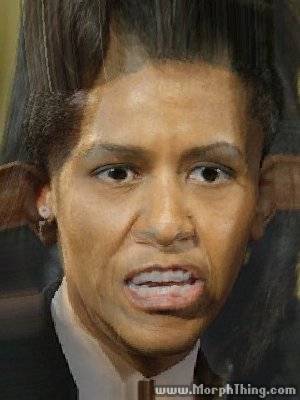 This is a morph image I made of Mobama and Obama at this site, which I found over here. I just love the donkey ears and lopsided eyes and protruding mouth.

“I take responsibility. It is my job to make sure that even when the sky really is falling I get a great photo op in Louisiana, then take a long, needed vacation that I justly deserve,” Obama declared during a news conference at the U.S. Coast Guard Station Grand Isle, Grand Isle, Louisiana.

“Gilligan may have gotten lost on his three-hour tour, but I’m certainly not going to get sucked into anything enduring here during my three hours on the Gulf Coast,” the pResident said. “Let me be clear, it is well known that I spend way more time golfing than I do attending to the business and troubles of America and … I … I … I … ah have a tee time to make.”

He called the vacation, now his 300th since taking office, an “unprecedented necessity” and blasted a “scandalously close relationship” between Chris Matthews and his aura.

Obama announced new steps for planning his many vacations, including continuing a moratorium on showing up for any events that honor the millions of veterans who’ve died for this country. He also said he has suspended plans to plug the hole leaking oil into Gulf of Mexico until after he takes a vacation next week from this vacation, despite recriminations from his daughter.

The president’s direct language on being in charge of planning his vacations, which he repeated several times, marked a change in emphasis from earlier administration assertions that, while the Regime was overseeing his many lengthy and costly trips away from the White House, it was Bush’s fault the Oval Office had the expertise and shiftiness to make sure Obama avoided being around when he was needed to lead the nation.