Buy The Road to Serfdom and read it. Your future may depend on it some day…

There’s a story out of Provincetown, Massachusetts; a public school plans to hand out condoms to elementary school children regardless of parent’s desires. My guess is the school board believes it has authority under the authority of “in loco parentis”. Don’t ask me why the phrase is prefaced with “in”; that’s just the way it is, as three little mice would sing during the movie, Babe.

There are plenty of references on the internet to the term and its historical links all the way back across the pond; but I’ll use the Free Dictionary’s definition for the sake of brevity.

“In loco parentis is a legal doctrine describing a relationship similar to that of a parent to a child. It refers to an individual who assumes parental status and responsibilities for another individual, usually a young person, without formally adopting that person…”

“By far the most common usage of in loco parentis relates to teachers and students. For hundreds of years, the English common-law concept shaped the rights and responsibilities of public school teachers: until the late nineteenth century, their legal authority over students was as broad as that of parents. Changes in U.S. education, concurrent with a broader reading by courts of the rights of students, began bringing the concept into disrepute by the 1960s. Cultural changes, however, brought a resurgence of the doctrine in the twenty-first century.”

I have to wonder about the sanity or mindset of anyone who’d seriously consider handing out condoms to any student in the public school system regardless of age without having some kind of meet and confer with that student’s parents or legal guardians. The article clearly noted that parents have no say in the matter. It would appear that certain public school’s administrators believe they have a greater right to the moral upbringing of children temporarily placed in their care than the parents for whom they are granted such stewardship.

“Dr. Beth Singer, the school superintendent, said since there is no age limit on the distribution policy, said she wanted to ensure that younger students requesting condoms receive information on their use.”

I have to wonder what kind of family environment Dr. Singer was brought up in if she honestly believes there’s nothing wrong with handing condoms to children between the ages of 5 to 12. I’ll bet she has an autographed copy of It Takes a Village somewhere in her office; pages dog eared, passages underlined and notations made in the margins.

“Singer said that although sex education is taught in health classes, there isn’t any detailed instruction on condom usage.”

That last line takes me to yet another decidedly bizarre story involving public schools taking liberties with their supposed “in loco parentis” stewardship. Todd Starnes article, Graphic Sex Ed Class Under Fire, explained how a Planned Parenthood presentation went beyond education as it may have even offered raw pornography to students.

“Parents are outraged after young teenagers were instructed on graphic sexual acts during a Planned Parenthood sex education class at the local high school in Shenandoah, Iowa.”

The law provides mandatory sex education; however, the law also stipulates that parents are to be notified in advance of the presentation. Parents of high school students in Shenandoah, Iowa, were not notified and many have voiced outrage.

What is going on in our public schools? Is it any wonder our children are confused about right and wrong since the moral side of sex is bared from the classroom under separation of church and state? Some students, for lack of proper home environment or parental oversight may not know that that putting on a condom is not the same as abstinence or avoiding sexual relations completely? Public schools are teaching sex education classes as if morality and sexual activity had no connection.

Hardly a week goes by without reading about some teacher being indicted for having sexual relations with a student or why Planned Parenthood gave instructions to lie in order to obtain an abortion to someone posing as a 15 year old pregnant girl. Sexual relations are reserved between a husband and wife; at least that’s what was taught in my home along with a healthy majority of Americans ever since our nation was founded. Have times changed that much; the godless left would have us believe so.

Public schools teach reading, writing, arithmetic, science and even sex education; can’t have prayer, that’s against the law. The idea that parents and children must forego family values in the classroom is absurd. If these stories are any indication of how administrators in our public schools or Planned Parenthood represent, or in this case, ignore family values under authority provided by “in loco parentis”, then we need to change the definition to just plain “loco” because parents have lost their say in the matter.

The Hill – Pelosi asks for donations to fend off potential GOP investigations (Hat Tip: Brian B.)

Eurasia Review – Naxal Threat – Always In The Line Of Fire

The Strata-Sphere – Obama Finally Has To Prove His Leadership

examiner.com – Mexico tries to punish Arizona for defending itself

The Daily Bell – Can Government Control the ‘Net?

Bookworm Room – What gets Obama’s goat?

The Radio Patriot – Fresh Hell with the Stroke of a Pen

END_OF_DOCUMENT_TOKEN_TO_BE_REPLACED 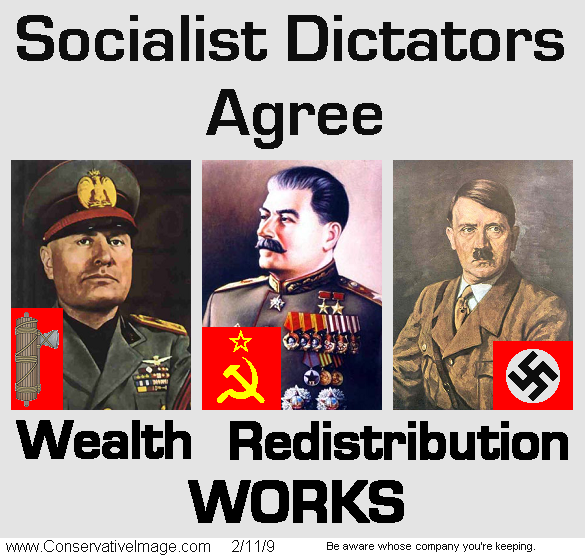 Celebrities and the Democratic Party have been beating the drum for decades on the need to redistribute wealth… take from those who have it and give to those who don’t. There’s simply no excuse for Democrat politicians’ failure to fulfill their promise since they control all three branches of government, right?

Remember the gal who verbally attacked Pelosi about where her groups’ promised money was at the “America’s Future” event a few weeks back? The desperation in her voice definitely struck a cord.

So I decided to do some digging to find the wealthiest and most successful Capitalists in our country so that we would know where the wealth is.

But what I found was shocking! Among the wealthiest and most successful Capitalists in our country are the very people who are beating the drum on the need to redistribute wealth. The Democrat politicians and celebrities are lying to their supporters.

And here are the politically outspoken celebrities, TV personalities, and White House visitors…

Just 50 people listed here who are among the most successful Capitalists in our country have a combined wealth of over $139 BILLION!!! If anything, this figure is low because they are good at hiding money to avoid paying their fair share of taxes!

Al Sharpton is on the Wealthy Capitalist List above; let’s hear what he has to say. Listen carefully when he says, “the dream was to make everything equal in everybody’s house.”

With Sharpton’s $5 MILLION, do you think HIS house is equal to yours?

Nancy Pelosi is on the Wealthy Capitalist List above: let’s hear what her audience has to say… They voiced frustration that they had supported Obama, Pelosi and the Democrats, but don’t see the Federal Funding in their states they thought would be coming their way.

With Pelosi’s $95.9 MILLION, do you think she’s spreading HER wealth to these people?

Examples of their hypocrisy – of ALL those listed, and many who aren’t – are endless.

So… if the lying Democrat FAT CAT Capitalists listed above aren’t going to give up their wealth and are actually positioning themselves to reap MORE wealth, where will President Obama (sitting on his cool $5.9 MILLION) and the Democratic Party get the money to redistribute?

Redistribution Obama-style is the Progressive left’s new poverty measurement and the plan does not include a way to pull the poor out of poverty but rather to keep them there and control them for political reasons – forever.

In early March, the Obama administration announced it will create a new poverty-measurement system that will eventually displace the current poverty measure. This new measure, which has little or nothing to do with actual poverty, will serve as the propaganda tool in Obama’s endless quest to “spread the wealth.”

Under the new measure, a family will be judged “poor” if its income falls below a certain specified income threshold. Nothing new there, but, unlike the current poverty standards, the new income thresholds will have a built-in escalator clause. They will rise automatically in direct proportion to any rise in the living standards of the average American. Read the full article HERE.

In reality, this is how redistribution of wealth works: The government takes from and destroys the Middle Class as well as the hope, possibility and ambition of the poor to ever reach that next level.

The Middle Class becomes a small disgruntled group that is taxed and worked to death, just to stay a few steps ahead of the poor they support.

The wealthy FAT CATS, who play the Democratic Party game and are part of the system, get richer. The others who buck the system get taxed until they can’t fight it any longer, so if still allowed they leave and take their money, jobs and ingenuity elsewhere.

Do a little homework and look at the promises of every Socialist and Marxist inspired government that has come to power and compare it with the outcome: the USSR, Hitler’s Germany, Venezuela today, Cuba, Communist China, North Korea and the list goes on.

Take a look at the lifestyles of those who control the Socialist and Marxist governments… THEY have all the wealth while the people suffer.

Democrat politicians and celebrities are lying to their supporters. When will these supporters wake up?