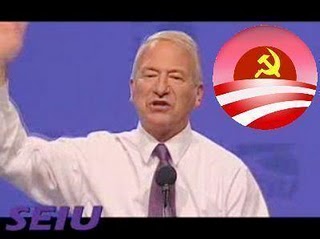 Andy Stern wasn’t kidding when he publicly stated the most famous rallying cry of Communism:[1]

Stern professed, “Workers of the World Unite? It’s not just a slogan anymore.”

The most frequent visitor to the White House with 27 visits under his belt in the first 8 months of the Obama administration, Andy Stern started his career with the Service Employees International Union (SEIU) in 1973. He was elected president of SEIU in 1996.

Through Stern’s leadership, the SEIU has funneled vast amounts of financing to the Democratic Party and its candidates, far outnumbering the contributions of other unions. SEIU spent $85 Million on Democratic candidates in 2008; $60 Million going directly toward the election of President Barack Obama.

In addition, Stern is referred to as one of “the chief architects of healthcare reform.”

Of course, President Obama already planned to paint our country purple – the color of SEIU – long before he became President.

Stern’s long-time co-worker, President Obama, catapulted him to the National Commission on Fiscal Responsibility and Reform in 2010. But it didn’t end there; other inroads were paved for Stern.

SIGA Technologies, Inc. is a company specializing in the development of pharmaceutical agents to combat bio-warfare pathogens and it was announced on June 21, 2010 that Andy Stern is joining SIGA’s Board of Directors. But wait, it gets even better…

SIGA is also a Federal contractor for the government. For a list of SIGA’s contracts with the Federal government, go to: http://www.usaspending.gov/search?query=&searchtype=JTdFZnElM0Q….

Now SIGA has requested $1.7 Billion for 2010 for their BARDA project. Any bets on whether President Obama will ensure $1.7 Billion of our tax dollars go to SIGA now that Stern is on SIGA’s board?

Let’s look at what else SIGA does. SIGA is connected with the National Institute of Health (NIH). NIH’s Director, Clinical Bioethics Department is none other than Ezekiel Emanuel, Rahm Emanuel’s brother.

Without question, Andy Stern’s new position at SIGA connects him with just about everything – kids, food, pharmaceuticals, healthcare, biotech, space, defense – just about every industry through the Cornerstone Government Affairs relationships.

“Workers of the World, Unite!” clearly won’t be just a slogan anymore, as Andy Stern affirms. His plans to enact what Karl Marx and Friedrich Engels gave to Europe, the USSR, Hitler’s National Socialist (NAZI) Party in Germany and every other failed Socialist, Fascist, Marxist and Communist regime can become a reality because of the access that Stern now has, through his relationship with President Obama.

[1]The political slogan ‘Workers of the world, unite!,’ is one of the most famous rallying cries of communism, found in The Communist Manifesto (1848), by Karl Marx and Friedrich Engels. A variant form, ‘Proletarians of all lands, unite!’ is inscribed to Marx’s tombstone in German: Proletarier aller Länder, vereinigt euch!

This slogan was the USSR State motto (Пролетарии всех стран, соединяйтесь!) and appeared in the coat of arms of the Soviet Union. It also appeared on 1919 Russian SFSR banknotes (in German, French, Chinese, English and Arabic). Contemporarily, some socialist and communist parties continue using it. Moreover, it is a common usage in popular culture, often chanted during labor strikes and protests.

One thought on “WORKERS OF THE WORLD, UNITE!”