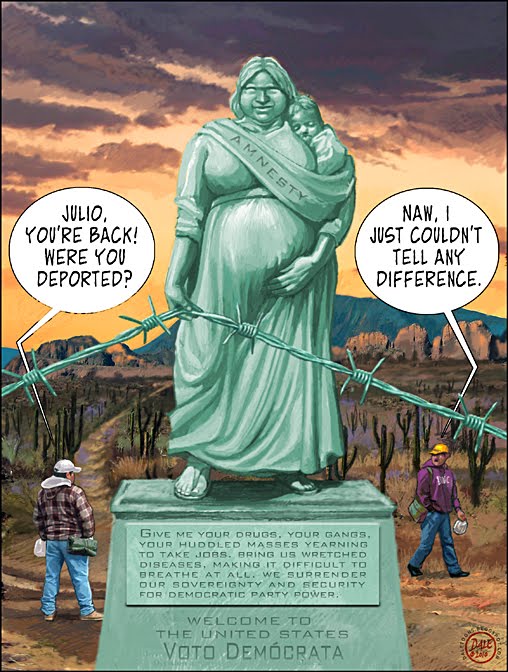 The Jawa Report – Pali Kids Song: “When We Die as Martyrs”

The Jawa Report – Remember The Dem Rep Who Stated ‘Guam Might Tip Over & Capsize’? He’s At It Again

RedState – Are They Liars or Telling the Truth? (Hat Tip: Carolyn Cooke)

Center For Security Policy – The growing concern of Brazil & Iran

END_OF_DOCUMENT_TOKEN_TO_BE_REPLACED

By: Nancy Matthis at American Daughter

The toxic chemical dispersant Corexit 9500 was pumped into the Gulf to counter the oil spill. Now it appears to have gassified, entered the atmosphere and rained down on inland farmers, damaging crops and killing songbirds:

One month ago, on May 24, The European Union Times wrote about a report prepared by Russia’s Ministry of Natural Resources for President Medvedev — Toxic Oil Spill Rains Warned Could Destroy North America:

A dire report prepared for President Medvedev by Russia’s Ministry of Natural Resources is warning … that the British Petroleum (BP) oil and gas leak in the Gulf of Mexico is about to become the worst environmental catastrophe in all of human history threatening the entire eastern half of the North American continent with “total destruction.”

Russian scientists are basing their apocalyptic destruction assessment due to BP’s use of millions of gallons of the chemical dispersal agent known as Corexit 9500 which is being pumped directly into the leak of this wellhead over a mile under the Gulf of Mexico waters and designed, this report says, to keep hidden from the American public the full, and tragic, extent of this leak that is now estimated to be over 2.9 million gallons a day.

The dispersal agent Corexit 9500 is a solvent originally developed by Exxon and now manufactured by the Nalco Holding Company of Naperville, Illinois that is four times more toxic than oil….

A greater danger involving Corexit 9500, and as outlined by Russian scientists in this report, is that with its 2.61ppm toxicity level, and when combined with the heating Gulf of Mexico waters, its molecules will be able to “phase transition” from their present liquid to a gaseous state allowing them to be absorbed into clouds and allowing their release as “toxic rain” upon all of Eastern North America.

Even worse, should a Katrina like tropical hurricane form in the Gulf of Mexico while tens of millions of gallons of Corexit 9500 are sitting on, or near, its surface, the resulting “toxic rain” falling upon the North American continent could “theoretically” destroy all microbial life to any depth it reaches resulting in an “unimaginable environmental catastrophe” destroying all life forms from the “bottom of the evolutionary chart to the top”….

….It seems like damage brought by the oil gusher has spread way beyond the ocean, coastal areas and beaches. Collateral damage now appears to include agricultural damage way inland Mississippi.

A mysterious “disease” has caused widespread damage to plants from weeds to farmed organic and conventionally grown crops. There is very strong suspicion that ocean winds have blown Corexit aerosol plumes or droplets and that dispersants have caused the unexplained widespread damage or “disease”….

The warning on the Corexit 9500 label is clear enough:

“Keep container tightly closed. Do not get in eyes, on skin, on clothing. Do not take internally. Avoid breathing vapor. Use with adequate ventilation. In case of contact with eyes, rinse immediately with plenty of water and seek medical advice. After contact with skin, wash immediately with plenty of soap and water. Wear suitable protective clothing.”

Now the stuff is raining down on us!

It has been well-known in the oil industry since the 1980s that oil-eating microbes can clean up the oil with no lasting environmental impact. They were developed at the behest of the Texas Land Office and the Texas Water Commission, and used successfully in 1990 to clean up a large oil spill in Galveston (see Business Insider — An Oil-Eating Microbe That’s Been Around Since 1989 Could Single-Handedly Clean Up BP’s Entire Oil Spill).

So why is Corexit 9500 being used in the Gulf of Mexico? Back on May 30, blogger Jo Anne Moretti published a Bombshell Exposé based on meticulous and lengthy research that she had performed showing that Democrat party bigwigs including Warren Buffett, Maurice Strong, Al Gore and George Soros reaped huge profits from the sale of Corexit. Not only that, but her findings show that some increased their holdings preceding the disaster:

There is big money and even bigger players in this scam. While they are letting the oil blow wide open into the Gulf, the stakes and profit rise.

The Dolphins, Whales, Manatees, Sea Turtles and fish suffocate and die. The coastal regions, salt marshes, tourist attractions and the shore front properties are being destroyed, possibly permanently. The air quality is diminished. The Gulf of Mexico fishing industry is decimated.

All to create a need for their expensive and extremely profitable poison.

By now an outraged public has become aware of the microbes, which were warehoused in large quantities and available for use in the Gulf. But it is too late to use them now that Corexit has depleted the oxygen in the water. The microbes need oxygen to live long enough to eat the oil.

The European Union Times report sums it up best:

…the greatest lesson to be learned by these Americans is that their government-oil industry cabal has been just as destructive to them as their government-banking one, both of which have done more to destroy the United States these past couple of years than any foreign enemy could dare dream was possible.

But to their greatest enemy the Americans need look no further than their nearest mirror as they are the ones who allowed these monsters to rule over them in the first place.

[Note: Jo Anne Moretti represents the best of the Blogosphere, an ordinary blogger whose dedicated work uncovers hidden evils that endanger us and makes them public knowledge.]

One of the top media consultants for British Petroleum gave free rent to a politician who became White House Chief of Staff. And, no, this was not Karl Rove giving a freebie to Andy Card. No, the recipient of the favor was Rahm Emanuel and the benefactor was Stanley Greenberg….

Tidal Wave of Private-Equity Deals May Be Coming

Citi: Brace For An Avalanche Of Economic Downgrades

The Scariest Financial Chart In The United States, Bar None

14 Scary Facts About The The US Real Estate Nightmare

And Now The Credit Crunch Comes To… China?

House Democrats vote to illegally silence everyone but unions

Obama: ‘On the brink of passing Wall Street reform’ (Hat Tip: Brian B.)

Venezuela Seizes 11 US Gulf Oil Rigs Off Its Caribbean Coast

NEARLY 2,000 PAGES: The legislation would redraw how money flows through economy

Government would have broad new powers to seize

DODD: ‘No one will know until this is actually in place how it works’

LIVESHOT: Union Too Strong for Own Good?

Legendary investor Jim Rogers says that silver is an attractive commodity while gold remains at an all-time high.

The US is Pushing Its Debt Towards a $57 Trillion Hole

U.S. May Follow Britain’s Lead and Pass Bank Tax. Oh, and the Brits are also discussing bumping the capital gains tax back up to 50%.

CA, FL, Other States to Get More Housing Aid

T Minus 7 Days to a LIBOR-Induced Liquidity Crunch?

Harrisburg, PA, Other Cities Overwhelmed by Economic Downturn and Debt

Taxes Coming Due for $1 Trillion in Commercial Real Estate

The government’s own documents show that the FSA program’s food warehouses are effectively empty. “Government still hasn’t begun to replenish actual reserves of food. This is mandated, funded, and empty. If the gulf disaster results in toxic rains that impact crops, the government will have no reserves of wheat, corn, soy, et cetera.”