Some of you may have gotten an interesting email recently explaining how the U.S. Postal Service recently issued a stamp honoring Islam. There was a picture of the stamp along with a request to boycott it and notify all your friends to boycott the stamp. 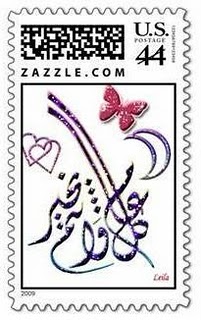 I looked up the stamp on Snopes.com history on the Islamic Stamp to see if there were any listings to back up the validity of the email; amazing what you can find with a few clicks on the internet. Yes, there is a stamp commemorating two Islamic holidays; but it’s not the one pictured in the email going around. The genuine “EID” stamp has been around since 2001 as a $ 0.34 cent stamp; but had recently been upgraded to first class rate. 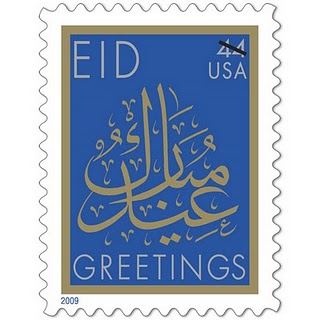 According to the Postal Service:

“The Eid stamp commemorates the two most important festivals — or eids — in the Islamic calendar: Eid Al-Fitr and Eid Al-Adha. On these days, Muslims wish each other “Eid Mubarak”, the phrase featured in Islamic calligraphy on the stamp translates literally as “blessed festival”, and can be paraphrased as “May your religious holiday be blessed.” This phrase can be applied to both Eid al-Fitr and Eid al-Adha.”

Well I’m glad they cleared that up, being dyslexic and misplacing the letters I thought we were celebrating the placement of Improved Explosives Devices. Islamic terrorists like to leave IED’s on the side of the road for unsuspecting troops. Instead of shouting “Eid Al-Adha”, these folks shout, “Allah Akbar” as American body bags are filled.

Maybe if we get some conservatives elected we’ll see yet another new stamp, the “EIB” first class stamp celebrating the “Excellence In Broadcasting” golden microphone used by Rush Limbaugh. Can’t you just see some leftist having to lick that stamp as he/she writes a letter to the FCC demanding the Fairness Doctrine be reinstated; that would be fun to watch.

I read through the history and found something else of interest, Eid Al-Adha commemorates the willingness of the Prophet Abraham to sacrifice his son Ishmael in response to God’s command; notice the difference? Christian scriptures record that Abraham sacrificed Isaac, not Ishmael; so what’s the big deal?

Ishmael was the son of Abraham’s concubine/servant Hagar, an Egyptian. Ishmael is recorded as a “son of the flesh” while Isaac was born of Sarah, Abraham’s legitimate wife. Isaac carried the Jewish lineage as “the son of promise” or “heir of promise” as Abraham’s “only son” and is referenced as a similitude of things to come regarding the Lamb of God when Abraham offered him up to be sacrificed.

Why is the distinction worth mentioning; is it all that important who was taken up into the mountain to be sacrificed, Ishmael of Isaac? The answer has to be a resounding, yes! Isaac, “the son of promise”, represented the Lord Jesus Christ, the only begotten of the Father, a worthy sacrifice. Ishmael, “son of flesh” on the other hand represented the carnal man, unworthy to portray such a demanding role.

The Koran has several vague references to Jesus as a great prophet; but relegates Him to a lesser role than that of Savior, Messiah or Only Begotten of the Father. Islam’s Mohammed made sure to downplay the Judeo-Christian scriptures in order to make it appear he was equal to or even more important than Jesus Christ. Sorry folks; Mohammed doesn’t hold a candle to God’s only begotten Son.

Our Declaration of Independence makes reference to Jesus Christ, the Word, calling Him the Creator. I don’t see much point in belaboring the issue as to whether we call Him God, Our Savior, Councilor, the Prince of Peace or Jesus Christ; this nation was of His design and creation.

“We hold these truths to be self-evident, that all men are created equal, that they are endowed by their Creator with certain unalienable rights, that among these are life, liberty and the pursuit of happiness.”

Our society has been built upon a strong foundation, one which inseparably connects us with our biblical history, a history which foretold the sacrifice of our Savior through the telling of Abraham’s “son of promise”, Isaac. If we should ever set this important link aside we then forfeit the blessings of life, liberty and the pursuit of happiness as unalienable rights; opting instead to accept something much less. I refuse to accept the alternative, that rights are granted to men through government; for if that’s true then we must also accept that government can take away the right to life, liberty and the pursuit of happiness.

I really don’t like the EID Islamic stamp, something about it makes my skin crawl; don’t think I’d ever buy one, not even on a dare. I like the Liberty Bell postage stamp, the one they call the “forever” stamp because its value keeps pace with inflation. Our Independence Day is just around the corner, let’s celebrate American exceptionalism (my dictionary claims there’s no such word) and our inalienable rights as granted by our Creator.

This article has been cross posted to The Moral Liberal, a publication whose banner reads, “Defending The Judeo-Christian Ethic, Limited Government, & The American Constitution.”

One thought on “Ishmael or Isaac”