The Young Communist League USA is getting ready to plan their role in the 2010 midterm elections and beyond. 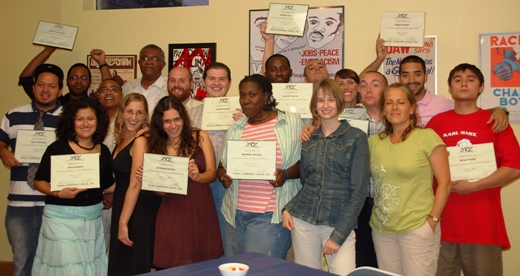 On July 17-18, in the city of Chicago, the Communist Party and the Young Communist League will hold a two day conference followed by a four day school on young people today. It’s a chance to discuss and examine the main characteristics of today’s young generation, and what economic-social-political have influenced them most. What’s new and emerging? What adjustments does the party have to make in organizing among young people? Why do young people need their own organization?

This conference/school follows on the heels of the very successful convention of the CPUSA, where many young people participated, sharing their experiences, helping to craft party policy and to build the YCL.

Youth played an extraordinary role in the 2008 elections. The vast majority supported change over the rightwing dominated status quo. The Obama campaign/movement ignited a new spirit of youth activism and brought record numbers of youth to the polls. The desire for change and the spirit of activism among youth continues today with the worsening conditions of life brought on by the economic crisis.

The movement for jobs has to also focus on the November midterm elections. The extreme right is trying to reverse the results won in the 2008 election. They want a Republican rightwing majority in the U.S. House and Senate. They want to set the stage for a defeat of Obama in 2012.

The CPUSA/YCL conference and school will examine how both organizations can work to defeat this extremely dangerous rightwing counter offensive.

Discussion topics at the school will include political economy, objective assessment of the Obama administration, the political balance of forces, the socialist perspective and the U.S., building unity and organizing at the grassroots for jobs and equality.

Despite its comparatively small size, the Young Communist League has considerable influence in United for Peace and Justice, student governments, “community organizations and Barack Obama‘s organizing for America.

During Barack Obama‘s 2004 Senate run, Chicago YCLers were active in Youth for Obama, the League also threw all its resources behind Obama in 2008.