examiner.com – Democrats: Disagreeing with us makes you a dangerous bigot

The Washington Examiner – James Carafano: Are we ready for a cyber-Pearl Harbor?

Atlas Shrugs – Obama’s Secret talks with Hamas, Look for President Hussein to Remove the Annihilationist Hamas From the Terror List in the Coming Months

END_OF_DOCUMENT_TOKEN_TO_BE_REPLACED

Obama: I Promise To Cut The Deficit In Half By 2013 (Hat Tip: Jean Stoner)

What the U.S. can learn from Canada at the G20 (Hat Tip: Jean Stoner)

Why The U.S. Will Never Have A Balanced Budget Again

History Tells US The Euro Will Not Survive, Greece Will Get Worse, And There Will Be A Trade Shock

Here’s How You Can Make A Fortune Off Of U.S. Defense Spending

Is Bernanke Secretly Preparing A New Liquidity Blitz To Save The Faltering Recovery?

Everything You Need To Know About The Future Of Oil & Gas

Forget The Bubble Talk, This Gold Rise Is For Real

Why Deficit Doves Are Even More Dangerous Than Deficit Hawks

Recovery Already Losing Steam, As Q1 GDP Is Revised Down To Anemic 2.7%

41 Awesome Properties You Can Buy From Debt-Ridden France

Being strangled by government

Price Transparency in Health Care: Will it Bend the Cost Curve?

RBS tells clients to prepare for ‘monster’ money-printing by the Federal Reserve (Hat Tip: Brian B.)

EU to ban selling eggs by the dozen

Wall Street Hiring Jumps Most Since 2008 as Guarantees Return

Silver Without a Cloud

Fannie Mae Gets Tough with Homeowners Who Walk Away

The Many Faces of Gold 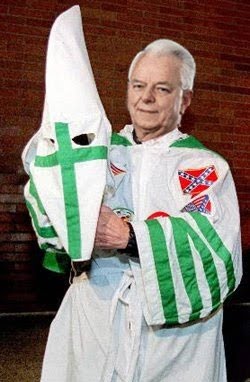 Byrd was greeted at the gates of Hell by long-time friend Ted Kennedy, who made an unsuccessful bid for president of Hell last year shortly after his own arrival.

“Having … ah … Senata Byrd at my side again can only improve my … ah … chances of … ah … taking this place ova when elections come around again next yeya,” Kennedy said.

Byrd, for his part, cried when he saw Kennedy again. “Ted, Ted, my dear friend, I love you, and I missed you,” he said.

Satan, Kennedy’s rival for control of Hell, welcomed Byrd to his kingdom of filth.

“It is with great honor that I bestow the title of KKK Grand Dragon on Senator Byrd,” Satan said. “Only a true Democrat – and we’re all Democrats down here in Hell – could have uttered the great statements he has made over the years.”

Satan spent the next 40 hours regaling the gathering crowd of demons, radical Islamic suicide bombers, and former elected Democrats, recounting many of Byrd’s earthly statements. Here are the highlights:

In 2009, while serving in that role, Nadler effectively halted a bill to deny Federal funding to the besieged radical “community group” ACORN, on the grounds that it was an unconstitutional “Bill of Attainder.”

A little while ago, the House passed an amendment to the bill that we were considering, that says no contract or federal funds may ever go to ACORN, a named organization, or to any individual or organization affiliated with ACORN. Unfortunately, this was done in the spirit of the moment and nobody had the opportunity to point out that this is a flat violation of the Constitution, constituting a Bill of Attainder. The Constitution says that Congress shall never pass a Bill of Attainder. Bills of Attainder, no matter what their form, apply either to a named individual or to easily ascertainable members of a group, to inflict punishment. That’s exactly what this amendment does.

Interestingly, the investigation was driven by Rep. John Conyers, the far left Democrat from Michigan – a man with close ties to the Marxist based Democratic Socialists of America. Strangely, ACORN is very closely tied to D.S.A. and has been for decades.

Now it turns out that Rep. Nadler also has close ties to Democratic Socialists of America.

When Nadler served in the New York state legislature in the late 1970s, he was an open and well known member of the Democratic Socialist Socialist Organizing Committee, which merged with former communists and student radicals from the New American Movement to form D.S.A. in 1982.

At the 1995 Socialist Scholars Conference, Nadler served on Panel 1 “Crisis In The City” with D.S.A. honorary chair Frances Fox Piven, co-originator of the notorious Cloward-Piven Strategy of deliberately overloading city and state welfare systems to the point of bankruptcy.

Nadler shared a panel with Frances Fox Piven and Stanley Aronowitz of D.S.A entitled “The Left and the Job Agenda in the U.S.”

Nadler was also listed as a speaker at the 1997 Socialist Scholars Conference held in March at the Borough of Manhattan Community College in New York.

The list excludes another Congressional D.S.A. member, Danny Davis of Illinois. Nor does it include at least a dozen more who have ties to D.S.A., including one of the closest of all, John Conyers.

Nadler is a long time member of the D.S.A. created Congressional Progressive Caucus. He also runs on the ballot line of the D.S.A. infiltrated New York Working Families Party.

Despite its deliberately innocuous name, D.S.A. is a Marxist organization closely allied to the Communist Party and other radical organizations.

The organization openly believes in the abolition of the private ownership of the means of production. According to D.S.A. national political Committee member, Mark Green of Detroit:

Several D.S.A. members have connections to Cuba, while another former National Political Committee member Kurt Stand is currently serving a long prison sentence for spying for the then East Germany and Soviet Union.

If one of Mr Nadler’s New York constituents would like to write to him asking the question: “Are you now, or have you ever been, a member of Democratic Socialists of America?” I would be happy to either publish his reply, or publicize the lack of.

Symbolic of rampant appeasement of radical Islam in almost every Western country.