Los Angeles based activist Evelina Alarcon has held several senior positions in the Communist Party USA, including chair of the party’s Southern California District and Secretary of its National Mexican American Equality Commission. 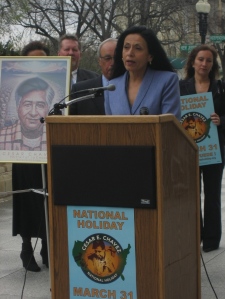 Alarcon, runs a Communist Party front out of L.A, the Cesar E. Chavez National Holiday, which campaigns for a march 31 National Public Holiday to commemorate the birth of the late Farm Workers union leader, Cesar Chavez.

A hero to the communists, Chavez trained with Saul Alinsky in Chicago for several years before his labor union career, during which he cooperated with Party members and the almost as radical Democratic Socialists of America.

Evelina Alarcon has already succeeded in getting California to adopt a Cesar Chavez Holiday and is working hard to get the idea adopted nationwide.

Naturally, Evelina Alarcon was thrilled in April 2008 when no less a figure than Democratic presidential primary candidate Barack Obama came out in support of a Cesar Chavez Holiday.

“We at Cesar E. Chavez National Holiday appreciate the backing of a national holiday for Cesar Chavez from presidential candidate Senator Barack Obama. That support is crucial because it takes the signature of a President to establish the holiday along with the Congress’s approval,” stated Evelina Alarcon.”

Addressing a largely Latino audience in East Los Angeles yesterday, Dr. Maya Soetoro-Ng shared stories about her childhood with her older brother, Barack Obama, and the effect he has had on her life. Held in El Sereno’s Hecho en Mexico restaurant, the event drew more than a hundred enthusiastic community activists, local elected officials and regular citizens… 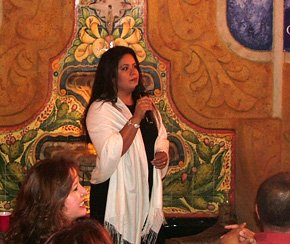 Evelina Alarcon (pictured below with Soetoro-Ng), a notable Obama supporter and the sister of long-time Los Angeles politician Richard Alarcon, presented a poster to Obama’s sister commemorating the life of Cesar Chavez.

Alarcon recounted the accomplishments of the late Chicano leader and argued persuasively for honoring his accomplishments with a national holiday. Reminding those in attendance that Barack Obama supports the call to make Cesar Chavez’s birthday a national holiday. Alarcon trusts that if Obama is elected president the holiday will become a reality. 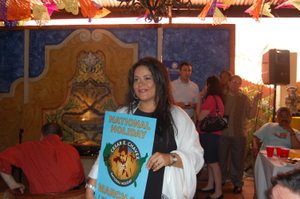 Obama has been quoted recently to say: “As farmworkers and laborers across America continue to struggle for fair treatment and fair wages, we find strength in what Cesar Chavez accomplished so many years ago and we should honor him for what he’s taught us about making America a stronger, more just and more prosperous nation. That’s why I support the call to make Cesar Chavez’s birthday a national holiday. It’s time to recognize the contributions of this American icon to the ongoing efforts to perfect our union.”

That is how a leading member of the Communist Party USA, enlisted the support of a candidate for the President of the United States and his sister, to a key Party propaganda cause.

Easy wasn’t it? No wonder the Communist Party USA claims President Obama as a “friend.”

They have had this all along – should have used it from the beginning. This is criminal…