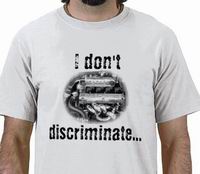 Discriminating people would assume this idiot is a leftist.

I discriminate. All the time. When I see black teenagers with gang tats coming towards me, I’ll move to the other side of the street. Now if they were carrying Bibles, I might not be as worried.

If I play backgammon with an Asian, I use different tactics than I would with say, an Irishman. Experience has taught me that Asians excel in math and I adopt my tactics accordingly.

If I am going to pick a winner on Dancing With Stars, I’ll pick the black couple, hands down. As a rule, blacks just dance better than whites. (Can I say that?)

If I need to hire someone to do yard work, I’ll choose a Mexican laborer over a welfare recipient any day. Experience has taught me that Mexicans, both legal and illegal, have a better work ethic than do those who rely on welfare.

Not a day goes by that I don’t discriminate. The left calls this racism. I call it survival.

To ignore years of life experience in favor of government mandated political correctness is the height of folly. No-one has the right to legislate morality. And no-one has the right to demand that I believe the leftists’ mantra that all cultures and people are equal. That’s just plain stupid.

People in the U.S. are born equal. The decisions they make throughout their lives, however, result in far different outcomes. Some decide to spend their lives pursuing a free lunch, while some decide to become productive members of society. In my book, that means the one who contributes to society has more value than the one that doesn’t. They are not equal.

The American culture beats the Arab culture hands down. At least for females. And the culture in my little neighborhood in Murrells Inlet most assuredly trumps the culture in most inner cities. By any measure. That’s just reality.

I personally don’t care for deadbeats. I choose not to associate with them. I also don’t care to associate with radical feminists, global warming idiots or race baiters. Experience has taught me that I just don’t do well when confronted with useful idiots. It’s a choice I choose to make. It’s discrimination.

For leftists to insist that I ignore cultural and personal differences, to insist that I adhere to their ever-changing version of reality, is akin to asking me to believe that white is black. America is still based on individual freedom. That includes the freedom to decide for myself. It’s called “having an opinion.”

Why should I agree to suspend my own judgement in favor of a mealy-mouthed platitude whose main purpose is to confer faux moral superiority on any useful idiot who opts to parrott the politically correct soundbite of the day?

Discrimination is a survival tool. It’s wisdom, not discrimination, to learn from past experiences. And to apply that knowledge in everyday choices.

Since I acknowledge that there are differences between different races, I guess I’m also a racist. Believe it or not, we all are. Hey, I wouldn’t put an Asian with a mathematics degree on the basketball court. But according to the left, that means I am “profiling.” Color me guilty.

I admit it. I profile people based on their race and appearance.

Somehow, it just doesn’t sink in that a young skinhead sporting a Nazi tattoo is the equal of say, Thomas Sowell. Based on the skinhead’s appearance, I form conclusions about him. The conclusions may be wrong, but I’m not going to bet on it. And I’m not going to invite to dinner the black guy I saw on TV dressed in military gear telling everyone to kill white babies. Life experience has taught me that he is an ignorant racist who banks on our new “culture of equality” to shield him from being held accountable for his hateful rhetoric. In my opinion, he’s just trash.

She was born with the same rights as I, and she, like everyone else past the age of 20, is a product of the choices they have made. Choices that all of us are picking up the tab for. (How equal is that?)

The mantra that all people and cultures are equal is a dangerous fallacy. Throughout history, countries that are free are not equal, and countries that are equal are not free. Again, it comes down to choice. I choose to live in a country where I am free to discriminate and judge people myself instead of being forced to adhere to the leftist illusion that we’re all equal. That’s just plain stupid. And dangerous.