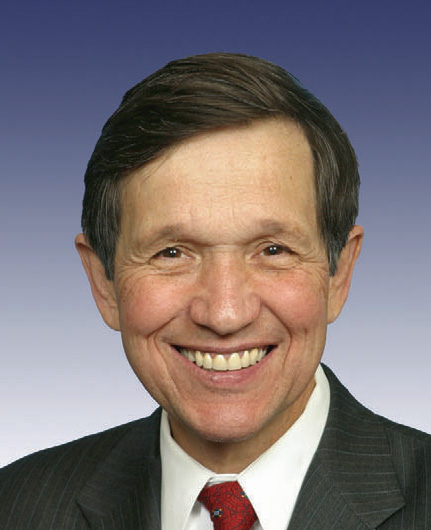 Dennis Kucinich is a Democratic member of the United States House of Representatives, representing the 10th district of Ohio. Kucinich, who has reportedly been close to the Communist Party USA since his days in Cleveland, Ohio council politics in the 1960s, was elected mayor of Cleveland, Ohio in 1977. During his 1996 Congressional run, there was considerable controversy over his ties to CPUSA member, Rick Nagin. In 2008, Rick Nagin was Labor Coordinator for Kucinich’s primary campaign. And in 2009, Kucinich returned the favor by endorsing Nagin in his 2009 City Council race. In 2006, Kucinich spoke alongside Neil Abercrombie and Christine Riddiough at a Democratic Socialists of America Political Action Committee event for Bernie Sanders which was held at the home of Stewart Mott.

The Council for a Livable World supported Kucinich in his successful House of Representatives run as a candidate for Ohio. The Ohio DSA backed him in his difficult 2004 Congressional race following a 2003 report in which they stated that he and Howard Dean were top priorities for the DSA in the 2004 elections. Also in 2004, Kucinich had made a short-lived attempt to gain the Democratic Party‘s U.S. Presidential nomination with the backing of such people as Pete Seeger, Danny Glover, Ed Asner, Howard Zinn, Studs Terkel and Barbara Ehrenreich. In 2008, rather than making a serious bid for the presidency himself, Kucinich urged his supporters to back Barack Obama. In 2004, he had served as a rallying point for left-wing voters behind his campaign – which he then delivered to John Kerry. Kucinich did the same for Obama in 2008, running for the Democratic presidential nomination and consolidating a base of left-wing support and then standing aside, handing that support base to another leftist Democrat with a greater chance of success. (more…)