The OTHER important American election this year.

Brazil holds national elections on October 3. This nation of over 190,000,000 people, the fifth most populous in the world and a diplomatic “heavyweight,” will elect a new president to replace current President Luiz Inacio “Lula” da Silva who is constitutionally forbidden from succeeding himself. This will take all 513 members of the lower house of Congress plus two-thirds of the 81 senators.

The outcome of this election will determine whether Brazil’s foreign policy continues to reflect the values of its Marxist president and his ruling Workers Party, or move in a more pro-Western direction.

Leading Communist Party USA member Emile Schepers, writing in the People’s World, lays out the stakes from a Marxist-Leninist perspective. 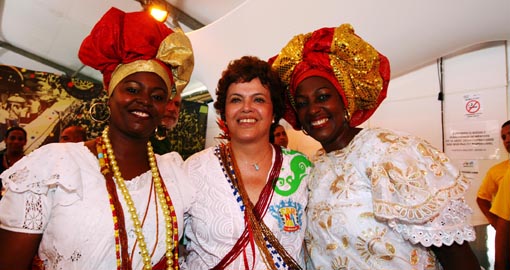 The corporate controlled media in the United States and worldwide are promoting the idea that this is a ho-hum affair, because the differences between the major candidates are “small” except in the area of foreign policy. As the campaign, which started at the beginning of July, heats up, we see that in fact the differences are not small at all. And in foreign policy, at stake is whether Brazil will continue on a progressive and independent course, or whether it will be brought back in line with U.S. desires.

In the presidential contest, the candidate of Lula’s Workers’ Party (PT) is former Energy Minister and presidential chief of staff Dilma Rouseff. Daughter of an émigré Bulgarian communist, Rousseff was active in left-wing guerrilla organizations fighting against the U.S. supported military dictatorship that ruled Brazil from the 1964 coup d’ etat until 1985. While working underground, Rousseff was captured by agents of the dictatorship, imprisoned and tortured. After her release and the end of the dictatorship, Rousseff worked for political change in Brazil’s southernmost state, Rio Grande do Sul, until becoming part of Lula’s national administration. Besides Lula’s Workers’ Party, Rousseff’s candidacy is being supported by the Socialist Party, the Communist Party of Brazil (PCdoB) and others.

Though Brazil has dozens of political parties and several are running presidential candidates, Rousseff is challenged most strongly by Sao Paulo State Governor Jose Serra of the Social Democratic Party of Brazil – a party that is actually center-right. Although Serra also had opposed the dictatorship as a student leader and had to go into exile, developments during the election suggest a move to the right. This week, Serra’s vice presidential running mate, Indio da Costa, shocked many by off-handedly claiming, without citing any evidence, that Lula’s and Rousseff’s Workers’ Party (PT) was “linked to the FARC,” the Revolutionary Armed Forces of Colombia, an assertion which Serra later endorsed. Currently in Latin America, right-wing regimes and politicians make a regular practice of claiming that their adversaries are “linked to the FARC;” this is the current form which red-baiting takes regionally. That da Silva and Serra would resort to such tactics is seen as a bad omen for how they would rule. On Monday, the Workers’ Party initiated legal action for libel and election offenses against da Costa and his party.

In fact, Lula’s domestic policies, while progressive in some ways, are hardly revolutionary and in fact are sharply criticized by some on the left, not all of which supports Rousseff’s candidacy. In foreign policy, however, Brazil, under the leadership of Lula and Foreign Minister Celso Amorim, has played a bold role that has been applauded by left-wing governments such as those of Cuba, Venezuela, Bolivia and Ecuador. Brazil was and is firm in opposition to the June 2009 coup d’ etat in Honduras and permitted overthrown president Manuel Zelaya to remain for a considerable time in the Brazilian embassy in Tegucigalpa. Brazil also annoyed the United States by joining with Turkey in trying to come up with a peaceful solution to the issue of Iran’s nuclear policy. Brazil’s size and wealth are an important factors in efforts by the Latin American left to move the region away from U.S. hegemony. Should Serra be elected, it seems very probable that he would move Brazil away from this independent foreign policy – not a “small” change indeed.

Currently Rousseff and Serra are running practically neck and neck. But since the brief election campaign has just begun, Rousseff’s supporters are hoping that as the extremely popular President Lula begins to make his views known, millions of poor Brazilians will begin to move into the column of Rousseff, who is not very well known to them at present.

Will Brazil’s coming election advance the “Lula”/Cuban instigated “Red Tide” that has swept most of Latin America, or will it be the beginning of a new advance of freedom on the continent?

Either way, there will be huge implications for all of us.