Call it coincidence if you will; but the Fox News website had an interesting combination of headline stories laid out one above the other. The first, Investigators Recommend Rangel Get Slap on Wrist, was close enough to, Lawmakers: Amnesty Plan in the Works? …close enough to the casual observer that one might come to the conclusion these were the same story. 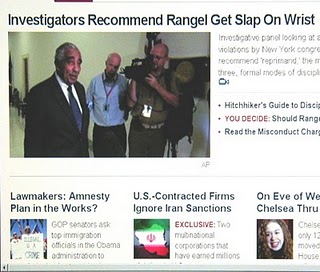 Is it any wonder congress has low approval ratings? At the very least Rangel should have to vacate his seat and forfeit his retirement; but that’s okay, congress is making him sit in the corner for a few minutes and apologize to the class.

“A group of Republican senators has written to top immigration officials in the Obama administration asking them to reveal whether large-scale plans are under way to provide a so-called non-legislative version of amnesty.”

“The lawmakers cite an 11-page draft document written by staff to the director of the Citizenship and Immigration Service that says they are reviewing several executive orders and other mechanisms that effectively would serve as a substitute for comprehensive immigration reforms.”

So much for government of the people by the people…at least at Concord a shot was fired. A complete take over of the government has taken place by an alien invader posing as an American citizen; and I’m not referring to the brouhaha over Obama’s questionable birth certificate. There have been several articles indicating or leaning toward the idea that Obama and his minions simple don’t act like they grew up loving the same America we do; but none better than, A Stranger in Our Midst, written by Robert Weissberg, Professor of Political Science – Emeritus at the University of Illinois, Urbana.

“After auditioning countless political terms, I finally realized that the Obama administration and its congressional collaborators almost resemble a foreign occupying force, a coterie of politically and culturally non-indigenous leaders whose rule contravenes local values rooted in our national tradition. It is as if the United States has been occupied by a foreign power, and this transcends policy objections. It is not about Obama’s birthplace. It is not about race, either; millions of white Americans have had black mayors and black governors, and this unease about out-of-synch values never surfaced.”

I’d recommend you read the entire article, chopping it here and there doesn’t do it justice; however, his summation is worth repeating:

“Perhaps subconsciously, Obama does remind Americans of when the U.S. was really occupied by a foreign power. A Declaration of Independence passage may still resonate: “HE [George III] has erected a Multitude of new Offices [Czars], and sent hither Swarms of Officers [recently hired IRS agents] to harass our People, and eat out the Substance.””

Obama thinks Arizona is the enemy, taking them to court for trying to protect its citizens from dangerous illegal aliens. Arizona citizens overwhelmingly passed legislation that provides a means for local law enforcement to take the place of sorely lacking federal assistance, state legislation which mirrors federal law. Now we find Obama has been working overtime, in the shadows, trying to do an end run around congress to make all those illegal aliens future voters by executive order; the whole thing stinks to high heaven. Tar and feathers might be more appropriate for Charlie Rangel than a “time out” like they do in grammar school; what do we do to a President who disregards our constitutional form of government?

This article has been cross-posted to The Moral Liberal, a publication whose banner reads, “Defending The Judeo-Christian Ethic, Limited Government, & The American Constitution.”