Howard Zinn, the prominent “progressive” historian who died early this year, has been “outed” as both a communist and a liar. 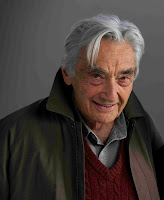 The prominent “progressive” historian Howard Zinn, whose books are force-fed to young people on many college campuses, was not only a member of the Moscow-controlled and Soviet-funded Communist Party USA (CPUSA) but lied about it, according to an FBI file released on Friday.

The file, consisting of three sections totaling 423 pages, was made available on the FBI’s website and released in response to a Freedom of Information Act (FOIA) request from this writer.

Zinn taught in the political science department of Boston University for 24 years, from 1964 to 1988, and has been a major influence on the modern-day “progressive” movement that backed Barack Obama for president.

Although Zinn denied being a member of the CPUSA, the FBI file discloses that several reliable informants in the party identified Zinn as a member who attended party meetings as many as five times a week.

What’s more, one of the files reveals that a reliable informant provided a photograph of Zinn teaching a class on “Basic Marxism” at party headquarters in Brooklyn, New York, in 1951. A participant in the class said that Zinn taught that “the basic teaching of Marx and Lenin were sound and should be adhered to by those present…”

Frank Marshall Davis, the Communist Party USA member who mentored the young Barack Obama, was also on the “security index.”

The files confirm Zinn’s membership in the party from 1948-1953 and one says he was “believed to be a CP member as of October, 1956.” However, he denied membership in the party when interviewed by the FBI in 1953 and 1954 and claimed to be just a “liberal” or “leftist.” He did admit involvement in several CPUSA front organizations, the documents say…

In 1961, it says, Zinn “attempted to recruit students to attend 8th World Youth Festival [a communist-front gathering] and was described as pro-Castro in 1962. He publicly protested United States demand for withdrawal of Soviet missiles from Cuba.”

After WW2 service and an education on the GI Bill, Zinn taught at the all female, all black Spelman College in Atlanta.

According to one of his pupils, far left author Alice Walker, Zinn shocked an audience from a local white college by declaring: “Well, I stand to the left of Mao Zedong.” – this at the height of the communist takeover of China.

Forced to leave Spelman because of his radicalism, Zinn went to teach at Boston University from 1964 to 1988.

On April 28, 1966, Howard Zinn was a sponsor of the Herbert Aptheker Testimonial Dinner. The dinner was held on the occasion of Communist Party theoretician Herbert Aptheker’s 50th birthday, the publication of his 20th book and the 2nd anniversary of The American Institute for Marxist Studies.

It was held in the Sutton Ballroom, The New York Hilton, Avenue of the Americas, 53rd to 54th Streets, New York City. Most, if not all, of the event’s sponsors came from the Communist Party’s intellectual elite.

As at February 28, 1969, Howard Zinn was listed as a sponsor of the Communist Party front Massachusetts Committee to Abolish the House Un-American Activities Committee.

By the 1980s, Zinn had apparently switched his allegiance to another Marxist group.

By the mid 1990s, Zinn was mixing with ACORN, Democratic Socialists of America and the Communist Party breakaway group, Committees of Correspondence.

With these people, Zinn was a founder of the radical New Party – later made famous by one of its most successful members, Barack Obama.

On September 20, 2001, 500 people gathered at the CUNY Graduate Center in New York City to remember the life of Democratic Socialists of America member Richard Cloward – originator of the infamous Cloward-Piven strategy, since utilized by sections of the US left to deliberately wreck the American economy.

In January 2002, a group of San Francisco leftists, mainly involved with Standing Together to Organize a Revolutionary Movement (STORM) or Committees of Correspondence, and including future Obama “Green Jobs Czar” Van Jones, founded a national anti-Iraq War newspaper – War Times.

In 2004, Howard Zinn was one of 100 “prominent Americans” who signed an October 26 statement circulated by 911Truth.org calling on the US Government to investigate 9/11 as a possible “inside job.”

…we have assembled 100 notable Americans and 40 family members of those who died to sign this 9/11 Statement, which calls for immediate public attention to unanswered questions that suggest that people within the current administration may indeed have deliberately allowed 9/11 to happen, perhaps as a pretext for war.

This is the same petition that got Van Jones into trouble in late 2009 – strangely, Jones’ name at number 46, has been “removed by request.” Fair enough, after all he was “tricked” into signing it.

Howard Zinn wrote more than 20 books, which included his 1980 best-selling and influential “A People’s History of the United States.”

Movie star Matt Damon recently worked with Zinn to turn the book into a documentary for America’s history students. Damon, who grew up next door to his idol, stated in Dec. 09 that one of his favorite books was A People’s History of the United States by Howard Zinn, a book he first started reading in 1980 at the age of 10.

No doubt Howard Zinn is currently being appropriately rewarded for his life’s work.

Boyhood mentors can influence a young man for life. Luckily Matt Damon has time left to consider his political direction.

To do so, he will have to be more honest than was his late mentor Howard Zinn.

40 thoughts on “Howard Zinn, “Outed” as a Communist and a Liar”