JournoList was an email group of up to 400 prominent U.S. journalists, academics and “new media” activists, who reportedly colluded in the run up to the 2008 election in order to influence public opinion in favor of Barack Obama and the Democrats and then turn it against their Republican opponents.

Many “JournoListas” were involved with Marxist-based organizations such as Democratic Socialists of America, or the far left Institute for Policy Studies.

Some, like Robert Kuttner of The American Prospect had close ties to the Obama campaign and Administration.

An overlapping group of “JournoListas,” at least eight strong, were centered on another organization which has close ties to three highly influential power centers – financier and “change agent” George Soros, internet giant Google and DC-based non-profit Free Press – accused by its opponents of aiding Obama Administration attempts to censor and manipulate information on the internet.

The organization in question, the Washington DC-based New America Foundation, has close ties to the Obama Administration stretching back to Obama’s alma mater Occidental College in the early 1980s.

While claiming to be non-partisan, New America clearly leans left.

The New America Foundation is a non-profit, non-partisan public policy institute that invests in new thinkers and new ideas to address the next generation of challenges facing the United States. The foundation’s mission is animated by the American ideal that each generation will live better than the last. That ideal is today under strain. Our education and health care systems are struggling with problems of quality, cost and access. The country requires creative means to address its fiscal challenges and pay for needed public, social and environmental investments. Abroad, the United States has yet to fashion sustainable foreign and defense policies that will protect its citizens and interests in a rapidly integrating world

This is “progressive” code for domestic socialism, paid for out of a decreased defense budget. 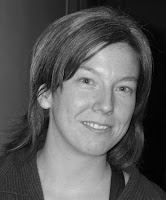 Frida Berrigan, is Senior Program Associate of the Arms and Security Initiative at the New America Foundation.

In 2007, Berrigan represented the socialist dominated War Resisters League on the Steering Committee of the communist dominated United for Peace and Justice. In 2009, Frida Berrigan was a Contributing Editor and a member of the Editorial Board of Chicago-based socialist journal In These Times, where she served alongside former Weather Underground terrorists and Obama associates Bill Ayers and Bernardine Dohrn, Sid Hollander of Democratic Socialists of America and David Moberg a veteran of the Gramsci/Marxist New American Movement and the 1976 Weather Underground organized National Hard Times Conference.

The eight known “JournoListas” affiliated with the New America Foundation are:

Another New American Foundation Schwartz fellow is Tim Wu, a professor at Columbia Law School and the chairman of Free Press. He is the co-author of Who Controls the Internet?

Free Press was founded by openly Marxist Robert W. McChesney. Free Press, which has the ear of the Obama Administration, is responsible for a report written by McChesney and Democratic Socialists of America associate and “Free Presser” John Nichols – entitled “National Journalism Strategy” which calls for “massive public intervention” into the news business. 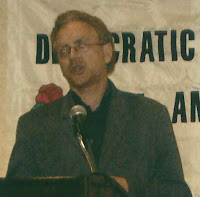 At Chicago D.S.A’s 2006 awards dinner, John Nichols of The Nation, spoke for the “need to go beyond taking back our country, beyond things just not getting worse and the need for a progressive agenda.”

Chairman of the New American Foundation Board of directors and a member of the N.A.F. Leadership Council is none other than Eric Schmidt, Chairman & CEO, Google, Inc. 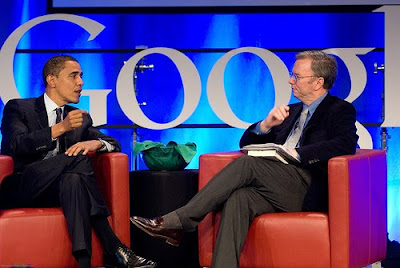 Schmidt is a member of President Obama’s Council of Advisors on Science and Technology.

There is another, more obscure Obama/Google connection. A couple of years ago, Google appointed Dr. John Lumpkin to its Health Advisory Council. John Lumpkin came from a well known Chicago Communist Party family. When John Lumpkin unsuccessfully stood for Alderman in Chicago’s 7th Ward in 1979, the “Committee to Elect Dr. John R. Lumpkin” was led by several Communist Party members, as well as activists Timuel Black and Quentin Young.

Black and Young both went on to join Democratic Socialists of America. Both also became personal friends, mentors and political supporters of Barack Obama. Quentin Young was Obama’s personal physician at one stage and attended the famous meeting where Obama’s political career was launched in the home of Bill Ayers and Bernardine Dohrn.

Jonathan Soros serves on the board of directors of his father’s Open Society Institute. Before graduate school, Johnathan Soros was a program manager at O.S.I. in Budapest. He also served as a staff member on the Clinton/Gore ’92 campaign and inaugural committees.

The Open Society Institute funded the New America Foundation to the tune of at least $250,000 in 2008. 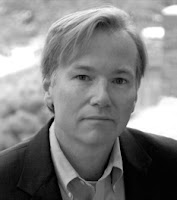 President and CEO of the New America Foundation is Steve Coll.

It turns out that Steve Coll and his wife Susan Keselenko Coll were pretty good friends of Barack Obama back at Occidental College in the 1980s.

In February 2008, in response to accusations that Obama had used drugs while being a student, journalist and blogger at The Washington Note Steve Clemons, interviewed Steve and Susan Coll about Obama’s drug use at the time – without mentioning his connection to Steve Coll.

A separate couple I found on my own and who knew Barack Obama at Occidental College are New America Foundation President and New Yorker staff writer Steve Coll and his wife Susan. I asked Coll what the depth of his and his wife’s relationship with Obama was — and whether he’d seen the presidential aspirant get “wild.” Coll told me that he was two years ahead of Barack — and his wife one year ahead — and that they were all pretty good friends. They are friends now, but at a more pronounced distance and don’t see each other much. Coll recounted that he and Susan were impressed with Obama then and saw absolutely nothing on the drug front with him — though he can’t say the same about a lot of his other Oxy pals. He said that his one wild thing that got him a lot of accolades was his hard lobbying to get the trustees to divest Occidental College holdings from South Africa, which they did.

Steve Clemons is the Senior Fellow and Director of the American Strategy Program at the New America Foundation Could he be one of the more than 200 as yet unidentified “JournoListas?”

Clemons is also a contributor to the website Havana Notes, which is dedicated to easing U.S. government sanctions against Cuba, alongside one time Democratic Socialists of America member Patrick Doherty, Anya Landau French, (both also of the New America Foundation) and long time pro-Cuban propagandist Gail Reed.

Had Clemons delved a little deeper he might have found that Steve and Susan Coll hung around with leftists like Caroline Boss and Rick Cole at Occidental. Many of their friends were involved with Occidental’s “Democratic Socialist Alliance,” which in turn had ties with the radical New American Movement and the Democratic Socialist Organizing Committee – which amalgamated to form Democratic Socialists of America in 1982.

Susan Keselenko took classes with Barack Obama from Prof. Roger Boesche who is also a socialist and a proponent of the radical philosopher John Rawls.

Today Susan Coll is a writer, the author of novels “Rockville Pike” and “KarlMarx.com.”

It seems that the concept of leftist journalists and writers covering their friends is not confined to confirmed “Journolistas.”

The “JournoListas” who helped Barack Obama into the White House are not unique. They are merely part of a movement to promote a promising young leftist that may have begun more than thirty years ago.

Without sympathetic socialist journalists, it is unlikely that Barack Obama would be President of the United States today.