We live in a world dependent on computers; heaven help us when they have a glitch. Sometimes the inconveniences are just that, minor setbacks which can be overcome in a matter of minutes; others take a little longer.

Take for example a story on MYFOXNY dot COM about Ruth and Karl Hess, a couple married for 53 years. A computer error made for an interesting day.

“Ruth Hess got a call from her husband’s doctor’s office telling her that Medicare had declined payment to the doctor. Why? Because they mistakenly thought her husband Karl had died.”

“Ruth Hess said, “That’s strange. We are sitting here having lunch and he just played tennis.”’

“Medicare told the Hess’ that they couldn’t handle trying to prove that Karl was still alive. They referred him to the Social Security Administration.”

The long and the short of it; Hess spent the rest of the day on the phone trying to get someone to accept the fact that he was alive. He had to get through the computer generated phone systems we all look forward to, “For English punch 1, Espanol 2, if you are calling for a problem with billing punch 3, for results of a medical test punch 4, for a chance to win a 60” flat screen television punch 5…”

Eventually it boiled down to one digit of his Social Security number having been entered incorrectly; the computer had declared Karl Hess dead. He was able to convince a human being that rumors of his death were premature.

Several weeks prior to retiring from the Houston Police Department in 1992 I filled out a barrage of forms to facilitate a smooth transition from active duty status so that my insurance and retirement pay would…; stop laughing, I heard that. You guessed it; the system isn’t set up for efficiency. It only took a couple of days for the impact of those forms to take effect.

I was on night shift patrol as I walked out the back door of the station to put my gear in the assigned patrol car for my night’s work. Officers routinely go through preliminary steps of looking the vehicle over for new damage, inventorying the city issued equipment that’s in the trunk, checking for contraband which a previous shift’s prisoner might have ditched in the back seat area and in general making sure everything works.

One of the last things to complete prior to leaving the station was to turn the MDT unit on; that’s the fancy computer hooked up to the police dispatcher’s system. I punched up the screen, filled in the appropriate blanks with my name, payroll number and password. The system sent back a message, “Officer is no longer active.” I got on the radio and advised the dispatcher my retirement didn’t start for another two weeks and would she override the computer and log me into service; amazingly that worked.

At the end of shift I pulled up to the gas pumps to top off the tank as a courtesy to the next shift. There’s a management tool tied into the gas delivery system which keeps track of how much gasoline is pumped into any specific patrol unit and which authorized employee used that gasoline. It was supposed to prevent unauthorized use of the City’s gasoline; filling up a personal vehicle, gas cans and things like that. When I punched in my payroll number the gas pump shut down; the computer screen displayed, “Officer no longer active.”

I walked in the back of the station and explained how I needed to top off and the Sgt. punched in an override code so the officer on the next shift wouldn’t be cussing me for leaving the gas tank empty. The rest of the week was a carbon copy; “Officer no longer active,” wouldn’t let me enter reports online or anything else of importance. I might as well have stayed home for all it was worth; heck, the computer thought I’d already retired.

The last week with the Department had me working the desk; there was no signing on the computer or filling up a patrol car with gasoline. The City really didn’t want a retiring officer getting involved in anything; the desk at the station was the safest bet.

One last bit of information on my preparations for a smooth transition from active duty to retired status; the insurance forms I filled out; that was a waste of time. It took me a month and a half to convince them I hadn’t quit; that I’d retired with full benefits. Thank goodness my family remained healthy during that period; no telling what kind of other problems would have propped up.

Think about the fragile nature of our information systems. Last week there was a “solar tsunami,” the result of an explosion of radiation directed towards Earth. Astronomy buffs were looking forward to enhanced auroras in the northern hemisphere.

“The charged solar particles give Earth’s atmospheric atoms an energy boost, which then gets released as light, producing the shimmering curtains of greens, reds and other colours.”

There are other side effects which may or may not be as welcome; solar activity often interferes with communications. Even Ham radio operators would be rendered useless from electronic interference from such sun spot storm; no telephones no communication.

“Energetic solar storms can disrupt communication and navigation systems, can knock out power grids, and can pose radiation hazards to people working in space.”

The military is aware of “potential for damage” to communications networks and other electronic devices in the event of a nuclear detonation in the atmosphere. Some experts claim such an attack would damage electronic equipment to the point of rendering them useless.

Imagine having every database on every computer wiped clean; financial records, medical records, property recordings and just about any transaction which has been made in the past thirty years gone up in smoke. The power grid would be gone; transportation would be at a stand still since everything depends on electricity.

We live in a world of cell phones, iPads, Droids and Blackberry devices. Folks standing in the grocery check out line, seemingly talking to themselves, actually have little blue lights flashing from a device stuck in their ear transmitting their conversation. Our vehicles have fancy computers to tell the spark plugs when to fire, the fuel pump to regulate the flow of gasoline and instruct the brake pads on how to stop in the most efficient manner short of locking up the wheels. How difficult would it be to throw a monkey wrench into such an electronic dependent society’s fragile inner workings?

Karl Hess wouldn’t be the only one unable to get medical assistance; we’d all be wandering around in the dark. This isn’t to say backup systems are not in place or that paper and pencils couldn’t be used as in days gone by; but oh my, wouldn’t that make a dent at the local McDonald’s hamburger check out? I can see that kid trying to find a picture of a Big Mac so he’d know how much to charge; then asking the customer to make exact change because he never bothered to learn how to add or subtract.

Be of good cheer; I make hard copies of most anything I write just in case the computer crashes and send them off to my folks; they don’t have a computer. Mom and Dad read books, with real paper pages to turn; not from a Kindle or e-book device. When they’re through with one they take it back to the library and check out another; not very efficient is it? I have a book or two as well; not into X-Box games so I have time to read when the Astros aren’t playing.

I was going to include a picture I painted for my folks many years ago. The idea came from the last scene in the movie production of Ray Bradbury’s, Fahrenheit 451. Books had been banned; however, a colony of self-exiled people, far removed from society called the Book People, had taken it upon themselves to memorize a favorite book in order to preserve its content for future generations. The painting showed my lack of talent for painting people; the lake and trees with falling snow was marginally acceptable. Instead I took a photograph of one of our book cases, a chance for you to guess what titles might be included; bear in mind this is but a portion of our collection. 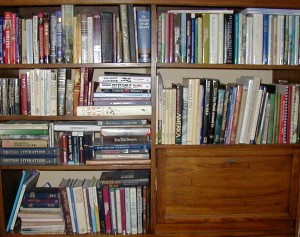 I better get this article posted on the internet before the rains hit later this morning; might knock out the power and all my ramblings will have been wasted. By the time you read this, I might not be here.

The Moral Lib­eral asso­ciate edi­tor, T.F. Stern, is a retired City of Hous­ton police offi­cer, self-employed lock­smith and gifted polit­i­cal and social com­men­ta­tor. His pop­u­lar and insight­ful blog, T.F. Sterns Rant­i­ngs, has been up and at it since Jan­u­ary of 2005.

One thought on “The System Says You’re Not Here”