Fascinating little doco on the Turkish based patriarch of the Orthodox Church.

Despite being headquartered in Constantinople/Istanbul for 1700 years, the Patriarchy is coming under pressure from an increasingly Islamized Turkish state and society.

An excellent post from Eowyn at Fellowship of the Minds…

A reminder of how fine men may be when willing to be guided by conscience and truthful principles.

Could the contrast be starker? 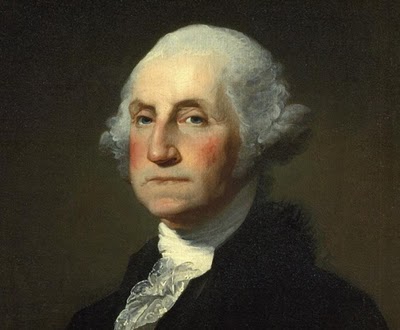 In a letter to Dr. Walter Jones in 1814, Thomas Jefferson, America’s third President (1801-1809), wrote this about the first President of the newly independent United States of America:

“[H]is was the singular destiny and merit, of leading the armies of his country successfully through an arduous war, for the establishment of its independence; of conducting its councils through the birth of a government, new in its forms and principles, until it had settled down into a quite and orderly train; and of scrupulously obeying the laws through the whole of his career, civil and military, of which the history of the world furnishes no other example.”

George Washington was the commander of the Continental Army in the American Revolutionary War from 1775 to 1783. He never used his command for his own advantage. Washington even rebuked his men when they suggested that he become king or that the army assert its control over the civilian authorities. As Commander in Chief, Washington demonstrated his respect for the rule of law by his consistent deference to the elected Continental Congress. When he ended his service at the end of the war, he resigned his commission in 1783 and retired to private life at his plantation in Mount Vernon, thereby proving King George III wrong. George III had asked what Washington would do after the war and was told of rumors that he would return to his farm, prompting the King to state, “if he does that, he will be the greatest man in the world.”

Washington presided over the Philadelphia Convention that drafted the United States Constitution in 1787. Washington was elected the first president, unanimously by the Electoral College, something that has never been repeated in American history.

Washington belonged to no political party and served as America’s first President from April 30, 1789 to March 4, 1797. After two terms Washington thought it was important that he step aside. He believed that a peaceful transition of power to a newly elected president was necessary before his death. He feared that if he died in office and the vice-president ascended to the presidency, it would appear too much like an heir ascending to the throne after the death of a king.

Washington’s farewell address was a primer on republican virtue and a stern warning against partisanship, sectionalism, and involvement in foreign wars. When Washington stepped aside at the end of his second term, George III said that Washington’s retirement from the presidency along with his earlier resignation of Commander in Chief, “placed him in a light the most distinguished of any man living,” and that his relinquishing power made him “the greatest character of the age.”

Washington died in 1799. Henry Lee, delivering the funeral oration, declared Washington “first in war, first in peace, and first in the hearts of his countrymen.” Historical scholars consistently rank him as one of the greatest United States presidents.

Bill Whittle is always excellent. This does not disappoint.

Steven Charleston is Assistant Bishop of the Episcopalian Church of California.

He is a champion of “social justice” and a leader of the Church’s “liberal” wing.

According to the website of San Francisco’s Grace Church:

Steven Charleston is widely recognized as a leading proponent for justice issues and for spiritual renewal in the church in both the United States and Canada. He has been called “one of the best preachers in the Episcopal Church,” leading worship services ranging from a revival style service in Texas to Lenten Services at Harvard University. A citizen of the Choctaw Nation of Oklahoma, Bishop Charleston was born and raised in that state in a family that has had a long history of service in the Christian Native American community. Both his grandfather and great-grandfather were ordained ministers of the Presbyterian Church, serving among the Choctaw People in rural Oklahoma.

His vocation in the church has been extensive and varied. He was the national staff officer for Native American ministries in the Episcopal Church; the Director of the Dakota Leadership Program; professor at Luther-Northwestern Seminary in Saint Paul, Minnesota; the Bishop of Alaska; chaplain of Trinity College in Hartford; Assistant Bishop of Connecticut; and most recently, the President and Dean of the Episcopal Divinity School in Cambridge, Mass.

Steven Charleston has been Chair of the House of Bishops’ Justice, Peace and Integrity for Creation Task Force.

But here is an interesting and little known fact about Asst. Bishop Charleston.

In 1991, Father Steve Charleston, priest at the Holy Trinity/St. Anskar and professor at Luther-Northwestern Seminary in Minnesota’s Twin Cities, accepted an appointment as Episcopalian Bishop of Alaska.

Democratic Socialists of America, the U.S.’s largest Marxist based organization, publishes a journal called Democratic Left. On page 14 of the March/April 1991 issue of this journal is the statement:

“A Native American of Choctaw descent and a self avowed “revolutionary Christian,” [Steve] Charleston was instrumental in reviving the Democratic Socialists of America local in the Twin Cities.” 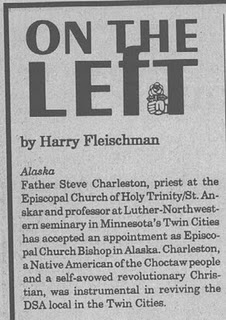 I wonder how many of Steven Charleston’s parishioners, students, colleagues and media contacts, know of the Asst. Bishop’s Marxist background?