Recent polling results would have our attention pulled toward the issue of Obama’s faith; is he Christian or Muslim? The answer would have to be, neither; Obama is a statist and has no faith in anything other than big government, bigger government and eventually total government.

There’s an old lawyer joke which goes, “How do you know when a lawyer is lying? — His lips are moving.” The same holds true for Obama; but it’s no joke and nobody’s laughing. Obama has declared his faith on numerous occasions; his lips were moving but he never said anything worth listening to; these were politically operative phrases intended to mask his identity.

What the pollsters should have asked, had they wanted a better understanding of how the public perceives Obama is: “Does Obama stand for traditional American values?” Or, put slightly differently, “Is Obama’s vision of America compatible with the vision our founding fathers had for individual liberty and freedom?” The answer would have to come back: “No, Obama is a statist and by definition, his belief in social interaction excludes faith in anything but the all powerful state.” 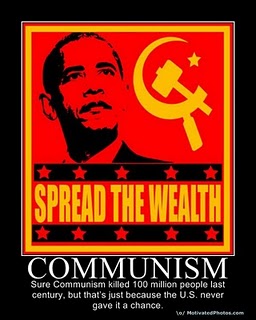 I received an email which supposedly was a partial transcript recorded during an interview on Meet the Press on September 7, 2008; information intended to nail Obama regarding his anti-American mindset. As much fun as it would have been to share, according to my search results Obama wasn’t on Meet the Press on September 7, 2008, Joe Biden was; so there’s no telling what asinine things were said.

There’s no need to make up stuff. Obama’s actions speak louder than words. Under his administration and with the help of a ‘progressive’ (Socialist) Congress, our country has been fast-tracked toward destruction. Obama has made it a point to dismantle our national defense and enter into treaties with our enemies under the infantile assumption that by doing so the world will be a safer place. Obama has shown a reluctance to salute or even observe a modicum of respect for our flag during various ceremonies leading many, including myself, to wonder if he really does hate what our flag stands for. While on trips to foreign nations Obama apologized for America’s success, claiming we’ve taken advantage of our powerful position and imposed on less powerful nations.

Maybe Obama saw a need to apologize for America imposing our great influence in France when they were occupied by the Third Reich. We probably had no business imposing freedom in other areas of the world; Iraq comes to mind for some reason. Democracy is terrible to impose on others and most folks in the Middle East would rather live under Sharia law. You believe that, right?

“Muslim or Islamic law, both civil and criminal justice, as well as regulating individual conduct both personal and moral. The custom-based body of law based on the Quran and the religion of Islam. Because, by definition, Muslim states are theocracies, religious texts are law, the latter distinguished by Islam and Muslims in their application, as Sharia or Sharia law.”

Sharia is incompatible with America’s republican form of government; but that is not the path which Obama is taking us down and really not the topic of today’s article. While the media keeps their ratings up with a red herring on religion and 1st Amendment gobbledygook related to building a mosque close to Ground Zero; Marxist policies intended to derail our free market system and individual liberties are being implemented nearly as fast as the ink dries on legislation intended to deceive, manipulate and destroy America.

Obama is a statist and the ‘change’ which he intends for America is away from individual God-given rights protected through constitutional restrictions on government. Obama’s inner circle of friends and mentors are for the most part anti-American Marxists who are pushing for wealth redistribution via entitlements. His agenda is based on the lie that all wealth is to be shared equally regardless of individual desires, needs or supposed rights. In short, Obama is neither for Islam nor is he for Christianity as both claim to have authority outside of and above powers he intends to be held by the state alone. 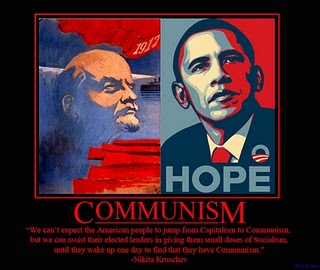 Do you feel comfortable having a Marxist in the White House or would you rather return to government of the people and by the people based on constitutional rule of law? November is just around the corner; choose carefully. Presently the path we are on is filled with treachery, lies and deceit. We need to restore gridlock in order to stop this insanity.

ShoreBank of Chicago Said to Be Closed Today by FDIC

15 Signs The U.S. Housing Market Is Headed For Complete And Total Collapse

Jim Rogers: If You Want Your Family To Be Silly Rich In The Future, Then Leave America And Move To Asia Now

CHART OF THE DAY: How To Blow A Bond Bubble

Nobody Wants To Bail Out Newspapers, Especially Not Readers

Housing Has a Home Without Fannie, Freddie: Caroline Baum

A Year After Claiming Economy Was His… Obama Blames Bush Again

Unreal… Obama Knew Gulf Drilling Moratorium Would Cost At Least 23,000 Jobs But Went Ahead With It Anyway

Obama: We Must Stop the Corporate Takeover of Our Democracy

When Will Financial Armageddon Begin?

Accountability and Transparency in the World of Big Money: Too Big to Fail and Too Big to Jail