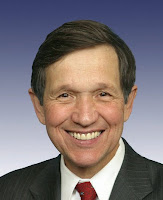 Voters in Ohio’s 10th District are well aware that their Congressman Dennis Kucinich is way, way out on the left.

After all he is a member of the far left Congressional Progressive Caucus.

Few realize however, that Dennis Kucinich is allied to members of the Communist Party USA, a party with more allegiance to China and Cuba than to the United States of America.

Check out this official Kucinich ad from his brief 2008 presidential campaign.

The video doesn’t say so, but Bruce Bostick is no ordinary steelworker. He is a veteran of the 1969 Venceremos Brigade to Cuba and a long time Ohio and national official of the Communist Party USA.

So why would a Democratic Congressman officially accept the endorsement of a Communist Party leader?

Unfortunately, for Dennis Kucinich, this is simply par for the course.

Dennis Kucinich has reportedly been close to the Communist Party USA since his days in Cleveland Ohio council politics in the 1960s.

According to the World Socialist Web Site:

Take Kucinich first. As mayor of Cleveland in the late 1960s, he represented one of the most “left” elements in the Democratic Party during the heyday of the radical protest movement. He was closely allied with the Stalinists of the CPUSA, who still had significant influence in the working class of Cleveland, particularly in such unions as the UE and UAW. With the collapse of the protest movement and the shift to the right in American bourgeois politics, Kucinich was driven out of political life for two decades, before returning to office as a state legislator and ultimately winning a congressional seat

During Kucinich’s successful 1996 Congressional run, there was considerable controversy over his ties to Communist Party USA member Rick Nagin.

The election of Dennis Kucinich in Ohio’s 10th Congressional District was a ground-breaking event demonstrating the powerful political potential of a mass, grassroots coalition led by labor.

Trade unionists and seniors provided the largest numbers of some 5,000 volunteers but many others came from Hispanic, environmental, peace and other organizations.

The Republicans reacted with fury to this open challenge to their decades of labor-baiting bully tactics. Kucinich’s program, Republican county chairman Jim Trakas announced, is “very similar to the Communist Manifesto” and is “what Lenin stood for.” Kucinich blasted this reversion to “McCarthyism.”

The smears were endlessly propagated by a right-wing talk show host who made it his mission three hours every morning to stop Kucinich. The poisonous attacks, aimed at suppressing voter turnout, caused the race to tighten considerably. In the final week before the election the focus of the Hoke campaign shifted to virulent red-baiting directed at this writer.

In what was probably a first since the beginning of the Cold War, Kucinich refused to knuckle under, calmly stating that I was one of 5,000 volunteers and declaring, “It’s Halloween and Hoke is dressing up as Joe McCarthy. Karl Marx is not running my campaign but apparently Harpo Marx is running his.”

In 2005 Rick Nagin campaigned unsuccessfully in his own right for Cleveland City Council and was heavily criticized over his Communist Party ties. Nagin had resigned as chairman of the Ohio Communist Party (but had remained a member) to take a position as executive assistant to Nelson Cintron, the first Latino in the City Council and a protege of Kucinich’s.

According to the People’s Weekly World:

Nagin was continuously targeted as a member and former chairman of the Ohio Communist Party, yet his strong showing was impressive and stemmed from a number of factors….

Nagin also had seven and a half years of experience as executive assistant to Nelson Cintron Jr. who represented an adjacent ward. Furthermore, he had been a key organizer for Dennis Kucinich’s campaigns for Congress and president and for the 2004 John Kerry presidential campaign

The Communist Party USA appears to see Dennis Kucinich as a man worthy of support and someone who can be relied on to push the correct agenda in Congress.

In a 2004 report to the CPUSA National Board, the Party’s Political Action Committee chair, Joelle Fishman wrote a report on Party work in the U.S. Presidential elections. She included a comment on Dennis Kucinich and the Democratic Party National Convention.

Dennis Kucinich’s 50 delegates to the national Democratic convention, will be presenting a platform plank for a Department of Peace, voted favorably by four state conventions, including dramatically in Texas just this week. The efforts of Kucinich together with Jesse Jackson and others, to bring forward more advanced demands, will make an important contribution to the convention. A very special contribution will be made by an expectedly large number of labor union delegates who will work together in one bloc to get a strong platform for jobs, health care, and pensions.

The Communist Party USA would also be at the convention:

We project our role at the convention as distribution of the Peoples Weekly World/Nuestro Mundo and literature to delegates and in free speech areas, and participation in the Kucinich-led issue events.

Finally, we should have a positive attitude toward the candidacy of Congressman Dennis Kucinich. Despite the efforts of the media to sideline him, Kucinich is emerging as a leading voice of the broad people’s coalition. He brings consistent anti-right, anti-corporate, pro-peace positions to the presidential primaries and debates. None of the other candidates can make the same claim. The more he speaks to audiences of the core forces, the better positioned the movement will be to win in 2008 and to fight the good fight in 2009. 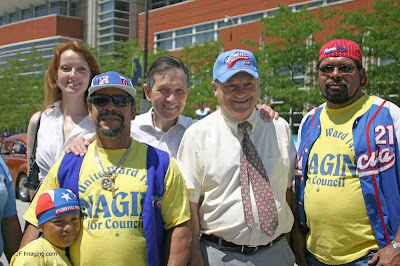 Dennis Kucinich, (center rear), endorsed Rick Nagin (second from right) in his almost successful 2009 City Council race. While Nagin stood as a Democrat, he is still unequivocally a leading member of the Communist Party.

I’ve known Rick Nagin for more than 30 years. He’s honest, hard-working and conscientious. The people of Ward 14 have a chance to elect a Councilman who will be totally dedicated to them. What more can you ask for?

I’m proud to join with the AFL-CIO in supporting Rick Nagin.

Perhaps the voters of Ohio’s 10th District should reflect on whether they would still vote for Dennis Kucinich if he were running as a member of the Communist Party.

Because if they wouldn’t vote for an open communist, why would they vote for a man who is almost certainly a Communist Party supporter?

3 thoughts on “Dennis Kucinich and the Communists”