The U.S.’s largest Marxist organization, Democratic Socialists of America, is about to further strengthen its hold on the country’s most influential labor union – the SEIU.

After the recent resignation last week of Secretary-Treasurer Anna Burger, SEIU president Mary Kay Henry, announced her intention to nominate Executive Vice President Eliseo Medina to Burger’s former post, the second highest in the union, at SEIU’s next board meeting in Los Angeles.

This move will almost certainly intensify D.S.A.’s use of SEIU as a tool to push “immigration reform.” A program primarily designed, by Medina’s own admission, to bring 8 million more Latino voters to the Democratic Party. 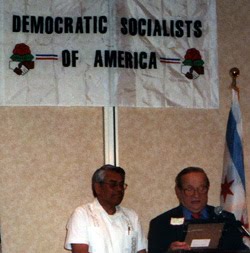 Eliseo Medina is a long time leader of Democratic Socialists of America.

An SEIU executive vice president since 1996, Medina is the labor movement’s foremost champion of “immigrant rights.”

In 1999, he spearheaded the successful campaign to get the AFL-CIO to reverse its long time opposition to immigrant workers. Over the past 15 years, he has also conceived and coordinated SEIU’s efforts to naturalize, register and turn out the votes of new immigrants in California — a campaign that helped turn America’s largest state solidly Democratic — and has recently been involved in similar campaigns in Southwestern states.

Medina also was a key negotiator on behalf of labor in the immigration-reform deliberations with the Bush administration, a leader in Hispanic voter mobilization efforts for long time D.S.A. associate Barack Obama in 2008 and one of the foremost advocates for comprehensive “immigration reform” during the past two years.

As a union that represents the largely immigrant janitors in the downtowns of many of the nation’s largest cities, SEIU has played an outsize role in the immigration battles of the past 15 years. Medina has functioned externally as the union’s leading public spokesperson on the issue and internally as its chief strategist and advocate for stepped-up involvement. At the board meeting this June where Henry was elected president following the resignation of long time President Andy Stern, the union, at Medina’s behest, committed itself to fund and wage the kind of registration and get-out-the-vote campaign in Arizona that Medina had headed up in California. The campaign that Medina has put together in Arizona mobilizes SEIU and eight other groups, employing 40 full-time canvassers to turn out roughly 120,000 Hispanic infrequent voters this November.

Medina’s nomination was quickly seconded on Friday by Executive Vice President Gerry Hudson, (also a long time D.S.A. member) who has replaced Burger as the head of SEIU’s political operations. “A strong advocate of social unionism concerned with issues of race and gender as well as class, Hudson noted that Medina was a kindred spirit.” Medina’s ascension, he wrote, “will signal to our members and to the outside world our commitment to social justice and comprehensive immigration reform.”