From: The Black Robe Regiment

The Chicano Moratorium brought together 30,000 people – mainly from the Mexican American communities in the Los Angeles area – to protest the Vietnam War and “racism towards people of Mexican heritage.”

In many ways this was the birth of the modern Chicano rights movement, now so prominent in the the illegal immigration debate.

The movement was guided by Communist Party USA members like Bert Corona and Alinsky-inspired socialist sympathizers like Cesar Chavez and Dolores Huerta.

The following is an interview of Chicano Moratorium leader Rosalio Munoz about the significance of the Aug. 29, 1970 protest, then and now. Munoz is now chair of the Communist Party’s Mexican-American Equality Commission, the Party body charged with organizing Latino protest movements, voter registration drives and delivering the Mexican-American vote to the Democratic party. 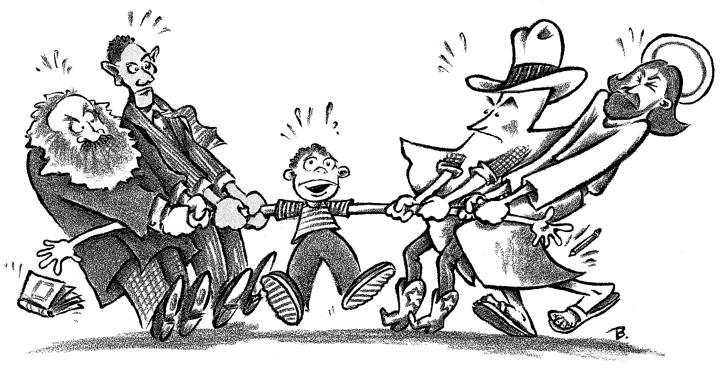 [This is Part III of a five-part essay; if you haven’t yet seen them, first read Part I and Part II.]

While the media generally goes into hysterics every time the Texas State Board of Education meets, with commentators hurling mockery, outrage and vitriol at the board members, there is a total lack of interest when other states’ boards of education meet for the same purpose. Yet Texas is not the only state that influences the content of American schooling: a few other states also determine textbook standards that end up being used in other parts of the country. California, in particular, is also an important textbook market for publishers. Yet mysteriously, one never hears of any controversy erupting when the California State Board of Education meets to decide the content of textbooks used throughout the state and in many other school districts around the country which shun the Texas-approved textbooks.

Why is that? Could it simply be that California-approved textbooks aren’t as politicized as those in Texas?

Quite the contrary. If anything, the textbooks approved by the California State Board of Education are even more politicized than Texas textbooks, and more ideologically biased. So: Why does the media ignore what happens in California textbooks? Because the state’s bias goes the other way. California-approved social studies textbooks are politically correct in the extreme, with multiculturalism and “social justice” as the defining characteristics. The pressure groups and board members setting policy for California’s (and hence a substantial portion of America’s) textbooks exceed their Texan counterparts in their extremism, but since California pushes the “correct” kind of extremism, you never hear about it.

And I’m not just talking about overt political bias, as exemplified by the previously-mentioned A People’s History of the United States and countless similar study materials with a blatant left-leaning slant. I’m talking about a subtler form of indoctrination.

Read more of this incredible article at Pajamas Media…

Half of Your Taxes Will Go for Interest Under Obama

Economics and Wars and Religion. Oh My! (Hat Tip: Larwyn)

Proof: Democrats at Fault for the Recession (Hat Tip: Larwyn)

The Macro Picture Is Deteriorating: Here’s What’s Going On

Face It, Nobody Is Bullish Anymore

Raise Money Now. There Are Storms Ahead

How To Read Today’s Japan Massacre

Bernanke Out Of Bullets But Not Bombs (Hat Tip: Jean Stoner)

Which party is the fat cat party?

What If We Ditched Quantitative Easing and Just Printed (And Distributed) Cash?

Deutsche Bank: Sorry, The June Gains In The Case-Shiller Will Be Short-Lived

Tax Cuts That Make a Difference

A list of foreign Mosques being funded by US Taxpayers (with cost details) (Hat Tip: Jean Stoner)

Some can’t afford the cost of being homeless in Orlando (Hat Tip: Jean Stoner)

Its Official: China is Unloading its Treasury Bonds

John Williams of ShadowStats Says Economic Data Will Get Much Worse.

Ron Paul questions whether there’s gold at Fort Knox, New York Fed. To clarify, part of his concern is that physical gold may indeed be stored there, but that it might actually belong to other parties!

Government Set to Confirm What Many Feel: Economy at a Standstill

Snapshot of an Economy About to Get a Lot Bleaker

US Warned by S&P its AAA Credit Rating at Risk

101 Ways to Save Money on Health Care