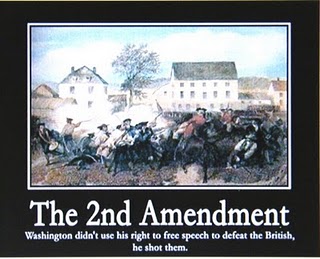 Americans can’t be trusted with guns; at least that’s what many are reading into Obama’s cancellation of a deal in which Korea wanted to sell 87,310 M1 Garands and 770,160 M1 Carbines as collector’s items to individual American citizens. Korea could sell the weapons without any issue were it not for the fact that our government originally gave them away in the first place; it’s okay to give them to a foreign government, just American citizens can’t have them.

“A State Department spokesman said the administration’s decision was based on concerns that the guns could fall into the wrong hands.”

You can read anything or nothing into such a statement; but there’s a pattern developing which would lead a reasonable and prudent person to believe the Obama administration would rather American citizens not indulge in 2nd Amendment constitutionally protected God-given rights. Why else ban the sale of a weapon which could otherwise be purchased? These firearms are considered collector’s items and are some of the best examples of weaponry ever made. Thank you President Obama for showing where you stand on American values.

“The Obama administration approved the sale of the American-made rifles last year. But it reversed course and banned the sale in March – a decision that went largely unnoticed at the time but that is now sparking opposition from gun rights advocates.”

Wasn’t that about the same time the Obama administration did a hundred and eighty degree change on United States policy when it sent Secretary of State Hillary Clinton to endorse the United Nations gun confiscation treaty? This administration has shown contempt for the rule of law and the constitution at nearly every step of the way; the right to own and bear arms stands in their way of totally enslaving the citizenry. 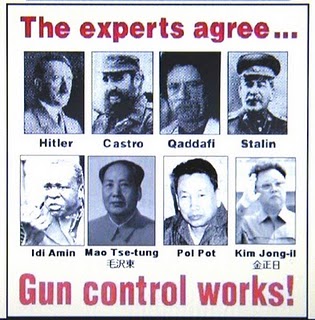 If you want that translated, “We don’t have a really good reason other than we don’t want American citizens to own top quality weapons; guns are evil. It’s on our agenda, a thing Obama and most progressives want to implement without having a leg to stand on until we have enough votes on the Supreme Court to make the constitution disappear.” 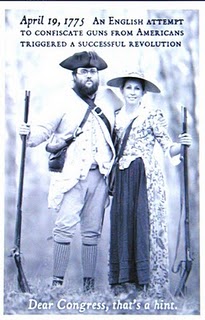 These posters came my way via email. I hope the message comes across loud and clear; keep your ‘cotton picking’ hands off my 2nd Amendment right to own and bear arms. 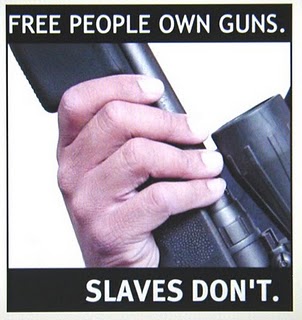 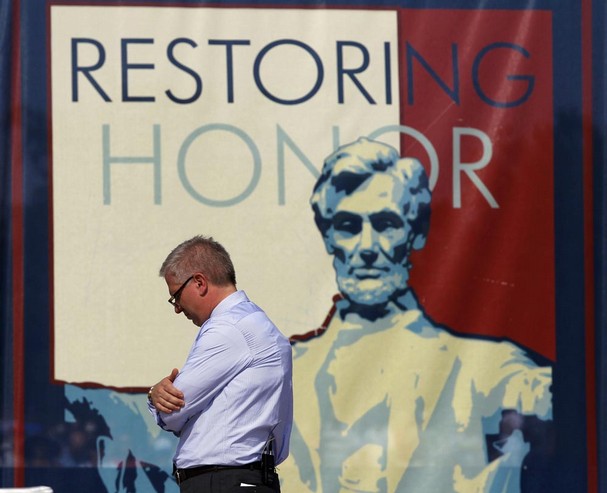 He is aiming far beyond what most people consider to be the goalposts.

Beck sees correctly that the Conservative movement had only limited success because it was good at level 1, for a while, weak on level 2, and barely touched level 3. Talk Radio and the Tea Party are level 3 phenomena, popular outbreaks, which are blowing back into politics.

Someone who asks what the rally has to do with the 2010 election is missing the point.

Beck is building solidarity and cultural confidence in America, its Constitution, its military heritage, its freedom. This is a vision that is despised by the people who have long held the commanding heights of the culture. But is obviously alive and kicking.

Beck is creating positive themes of unity and patriotism and freedom and independence which are above mere political or policy choices, but not irrelevant to them. Political and policy choices rest on a foundation of philosophy, culture, self-image, ideals, religion. Change the foundation, and the rest will flow from that. Defeat the enemy on that plane, and any merely tactical defeat will always be reversible.

He references some Reagan observations to provide more context…

Ronald Reagan said we would not defeat Communism, we would transcend it.

As Ronald Reagan also said, there are simple solutions, just no easy solutions.

Oh, and it seems his assessment is accurate:

Whoa. Mr Beck himself linked to this post, and tweeted: “The ONLY guy to actually get it!”

It would appear that he’s playing the long game, but his approach may yield near-term results.

10 American Cities That Are Dead Forever

David Rosenberg: Here’s 5 Signs That The Economy Began The Double Dip In Q3

Your Treasuries Are Getting Routed After Today’s ISM

Oregon’s Tax On The Rich Came In Short, While Unions Just Got A Pay Raise

How Fed Rigs the Economic Debate

Karzai’s brother calls for U.S. to shore up Kabul Bank as withdrawals accelerate

DC Begins the Bust Up

Oil Should Be Around $10 a Barrel: Analyst (Hat Tip: Jean Stoner)

Unions Gear Up to Support Dems in November

Wyden: For imposing the Obamacare individual health mandate before he was against it

The Most Fiscally Irresponsible Government in U.S. History

Blockbuster to File for Bankruptcy in September

Record 1-in-6 Getting Government Aid

Jobs Data to Show Severity of Economic Malaise. Wells Fargo: ‘Our view is that the recovery is petering out, not sliding into a double dip’

You’ll pay 6 to 7% more this weekend for your steak and hamburger.

Doomsday Scenario: Food Prices to Shoot Through the Roof.

Read One Second After…

From: The National Inflation Association

The pain that was felt after the collapse of Lehman Brothers is nothing compared to the pain that will come when we begin to feel the effects of bailing out the rest of Wall Street. U.S. second quarter GDP growth was revised down on Friday from 2.4% to 1.6%. In order to get this 1.6% GDP growth, the U.S. government had to spend $3.7 trillion on bailouts, stimulus bills, the buying of mortgage backed securities and other commitments.

General Motors reported today that their August deliveries fell 25% from one year ago to 185,176 vehicles. The U.S. government used “cash for clunkers” to buy GDP growth in 2009, but that growth stole from future automobile sales. NIA believes that GM’s sales decline is a sign that the U.S. will likely see a sharp contraction in GDP beginning in the third-quarter, which will lead to the Federal Reserve implementing the mother of all quantitative easing and cause a massive sell off in the U.S. dollar.

Christina Romer, outgoing Chairwoman of Obama’s Council of Economic Advisers, today called for more government spending and less taxes as a way to bring down unemployment. The combination of more government spending and less taxes equals massive inflation, but this represents the state of mind in Washington today. Inflation is still the last thing on their minds because they don’t see it yet.

Even though we might not see massive across the board price inflation at this time, gold and silver prices have been surging ever since NIA released its article “Gold and Silver Capitulation is Near” on July 28th. Gold is very close to breaking its all time nominal high of $1,264.90 per ounce set during June and silver is getting ready to test the critical $20-$21 per ounce resistance level.

Rising gold and silver prices indicate that the U.S. is headed for an explosion in budget deficits that will rise far beyond what it can pay for through borrowing. Leading Chinese economists are now calling Japanese debt less risky than U.S. debt and with the Japanese savings rate in decline, the U.S. will soon have nobody left to borrow from. The only option will be monetization and already the Federal Reserve is getting ready to buy $10 billion to $30 billion per month in U.S. treasuries to keep its balance sheet at inflated levels.

There are now 50 million Americans on Medicaid, with annual Medicaid costs rising 36% over the past two years to $273 billion. The recently enacted health care bill will add 16 million more Americans to Medicaid beginning in 2014, but the U.S. government will likely go bust by then. It is impossible to have an economic recovery when jobless benefits are encouraging Americans to stay unemployed. U.S. unemployment insurance spending has nearly quadrupled since 2007 to $160 billion annually. Even food stamp costs have surged 80% over the past two years to $70 billion annually.

Once Americans get used to receiving and relying on government entitlement programs, it is hard to wean them off of them. NIA has been hearing reports from members with friends who say they will only “come out of retirement” if they can find a job that pays $25 per hour or more, because with anything less it wouldn’t be worth losing their jobless and food stamp benefits. Americans expect to receive their jobless benefits forever and we are sure Obama will continue to extend them leading up to the 2012 election.

There are now countless warning signs all around us on a daily basis that the U.S. is headed for a complete societal collapse. NIA received an overwhelming response from its members when we asked you to submit any signs you see that a societal collapse is near. The response we received was so strong that we are now beginning to produce a documentary about America’s upcoming collapse of society. The documentary will be over an hour long and we are hoping to release it by the end of October. It will go beyond the economic facts and statistics that were discussed in ‘Meltup’ and help expose the upcoming collapse from a real life perspective. NIA believes this documentary will appeal to a very mainstream audience and help open up the world’s eyes to the truth about the path this country is on.

Please spread the word about NIA and have your friends and family subscribe for free at: http://inflation.us

A reader sent through the following article. I think if we can get through the next few years, we have a bright future ahead of us…

How Darwinism will create a conservative dynasty in America

For a glimpse of a nation’s future, said Phillip Longman in Foreign Policy, pay a visit to Seattle and Salt Lake City. Seattle, a city of highly educated progressives, ” has 45 percent more dogs than children.” Traditional Salt Lake has “19 percent more kids than dogs.” It’s a striking pattern, found throughout the U.S. and Europe — and it will have profound implications for what kind of societies we’ll leave for our ancestors. Fertility is now highly correlated to political and religious beliefs. The more progressive and secular you are, the less likely you are to have a big family; the more conservative and religious you are, the larger your family is likely to be. In religious Utah, for example, the birth rate is 92 children for every 1,000 women, the highest in the nation. By contrast, highly progressive Vermont — the first state to embrace gay unions — has the country’s lowest fertility rate, just 51 children per 1,000 women. “Among states that voted for President Bush in 2004, the average fertility rate is 12 percent higher than the rate of states for Sen. John Kerry.” Almost 20 percent of American women who came of age in the countercultural 1960s and ’70s are approaching the end of their fertility cycles without reproducing, meaning that millions of progressive feminists are bequeathing “no generational legacy.” Whether you like the implications of these numbers are not, the trend is clear: We’re headed for “a far more conservative future, one in which patriarchy and other traditional values make a comeback, if only by default.”