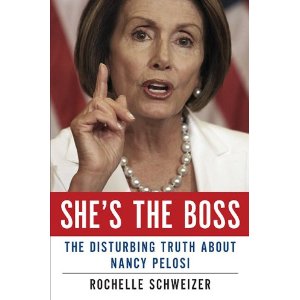 Recently, I picked up a copy of She’s The Boss – The Disturbing Truth About Nancy Pelosi by Rochelle Schweizer. This is a riveting expose on one the most power hungry, brutal female politicians of all time and as you will see after reading the book, it runs in her family. The Speaker of the House, Nancy Pelosi, is no retiring, kind and meek grandmother. She is made of Baltimore steel and she has been forged in the boiling corrupt vat of politics in a never-ending quest for power and status that she feels is her birthright.

Pelosi came from a family that bears a striking resemblance to organized crime. She will ruthlessly use and discard any one in her way or who will forward her agenda. She rules the House with an iron grip and she is simultaneously feared and hated by most politicians. Those who claim to support and adore her are sycophants that are in the DC game for money, power and prestige. Her minions are made all the more dangerous due to Pelosi’s powerful reach and thuggish policies. No radical agenda is too outrageous if she deems it worthy. Pelosi’s hypocrisy knows no bounds and she feels no shame.

An elitist’s elitist, Pelosi is cunning in the extreme. Her entire political career has been virtually choreographed and painstakingly planned. You won’t hear apologies from her and most likely, you’ll never see the attack coming if you are in her sites.

Pelosi’s vision for this country is horrific. Instilling Marxism and power for the elite, she envisions an America under her gavel and powerful oversight. Americans will be condemned to poverty and slavery to the state if she has her way. She will not be stopped unless Americans stop her tyrannical rule and the hideous progressive policies she pushes forward. She has risen to the most powerful position held by a woman ever, simply by scaling the political ladder and she is far from finished.

I am currently doing thorough research on Pelosi and this book is a wonder – it will be added as a listed documented tool that has added incredibly to our piles of information on Nancy Pelosi. I would recommend every American read She’s The Boss. Then go over to KeyWiki and read our research on Nancy Pelosi. It is my opinion, that next to Cass Sunstein, she is one of the most dangerous idealogues in our government and evil as a descriptive term, just doesn’t do justice to Pelosi’s agenda.

Rochelle Schweizer presents compelling evidence that Speaker Nancy Pelosi is a political boss operating on overdrive and has turned her House into a corrupt institution by pulling the levers of political power for her benefit as well as that of her allies.