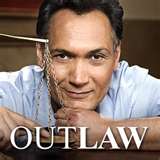 Friday night and all I wanted to do was watch a little television before bed to wind down. We’d already watched everything recorded on the DVR and I didn’t want to start a movie that I would fall asleep half way through… So, I turned to the great American pastime of channel surfing.

I know better than to watch NBC – I really do. I swore off them after they blatantly propagandized Law and Order where they would run cheap attacks on anything conservative as if Americans actually would believe their Marxist viewpoints that would have made Goebbels proud. I cursed them verbally and mentally when they pushed the Al Gore insanity and when they started selling Obama paraphernalia like the Chinese sell Mao trinkets. But, I have always enjoyed Jimmy Smits since I first viewed LA Law and I saw the summation of the new show ‘Outlaw’ in passing which caught my interest. Going against my better judgment, I turned it on and the hubby and I settled in to watch.

Well that didn’t work out well… Within about 2 minutes, I was pausing the show and yelling, “Oh, come on!” Then my ranting began and I threatened to turn it off. My husband wisely pointed out that we needed to see what the enemy was doing, so I forcefully calmed myself down, gritted my teeth and stiffened my spine to watch one of the most propagandic shows I have ever had the displeasure of watching.

First off… Smits is a gifted actor and the whole written plot is beneath him and totally implausible. Especially from a legal and judicial point of view. Jimmy needs to distance himself from NBC – this is not the new LA Law.

Within the first few minutes, you learn that Smits is a Supreme Court Justice by the name of Cyrus Garza. He is portrayed as an uber-conservative justice who swings many 5-4 votes on cases in favor of conservative issues. He glibly claims to be “Switzerland” in his neutral stances.

You then find out that his father passed away in an accident which Cyrus survives. Daddy was a Marxist through and through it turns out. He was a big Cesar Chavez fan. He believed in every liberal cause out there and NBC blatantly bullet points those issues which we will get into shortly. Cyrus starts having warm and fuzzy thoughts about his father and how opposite they were. When presented with a case where a stereotypical black convict is portrayed to be innocent of murder (not all the other crimes he committed which were numerous), Cyrus decides to defend the underdog and resign as a justice.

His late father, also a jurist, favored more liberal rulings. Father and son often disagreed vehemently on issues. Despite the fact that he and his father were on opposite sides his entire adult life, all it takes for Smits to swing to the other way of thinking is a DVD of his father saying, “(Cyrus) is wrong and deep inside him he knows it.” Suddenly, he morphs from Antonin Scalia to Ruth Bader Ginsburg.

Cyrus’ team includes a blond whom he tells us is a liberal elitist – which is a good thing, a conservative Harvard attorney – which is a bad thing – but he is convinced of the error of his ways and reluctantly joins the crime fighting team, a young black attorney who is extremely liberal and whose wife calls Cyrus’ a fascist before he has his conversion and a private investigator who is a radical, bi-sexual feminist dressed like a hooker. We’re saved…

They get the convict off on a technicality using the judge’s precious decision against the judge presiding (this would never happen) and go on to list other causes they will address: illegal immigration (next week) where a Hispanic is persecuted by an evil white cop, gay marriage in California and euthanasia in Oklahoma I believe… Social justice is touted right at the beginning of the show as the good and right belief system, implying that anyone against it is, well, just evil… It was pushed so hard, it would have sent a thrill up Jim Wallis’ leg I’m sure.

Have you ever heard of the Judiciary Reorganization Bill of 1937? FDR tried to used this to add more justices to the Supreme Court to pack it in favor of his agenda. It was his way of bypassing the judiciary arm of government. Some may think ‘Outlaw’ is just a harmless show… I think it is the first volley for Obama in a propagandic attempt to bypass the judiciary arm of the government by making them seem biased and against the common man. NBC has been in bed with the Obama administration from the beginning.

Take for instance the fact that Cyrus, the uber-conservative justice on the court, is portrayed as being a gambling, immoral skirt-chaser. This is an attempt to highlight the fact that conservatives are hypocrites who claim to take the high road, while debasing themselves just as everyone else does. This cliched reference is followed by a conservative senator threatening Cyrus’ life if he does not vote for the death penalty and Cyrus telling him in essence to bring it on. Even the opposing attorney was picked for his Karl Rove-like looks. The whole theme of the show is so blatant, it’s almost epic in it’s twisted Marxist message.

Instead of being a maverick outlaw, thumbing his proverbial nose at the establishment, ‘Outlaw’ comes off as just another lame attempt by Hollywood elitists and this administration to show America the rightness of their agenda and how awful those eeeevvviil conservatives are. I feel a cancellation coming on for this show as it unceremoniously rides into the red, Marxist sunset and the dustbin of history.