The Communications Assistance to Law Enforcement Act, signed into law in 1994, does not apply to communication service providers like Research in Motion (RIM), maker of BlackBerry devices. According to an article on the Fox website, the U.S. wants broader Internet wiretap authority because, “National security officials and federal law enforcement argue their ability to eavesdrop on terror suspects is increasingly “going dark;” they are incapable of intercepting and decrypting messages as with other systems.

“The Obama administration is developing plans that would require all Internet-based communication services — such as encrypted BlackBerry e-mail, Facebook and Skype — to be capable of complying with federal wiretap orders, according to a report published Monday.”

On the surface, such a mandate might appear reasonable. However, there are ways to obtain the information which currently is considered a threat to national security. Instead of requiring encrypted communications servers downgrade their product to make it easier to listen in on clandestine conversations, a court order would be directed to the service provider, such as RIM, to open their records on specific conversations, with a properly obtained search warrant, as has been done in other countries.

“RIM has recently been working to resolve disputes with India, the United Arab Emirates and other countries to avert threats to ban BlackBerry services. The countries complained that BlackBerry e-mail encryption posed a national-security risk. India postponed a ban for at least two months after RIM agreed to give security officials “lawful access” to data.”

If you’re paying attention, the important part had to do with “lawful access.” In other words, “Show me a warrant properly signed by a FISA judge, with all the blanks filled in, and we’ll hand you the information requested. Not only will we hand it to you, it will already have been deciphered into readable text.” Exactly where is the need to expand government’s wiretap authority?

That brings me to another concern, one which goes much further than whether or not our government should be listening in on conversations under an all-encompassing national security guise we call the USA Patriot Act. While supported by many as a reasonable step following 9/11, the USA Patriot Act earned that support under the naive delusion of always having a president and/or government which could be trusted to use such enormous powers only against real enemies of this nation.

At what point do such powers become a tool used for political purposes, keeping tabs on dissenters rather than rooting out real terrorists? At what point is the line blurred where political dissent becomes an act of sedition or having a conservative view equates with terrorism? When “We The People” fear our own government, that line in the sand has already been crossed.

I read an email account entitled, A Holocaust Survivor’s View on Islam, by Dr. Emanuel Tanay, regarding how various evil regimes in world history had been ignored by their own silent majority.

Islam, the religion of peace, has been taken over by fanatics intent on destroying anything and anyone in their way while the silent majority of peace loving Muslims are incapable of stemming the tide. According to Tanay it doesn’t matter if the silent majority isn’t directly involved with murder, bombings and beheadings; they are culpably guilty through their inaction. Tanay went on by detailing NAZI Germany’s atrocities which included the extermination of Jews, Communist Russia murdering 20 million of its own citizens, Chinese Communists murdering a staggering 70 million and the list went on; all the while their silent majority stood back and could only watch in horror.

Tanay summed up his thoughts with a warning:

“History lessons are often incredibly simple and blunt, yet for all our powers of reason, we often miss the most basic and uncomplicated of points:

Peace-loving Muslims have been made irrelevant by their silence.

Peace-loving Muslims will become our enemy if they don’t speak up, because like my friend from Germany, they will awaken one day and find that the fanatics own them, and the end of their world will have begun.”

Putting these ideas together leads to today’s thoughts regarding the “Dark Side.” A majority of Americans acknowledge an unsettled feeling as we observe our government today. Far too many Congressmen and Senators see no problem with legislation being worked out in the shadows or under the table in ways that hide their content from “We The People.” Thanks to Obama, there are advisers to the highest office of the land outside the approval of Congress. Czars who are avowed enemies of our republican form of government and our constitution who literally have stated they seek to dismantle it “brick by brick.” I could be mistaken, but it’s my opinion; Fanatics have already seized control of our government. That unsettled feeling we’ve felt is a warning to act. Silent majorities soon become enslaved and incapable of action.

America still has time. We need to wake up and take notice of the “not so subtle” changes taking place in our government. Changes which could easily be interpreted as the end of our world. Come November, let’s be wide awake!

The Moral Lib­eral asso­ciate edi­tor, T.F. Stern, is a retired City of Hous­ton police offi­cer, self-employed lock­smith and gifted polit­i­cal and social com­men­ta­tor. His pop­u­lar and insight­ful blog, T.F. Sterns Rant­i­ngs, has been up and at it since Janu­ary of 2005.

Language warning… The truther reference made me raise my eyebrows, but that aside – this is atrocious. Some say it is just clip art. Well just how incompetent can a school be? No one noticed this? Unforgivable. 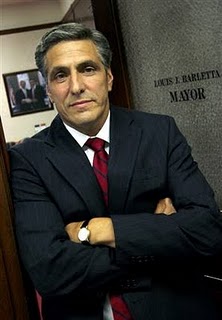 Lou Barletta, mayor of Hazleton, Pa, will be Andrea’s guest this evening. Mayor Barletta is running for congress in PA’s 11 district and is up against a 13-term incumbent. The latest polling shows Barletta leading his opponent.

Mayor Barletta rocketed to national fame with his strong stance on illegal immigrants in the city of Hazleton; a stance that brought with it attacks from all sides. Today, illegal immigration is just one of the important issues that must be dealt with, and tonight Andrea will be covering some of those issues with Mayor Barletta.

U.S. Tries to Make It Easier to Wiretap the Internet

Energy Dep’t: We Can Force ‘Market Transformation’ for Appliances

Gold is the final refuge against universal currency debasement (Hat Tip: Brian B.)

KRUGMAN: BRING ON THE DEFAULTS

Boehner: Dems Have Time for Comedy, Not Tax Cuts, in Congress (Hat Tip: Brian B.)

EU Set Up Secret Group to Save Euro

EU Leaders Save the Union?

Those Who Know Will Understand (Hat Tip: Brian B.)

4 Charts That Show How Weak This Recovery Is

Here’s Why Housing Will Reach Bottom In 2014, Followed By A Decade Of Stagnation

China-Japan Tiff: A Trade Lesson for the U.S.

Unions: Democrat’s Own Extremists Taking The Local Parties Over?

Obama administration proposes that all international wire transfers to be reported (Hat Tip: Brian B.)

Should the US sell GM to China? (Hat Tip: Brian B.)

Unemployment Could Remain High Until 2013

They Are Printing Too Much Money

The Reality of Inflation

Food Inflation: Coming to the USA?

Interview: Dr. Marc Faber on the Federal Reserve and Hyperinflation

Get Ready to Pay More for Tires