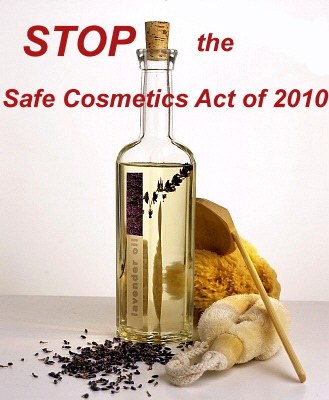 Cass Sunstein is apparently ‘nudging’ the cosmetics industry with the “Safe Cosmetics Act of 2010.” Your first big clue here are the sponsors of the bill: Reps. Jan Schakowsky (D-IL), Ed Markey (D-MA) and Tammy Baldwin (D-WI). What do they all have in common Johnny? Ding, ding, ding! The answer is – they are all Progressives… Working hand in hand with Sunstein, they’ll morph an anti-business nudge into a shove by regulating the industry to death.

While the bill seems harmless at first, it would actually force the cosmetic industry to adhere to a massive new regulatory structure from the FDA. Why? All in the name of the infamous precautionary principle. The so-called Campaign for Safe Cosmetics is aligning with other organizations that are pushing a bill not based on credible and established scientific principles. In fact, it throws out any notion of a proper scientific review process in favor of new regulations and bureaucracy that would far surpass any other FDA-regulated product category including food or drugs.

From the infamous creator of The Story of Stuff:

Story of Cosmetics, The Critique

A sampling of the new uber-regulations:

Read the CFSC’s statement here… You can also sign a petition against this anti-business, job-killing bill here.

As a small business owner, I can tell you that the above regulations will bankrupt large segments of the small business cosmetics industry. Business owners simply cannot afford all the time and expense required by these FDA regulations. Like so many other industries, the Obama administration and the FDA are putting a stranglehold on Cosmetics to siphon off profits, redistribute wealth and wield unlimited business and financial power over every move in the industry. In essence, the industry will be state-controlled and nationalized.

New start-ups will not be feasible as start-up costs will be too high. In the end, only the big boys will survive and these will be the ones with the government’s blessings. And it won’t just be makeup – this will affect soap, shampoo, deodorant, shaving cream, baby shampoo – really anything you use to keep yourself looking, feeling and smelling fresh. It creates an undue burden on the industry – if one tiny ingredient is changed, it has to be filed with the FDA and reverified all over again. Prices will skyrocket and products will be hard to get. Unemployment will also rise as employers will have to lay their employees off due to rising costs and regulation.

The politicians involved are not doing this for the people. I guarantee it is lining their coffers somewhere. You can’t put lipstick on this governmental pig.

A great article on this can be found here: The Safe Cosmetics Act 2010

The Safe Cosmetics Act of 2010 (SCA 2010), now before the House of Representatives, is an inappropriate and seriously flawed attempt to make cosmetics safer. You can read the full text here. The thinking behind it is identical to a bill that was proposed (and defeated on March 1st this year) in Colorado (see Tunnel vision). Both are the brainchild of a group including the Campaign for Safe Cosmetics (SFSC) and the Environmental Working Group (EWG) which are in turn linked to the Skin Deep database. SCA 2010 is being opposed by groups representing small businesses such as Opposesca.com, the Indie Beauty Network and Personal Care Truth which also reflects the views of many cosmetic chemists. A petition opposing SCA 2010 can be found here.

SCA 2010 is unscientific, unworkable, and if passed as is, would likely cause widespread job loss in the cosmetics industry. Far from being a step in the right direction, it would be a leap into regulatory chaos, as well as targeting small businesses and natural products.

Former China Adviser: US Dollar Is ‘One Step Nearer’ to Crisis

Apple And Caterpillar Have Broken The Stock Indices

Why Rip Off The Rich?

Obama To Attempt To Dismantle GOP’s ‘Pledge To America’

The Big Socialist Push is On (Hat Tip: Jean Stoner)

Morgan Stanley: Bond Mania Is Now Bigger Than Tech Mania Was During The .Com Bubble

Hussman: Sorry, But They’re Going To Have To Declare Another Recession Soon

Are European Leaders Completely Oblivious To What’s Happening In Their Own Debt Markets?

How Big Is The Housing Market’s Shadow Inventory Problem?

For the Unemployed Over 50, Fears of Never Working Again (Hat Tip: Jean Stoner)

The Lower Spending Solution to Deficits

Thousands may owe for unemployment overpayments

CALL FOR STRIKE — OVER ALL OF EUROPE

China to vault into top 3 at IMF under proposal

More, more, more MOAB: Bernanke Says U.S. Economic Growth Too Slow Even With Fed Bond Purchases. Gee, if the Fed just buys lots and lots of stocks and bonds, we’ll all be multi-trillionaiares, just like those wealthy Zimbabweans.

Debunking The Great Myth Of US Consumer Deleveraging, Or Why The US Economy Will End Not With A Whimper But A Bang

Trashing the dollar to save the economy.

Those Who Know Will Understand

Gold Through The Ages

I feel like the Forrest Gump of natural events.

Before heading to the US three weeks ago, my wife was terrified that we might experience one of California’s famous earthquakes.

The day before we were due to leave, our home town of Christchurch was rocked by our biggest ever earthquake – 7.1 on the Richter Scale.

Today, rolling down Highway 101 into Los Angeles we remarked on the extreme heat, but thought this must be normal for California. After passing a huge scrub fire at Thousand Oaks, we checked the temperature at 108 F. Then we found that downtown LA had its highest ever recorded temperature today at 113 F!

I was also there when New Zealand recorded its highest ever recorded temperature in 1972 or 3. I was at Rangiora High School, near Christchurch when that town sweltered at a record breaking 108 F.

On September 24, about 20 FBI agents spent most of the day searching the Logan Square residence of Chicago activists Stephanie Weiner and her husband, Joseph Iosbaker, reports the Chicago Tribune.

In 1998, the duo worked as leaders of the Chicago New Party, alongside Frankie Torres, Deborah McCoy, Jose Kader, Bob Palmer, Rafael Rodriguez (Board of Directors, Rosenberg Fund for Children), Yakira Nunez, Vinnie Izurieta, Pryianka Basu, Dave Rolston, and Mary Robles. Joe Iosbaker was at the time serving as Precinct Captain for Miguel del Valle in the 13th Ward (Remember that name, we investigate del Valle a little further down). He had been working election day at this same precinct for “progressive” candidates for about a decade – since far left Chicago mayor Harold Washington won re-election in 1987. Weiner and Iosbaker supported New Party candidate and member, Willie Delgado, in his bid for the 35th Ward seat in the Illinois House of Representatives.

Delgado had signed up for the New Party in 1995, along with Barack Obama, Lou Pardo and Communist Party supporter Alice Palmer. Like Obama himself, Delgado was also endorsed by the Chicago Democratic Socialists of America. In 1998, he won the seat against Elba Rodriguez by a very slim 241 votes. Delgado was to hold the seat until 2006.

As of 1995, Delgado was a key supporter of Illinois State Senator Miguel Del Valle. Del Valle had also enjoyed the endorsement of the Chicago Democratic Socialists of America. He met Barack Obama in 1992, when the latter was directing a voter-registration drive called Project Vote. In 1993, he was listed as a “contact or potential member” of Progressive Chicago (parent and sister-organization of the Chicago New Party). Then in the mid-90s, he was listed as a member of Friends of Alice Palmer, alongside Danny K. Davis, Tony Rezko, Timuel Black and Barack Obama. While both Illinois State Senators, Miguel Del Valle and Barack Obama, along with State Rep. Mary Flowers, were to work closely together with ACORN representative, April Troope, on the passage of “energy assistance legislation.”

In 2006, Del Valle left the Illinois State Senate, rewarding Willie Delgado’s ongoing support by appointing him to his old seat.

What was the New Party and what was Obama’s involvement?

The New Party was an electoral alliance dedicated to electing leftist candidates to office – usually through the Democratic Party. It dissolved in 1998. Three organizations formed the backbone of the New Party – the Democratic Socialists of America, the U.S.’s largest Marxist organization, ACORN and radical labor union SEIU. Also heavily involved were the Communist Party USA breakaway group Committees of Correspondence and far left “think tank” the Institute for Policy Studies.

Obama not only worked closely with these New Party candidates, he himself was both a member of the New Party and its parent organization Progressive Chicago. New Party News Spring 1996 page 1, celebrated Danny K. Davis’s Congressional victory and went on to say:

What goes around comes around. In 2004, Barack Obama was able to win his 2004 U.S. senate race by stitching together a coalition of socialist/communist dominated unions and “community organizations.”

He also received the backing of several independent Latino elected officials led by State Sen. Miguel del Valle, Rep. Cynthia Soto and Alderman Ray Colon. Alderman Joe Moore also backed Obama, as did USAction leader and Communist Party sympathizer William McNary. Returning the favor once again on the event of del Valle’s election as Chicago County Clerk in 2006, Obama stated, “I am thrilled that Miguel Del Valle is now our City Clerk and I can think of nobody better to serve out a full term than Miguel Del Valle.”

The New Party folded in 1998 after its voting tactics were ruled unconstitutional by the Supreme Court. The FBI is now undertaking what has become a high-profile investigation of former members of the organization. Was Barack Obama a member? Undoubtedly. Will the FBI investigate him? What do you think?