A lot goes into military flyovers at pro games during the National Anthem. Timing is everything and this video gives you a glimpse into how it’s done. **HAT TIP to Vic in Arizona–btw, Vic is the only person in Arizona who doesn’t have a blog!! We’re waiting…

Hat Tip: Brian B.
From: Just Piper and The Founding Patriots

If you want to open a can of worms, all you need to do is bring up the subject of reasonable identification. If you’re at the polling place, your Wal-Mart card might be just fine depending on the color of your skin; asking for government issued identification might be considered racism. If you pull over a car load of Hispanic individuals and none of them have identification, it’s racist to even consider the possibility of them being illegal aliens; but if you want to purchase cigarettes or alcohol you better have a valid driver’s license.

I was on the phone a while ago, setting up a job to replace a lost car key for an employee of a small company. It was a lease vehicle and I mentioned how he’d need to provide a copy of the lease agreement or an insurance card with that vehicle listed to meet the requirements of the law. I then extended the mandate to include DNA samples; but explained I was set up to obtain those samples on site. We both laughed; all the same we were laughing at the ridiculous measures being imposed by government when in reality these issues should be left to the individuals involved.

On the other side of that coin, a couple of months back I had a fellow in a company vehicle drive over to my office after I explained that I could replace his worn out key for a very reasonable price. No more wiggling and jiggling the ignition key to start the van. He asked if he could sign for it and send the bill to his company, Ista North America out of Jacksonville, Florida and I agreed, since it wasn’t a huge amount of money, but more than most folks carry in their billfold.

A month went by with no payment, so I called Ista North America out of Jacksonville, Florida, accounts receivables department only to be told no check would be sent because we were not listed on their payment sheet as having submitted a W-9 form. They acknowledged the debt, but withheld payment because of, “company policy.” It’s just my opinion, but it would appear Ista North America out of Jacksonville, Florida has manipulated company policy in order to keep from paying a just debt, some might call that dishonest.

Can you imagine what would happen if every time a customer came into the shop and we had to fill in a W-9 form prior to cutting a simple key? What’s reasonable becomes a can of worms, depending on whose asking or whose presenting.

That all leads up to an ugly piece of legislation being pushed by President Barack Obama, Lindsey Graham (RINO-SC) and Chuck Schumer (D-NY). They want to include mandated national biometric ID cards as part of the “comprehensive immigration reform” package. Anyone seeking employment would naturally be required to present their national ID card, but what about illegal aliens who work for cash under the table? Who, in reality, will be the target of such a national ID program?

This new national ID card would include a “unique biometric identifier,” like fingerprints, retinal scans or even a scan of the veins on the back of your hand. It will allow bureaucrats to watch your every move as the Federal Biometric ID cards will almost certainly be produced with RFID tracking technology. There will be a magnetic strip containing virtually unlimited amounts of personal information about you; like what guns you own, prescription medicines you take and other sensitive data.

Let’s push the envelope a little… What other personal information might be included? Is it conceivable political party membership could be included as our government becomes more totalitarian by the day? Imagine checking your boarding pass as you’re at the airport and being told you’re listed as a “domestic extremist” and are either turned away or worse, detained as an actual threat, because of your pro-gun or pro-constitutional leanings. You think it can’t happen…think again.

Back on April 16, 2009, Janet Napolitano defended the Department of Homeland Security report, a report forwarded as a warning to law enforcement officials on “rightwing extremism” which may include groups or individuals opposed to abortion and immigration or that reject federal authority in favor of state or local authority.

If the Department of Homeland Security did a simple Google search on my name they’d find all manner of articles written in opposition to the current regime’s take over of America. I’m proud to say I’m already listed as a suspected terrorist and have my certificate issued by the Department of Homeland Security and signed by Napolitano. Would my political leanings ever become a valid reason to deny getting on an airplane or my purchase of a firearm in the future? 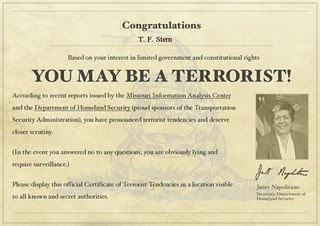 So, what’s reasonable when it comes to asking for identification? Should voters present some form of valid government issued ID prior to stepping into the polls? The same folks who are pressing for Biometric ID for all citizens, seem to think it’s racist to even ask such a question. Hypocrites and liars, that’s my opinion. At least we’ve identified a few more hypocrites and liars.