According to Karl Marx, the following ten elements were requisite conditions for “a transition from capitalism to communism.”

1. Abolition of property in land and application of all rents of land to public purposes. Washington Examiner: The great Obama land grab: “White House officials have been meeting quietly with environmental groups to map out government plans for acquiring untold millions of acres of both public and private land… The federal government, as the memo boasted, is the nation’s ‘largest land manager.’ It already owns roughly one of every three acres in the United States… This is apparently not enough.”

3. Abolition of all right of inheritance. USA Today: “Estate tax to return in 2011, and it could hurt ordinary folks.”

4. Confiscation of the property of all emigrants [those leaving the country] and rebels. New York Post: The President’s new jobs-killer: “…President Obama explicitly targeted the industry for two massive tax hikes. First, he’d ban oil and gas companies from using the ‘Section 199’ tax credit, a measure for domestic manufacturers enacted in 2004 to boost US employment… Second, he wants to end ‘dual capacity’ protection for US energy firms… Without this shield against double taxation on foreign revenues, American companies would be competing on an uneven global playing field… Yet, by the federal government’s own economic model, these tax hikes would lead to huge, immediate job losses.”

5. Centralization of credit in the hands of the State, by means of a national bank with State capital and an exclusive monopoly. New York Post: Democrats, Fannie Mae still issuing subprime loans, even after melt…. And CNS News: Obama to Nationalize Student Lending with Pending Budget Bill.

6. Centralization of the means of communication and transport in the hands of the State. Tom’s Hardware: “Bill Allows Obama Power to Shut Down Internet.” And “Advertisers on talk radio targeted by Congressional investigations.” And “In an exclusive interview with Rolling Stone Magazine, President Ob….”

7. Extension of factories and instruments of production owned by the State; the bringing into cultivation of waste-lands, and the improvement of the soil generally in accordance with a common plan. National Legal and Policy Center: “Obama Arranges Takeover of GM and Chrysler; Auto Workers Union Gets….” And Discover: “New EPA Rules Clamp Down on Mountaintop Removal Coal Mining.” And News 9 Oklahoma: “EPA to Crack Down on Farm Dust.”

9. Combination of agriculture with manufacturing industries; gradual abolition of the distinction between town and country, by a more equitable distribution of the population over the country. Heritage: “The Clean Water Restoration Act Means Troubled Waters For Property …“: “…The Waxman-Markey global warming bill is far and away the most worrisome environmental measure currently working its way through Congress, but it is certainly not the only cause for concern… S. 787, the Clean Water Restoration Act (CWRA)… would do much more harm than good, especially for farmers, ranchers, developers, energy producers, and other property owners.”

10. Free education for all children in public schools. Abolition of children’s factory labor in its present form. Combination of education with industrial production. New York Sun: “Obama Tells Teachers Union He Opposes Vouchers.” And Big Hollywood: “[Teachers’ Union] NEA: Obama’s Ministry of Propaganda.” According to Karl Marx, the following ten elements were requisite conditions for “a transition from capitalism to communism.”

Now, given all of these facts: can there be any doubt what Barack Obama meant when he twice proposed, “a civilian national security force that’s just as powerful, just as strong, just as well-funded” as our military?

The midterm elections in November represent our last chance to salvage the American experiment.

Marshal your parents, your children, your siblings, your neighbors, your coworkers — marshal everyone you know, because the stakes could not be higher.

Most folks were unaware of the hidden perils within the recently passed Health Care Reform bill many now call “Obamacare.” Remember, “We have to pass it before we know what’s in it.” One item of interest turned out to be the federal government taking over all student loans; private lending institutions will no longer be making them.

The other day there was a news article on Vision of America’s website, Feds Plan to Control All Schools with Regulations. It referenced a piece of legislation which required input; but the date of such input had long passed and must be considered as having been implemented since the article also suggested this would go into effect as early as November.

I was able to find another article on the same subject written by John Andrews back in August which had to do with the government takeover of private colleges. If you think about it, the U.S. Department of Education will now be in control of every aspect of public and private schools; a frightening thought if ever there was one.

“Accreditation, the gateway to academic and financial viability for all colleges and universities, whether tax-supported or not, would (be) made conditional upon state regulation and authorization for the first time ever.

By specifying that such regulation be “substantive” and that “adverse action” be part of the authorization process, the pending federal rule would plunge private higher education into the maelstrom of ideological agendas and interest-group politics in 50 state capitals.

Former US Senator Bill Armstrong, now president of Colorado Christian University, warned in a July 30 letter to the US Department of Education that this could mean the all-out politicization of American higher education, endangering academic freedom, due process, and First Amendment rights.”

In simple terms, higher education would be at the mercy of whichever political party was in power and held the purse strings. You might recall Obama having religious symbols covered during a recent trip to Georgetown University; a hint of things to come?

This afternoon on the BYU television channel, there was an hour program about the LDS Church in Kiev, Ukraine. It gave a brief history of the area and how important having a temple built in Kiev (pronounced Keeve as opposed to Key-Ev) was to church members in that area.

I mention this for one reason; they interviewed one fellow who’d been an atheist most of his life. He eventually found his way with the help of a couple of Mormon missionaries and became a member of the Church. He made a statement which chilled me to the bone as I recalled how our government was systematically taking over public education while at the same time making it more difficult to bring up the subject of religion, particularly the mention of God or Jesus Christ.

“In college we were taught there was no God,” translated via an interpreter in a matter of fact way as if to indicate that such was the policy throughout the communist country.

Communist government school policy teaches there is no God, a political necessity for government to take the place of God. Inalienable rights; you can forget them, because if there is no God then there are no such inalienable rights. Government decides who gets to do everything at the expense of individual liberty. Isn’t that the path we are on now here in America, an intentional rewriting of history in order to blur and then eradicate any mention of our nation having been founded on Christian principles?

I found a quote by Bob Schaffer, Chairman, Colorado State Board of Education, on a site called Physics Forum relating to the take over of colleges and universities by the federal government:

“The historic strength of the American higher-education system can be directly attributed to its independence from government agents and political authorities. Seizing authority from the academic private sector and moving it wholly to the government-bureaucracy sector is the quickest way to terminate the intellectual freedom that has set America apart from every other nation and has made our society the most prosperous in the history of human civilization.”

If red flags of warning are not getting your attention then you are deaf, dumb and blind; no disrespect to those without the ability to hear, speak or see. Our government will now be able to decide who gets to attend institutions of higher education and the curriculum which will be taught. America is in trouble and come November we need to make every effort to stop the runaway train that’s headed at an ever increasing speed toward total destruction of the American way of life intended by our Creator.

This article has been cross posted to The Moral Liberal, a publication whose banner reads, “Defending The Judeo-Christian Ethic, Limited Government & The American Constitution.”

Scott Baker at The Blaze points out the difference between the mall following the 8/28 Restoring Honor rally and the aftermath following the One Nation rally. 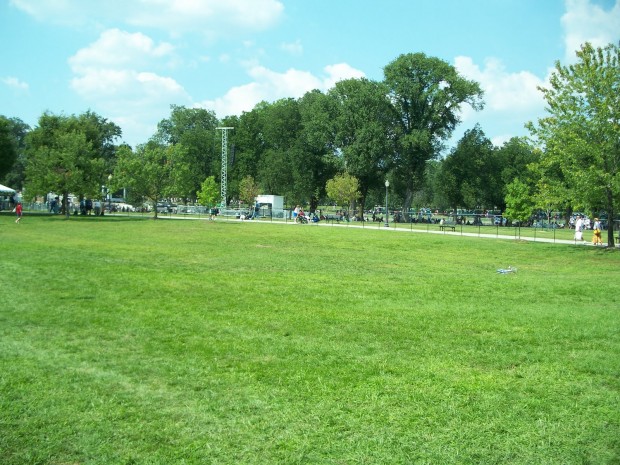 Here’s the mall following the 10/2 rally: 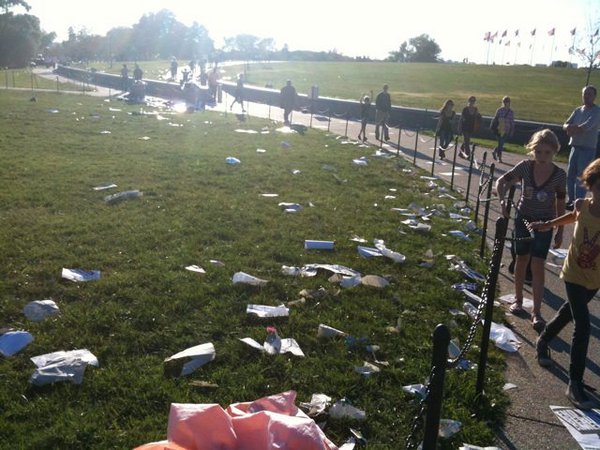 And it looks as if some “One Nation” attendees at least attempted to find the trash can: 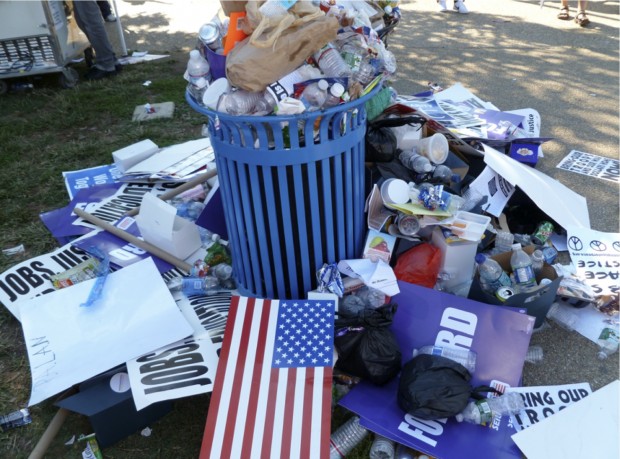 The following video is even more of an eye-opener:

Marxist propagandic manipulation at its finest… What a stupid comment.

I guess you can be killed for telling the truth now – at least in a cartoon and probably soon to come to your nearest reality. For shame… Beck is a true patriot and definitely one of the good guys…

Glenn has been mocked, parodied, pilloried, satirized, smeared, caricatured and lampooned in just about every conceivable way. But this, to our knowledge, is the first long-form Donald Duck cartoon remix to explore Glenn’s “seemingly sympathetic voice.” Don’t miss the violent ending!

This is a re-imagined Donald Duck cartoon remix constructed using dozens of classic Walt Disney cartoons from the 1930s to 1960s. Donald’s life is turned upside-down by the current economic crisis and he finds himself unemployed and falling behind on his house payments. As his frustration turns into despair Donald discovers a seemingly sympathetic voice coming from his radio named Glenn Beck.

Jarrett Refuses to Back Emanuel for Chicago Mayor