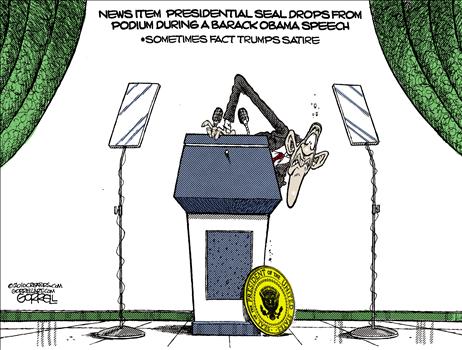 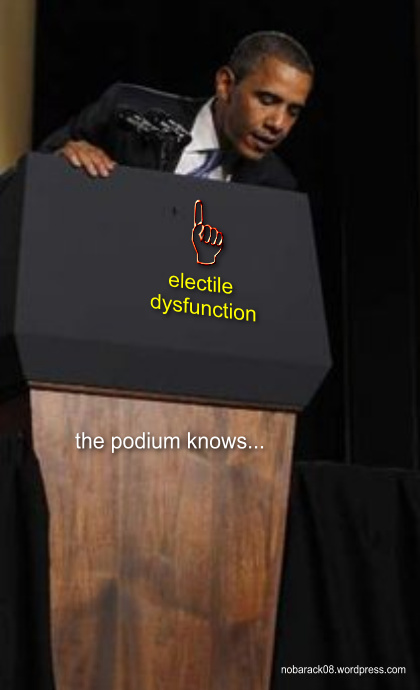 From “Barry Soetoro” who writes:

I couldn’t help myself with this one.

2. AN EXECUTIVE ARM GROWING AT THE EXPENSE OF THE LEGISLATIVE AND JUDICIAL ARMS.

3. THE CONTROL OF BANKING, CREDIT AND SECURITY EXCHANGES BY THE GOVERNMENT.

4. THE UNDERWRITING OF EMPLOYMENT BY THE GOVERNMENT, EITHER THROUGH ARMAMENTS OR PUBLIC WORKS.

5. THE UNDERWRITING OF SOCIAL SECURITY BY THE GOVERNMENT – OLD-AGE PENSIONS, MOTHERS’ PENSIONS, UNEMPLOYMENT INSURANCE AND THE LIKE.

6. THE UNDERWRITING OF GOOD HOUSING AND MEDICAL CARE, BY THE GOVERNMENT.

7. THE USE OF THE DEFICIT SPENDING TECHNIQUE TO FINANCE THESE UNDERWRITINGS. THE ANNUALLY BALANCED BUDGET HAS LOST ITS OLD-TIME SANCTITY.

8. THE ABANDONMENT OF GOLD IN FAVOR OF MANAGED CURRENCIES

9. THE CONTROL OF FOREIGN TRADE BY THE GOVERNMENT, WITH INCREASING EMPHASIS ON BILATERAL AGREEMENTS AND BARTER DEALS .

10. THE CONTROL OF NATURAL RESOURCES, WITH INCREASING EMPHASIS ON SELF-SUFFICIENCY.

12. THE CONTROL OF TRANSPORTATION – RAILWAYS, HIGHWAYS, AIRWAYS AND WATERWAYS.

13. THE CONTROL OF AGRICULTURAL PRODUCTION.

14. THE CONTROL OF LABOR ORGANIZATIONS, OFTEN TO THE POINT OF PROHIBITING STRIKES.

15. THE ENLISTMENT OF YOUNG MEN AND WOMEN IN YOUTH CORPS DEVOTED TO HEALTH, DISCIPLINE, COMMUNITY SERVICE AND IDEOLOGIES CONSISTENT WITH THOSE OF THE AUTHORITIES.

16. HEAVY TAXATION, WITH SPECIAL EMPHASIS ON THE ESTATES AND INCOMES OF THE RICH.

17. NOT MUCH “TAKING OVER” OF PROPERTY OR INDUSTRIES IN THE OLD SOCIALISTIC SENSE. THE FORMULA APPEARS TO BE CONTROL WITHOUT OWNERSHIP. IT IS INTERESTING TO RECALL THE SAME FORMULA IS USED BY THE MANAGEMENT OF GREAT CORPORATIONS IN DEPRIVING STOCKHOLDERS OF POWER.

18. THE STATE CONTROL OF COMMUNICATIONS AND PROPAGANDA.

A key organizer of last Saturday’s “progressive” One Nation Rally in Washington DC was linked to one of the most violent incidents in US political history – the 1979 “Greensboro Massacre.”

Roz Pelles, the Washington DC based Civil Rights Director of the AFL-CIO served as one of three key “senior managers” of the rally – her official title “Steering Committee Liaison.”

The rally drew up to 140,000 Democrats, labor unionists, activists, communists and socialists to the capital in a major show of support for President Barack Obama and the Democratic Party.

The rally was overtly touted as a counter to Glenn Beck’s earlier and much larger rally of 8/28.

Thirty years earlier, Roz Pelles and her comrade and husband Don Pelles, were leaders of a radical and sometimes violent Maoist sect known as the Workers Voice Organization or Communist Workers Party.

The CWP followed Mao Tse Tung, Joseph Stalin, Pol Pot and for a time, the Islamic revolutionaries of Iran. The party also emphasized unionization and “self determination” for black Americans.

This led the CWP into direct confrontation with the North Carolina Ku Klux Klan.

In July 1979, the Klan held a rally and viewing of the pro-Klan film, The Birth of a Nation, in China Grove near Greensboro NC. This rally was violently attacked by CWP members who assaulted Klansmen with clubs and burned a Confederate flag.

CWP leader Paul Bermanzohn then taunted the Klan, “to attend our rally in Greensboro.”

On November 3, 1979, members of the KKK and the American Nazi Party attacked a CWP “Death to the Klan!” rally.

During the rally, a caravan of cars containing Klansmen and Nazis drove by the housing projects where the CWP and other anti-Klan activists were congregating. Several marchers began to attack the Klansmens’ cars with small wooden sticks or by throwing rocks. According to witness Frazier Glenn Miller, the first shots were fired from a handgun by an anti-Klan demonstrator.

Klansmen and Nazis fired with shotguns, rifles and pistols. An 88 second gun battle followed, leaving the outgunned CWP members and their allies with 5 dead or dying and 10 injured. 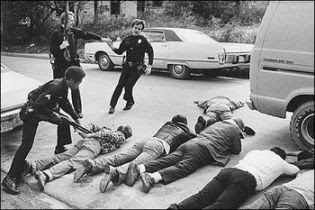 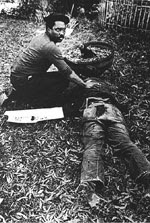 Forty Klansmen and Nazis, and several CWP/WVO members were involved in the shootings; 16 Klansmen and Nazis were arrested and the 6 best cases were brought to trial first. Two criminal trials resulted in the acquittal of all defendants, though in a 1985 civil lawsuit, the survivors won a $350,000 judgment against the city, the KKK and the Nazi Party for violating the civil rights of the demonstrators.

Both Roz and Don Pelles were at the scene, with Roz assuming a leadership role as more senior CWP comrades were killed or wounded.

According to the testimony of Don Pelles:

Pretty soon after that I ran into Roz (Pelles) who was pretty frantic who had been looking for me. And she realized that she was in charge, as all the other leaders were gone. That all of the WVO leadership were either dead or incapacitated so she was kind of the ranking leadership there.

Twenty one years later, Roz Pelles was a leader of another controversial organization, the Black Radical Congress.

A creation of the Communist Party USA, Committees of Correspondence, Freedom Road Socialist Organization, Democratic Socialists of America and some veterans of the CWP, the BRC sought to unite leftist blacks into a united revolutionary front.

It shows how much the U.S. labor movement has lost its way that the AFL-CIO would appoint someone like Roz Pelles to a key civil rights position.

It shows how out of touch is the US “progressive” movement that someone of Roz Pelles’ background would be entrusted with such an important position. Let alone be appointed to be one of the three “senior managers” of a progressive rally which would be endorsed by the Democrats’ organizing arm, Organizing for America.

Many US “progressives” regard Glenn Beck supporters and Tea Party activists as little better than the Klan.

God forbid that Roz Pelles’ modern comrades will try to provoke violence in order to discredit their Tea Party opponents.

No sane person wants to see any more bodies on the streets of America.

Dinesh D’Souza on the “Roots of Obama’s Rage.”